An Interview With Annette Adler 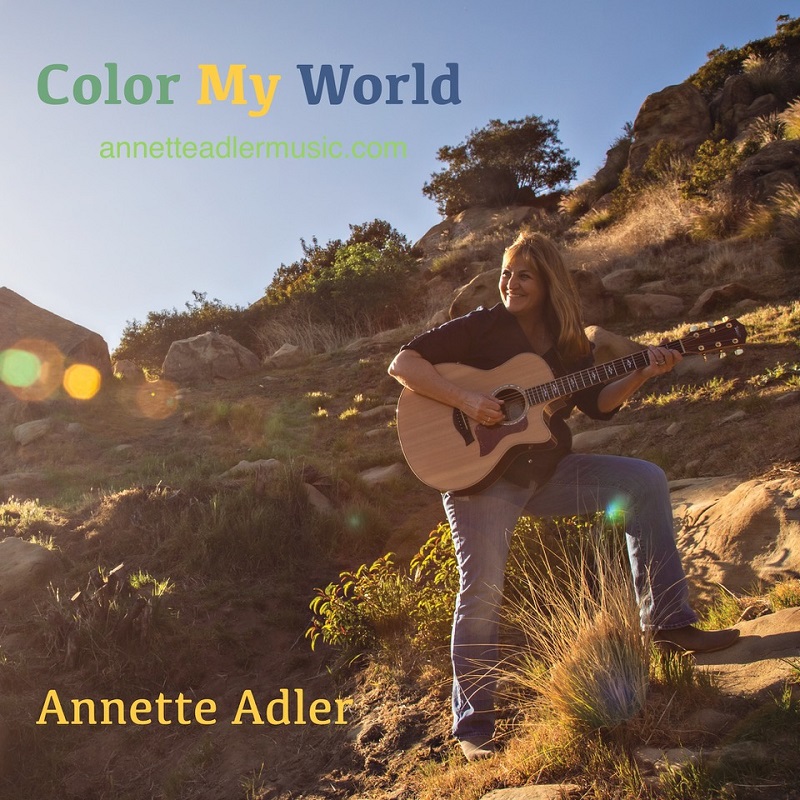 A new album released from Annette Adler is an opus of folk and classic rock lined with contamporary pop and passionate performances through and through.

The Color My World album is indeed quite colorful as it's lush vocal hamronies, organs, and driving acoustic guitars bring the aesthetic of classic rock tracks from decades passed.

Piano ballads that feel almost theatrical, a powerful vocal pallet, and inspirational to boot, the record shows a shining example of an experienced songwriter hitting her peak.

Songs come off powerful and moving, bright and polished as she tells stories and gets as descriptive as she likes.

You can feel the love she has for her craft and the life and heart that went into these songs.

Elements of Bowie peak through at times as vocals have an echo and percussion build.

Adler knows exactly how to get someone hooked on the sound, how to produce well, and how to use her voice as an instrument.

The artist holds nothing back in the way of encouraging us all to work together and do things right.

Adler is an absolute inspiration and with such a massive new album we wanted to have a talk with her about where it all really came from.

TSWS: Okay so let's begin with the Color My World album. This was a vibrant and beautifully woven record. Where did this album come from?

Annette: Hi Gabe! Thank you for this opportunity to talk about my album and for the kind words.  Color My World came from a lifetime love of music and finally the chance to sing about life and the love of my family.

TSWS: I'm hearing several styles on the record. What are some of your biggest musical influences?

Annette: I have never fit into one genre.  I so appreciate this time in music where it feels like artists are more able to explore what interests them.  With that said, I absolutely pulled from my all of my female music heroes.  My Top 10 include: Stevie Nicks, Patsy Cline, Mary Chapin Carpenter, Heart, The Judds, Sheryl Crow, Bonnie Raitt, The Chicks, Linda Ronstadt and Joni Mitchell!

Annette: I have been involved in music in one way or another my entire life. I began at an early age playing classical guitar and singing in all of the school choirs and plays. In college I became a professional wedding singer, which was a blast. I then got a great job in Creative Services working for Capitol/EMI Records where I learned SO much about the business.  When I had my boys, it was time to focus on them so I found a way to keep making music by becoming a general music teacher at an elementary school for kids preschool age to 5th grade.  That was an incredible experience!  I met two other moms there who were recording artists and we started gigging around town as “The Mama Bears" and it got my songwriting juices going. When my sons entered college, I decided it was my turn.  I met a talented young producer named Aaron Liebman and we started to make an EP, but once we got rolling I knew we had enough material for an album and I’m so thankful that I was able to include so many songs on Color My World!

Annette: Mostly relationships and the relatable truth that comes from them. Much of this album is about my family and friends.  In fact I’m thrilled to say that my whole family sing with me on this album.  It makes me smile ear to ear every time I hear their voices on the recordings.

Annette: I love this question!  Because when you let yourself take a break for a minute, that is where the new ideas develop!  I am either at the beach, snow skiing or working with my husband on our broadcast television business.

TSWS: This alsum seems like a pretty big undertaking. What sort of advice would you have for up and coming artists out there?

First of all, I’d say don’t take as long to begin as I did!  While waiting did give my songs a good perspective, I wish I had a bigger body of work by now.  So I am making up for lost time, I have another set of songs getting ready to record!  The next thing I’d say is to fight for your truth.  Don’t let other people’s opinions sway what your sound or songs should be like.  You know what’s right in your heart, do not lost yourself!

Annette: 1000%  I was hugely disappointed to not be able to throw a swinging release party for Color My World due to COVID. So that WILL happen at some point.  Otherwise, I adore playing out so much so that during the pandemic, my bass player neighbor and I began a lawn concert series, it was very well received.  I also began a YouTube show called Annette’s Duets where I interview artists I admire, and then we socially distance duet on a couple of songs.  These two outlets saved my creative soul during lockdown!  In the future, I cannot wait to get “On The Road Again."

Annette: I’ve been studying the music of my singing partners The Mama Bears, Mairead MacMullan and Kelly Macleod because we are about to start rehearsing again and we love to perform each others music.

Annette: The Peppermint Patty, I will stand by my choice!

Annette: Thank you so much for taking the time to listen and take in the messages in my songs! It feels so vulnerable when you put your music out to the world, and is so rewarding when you find that people react to what you are trying to say. The gratitude never goes away!

Thank you to The Sounds Won’t Stop for the generous interview!