An Interview With Kete Bowers 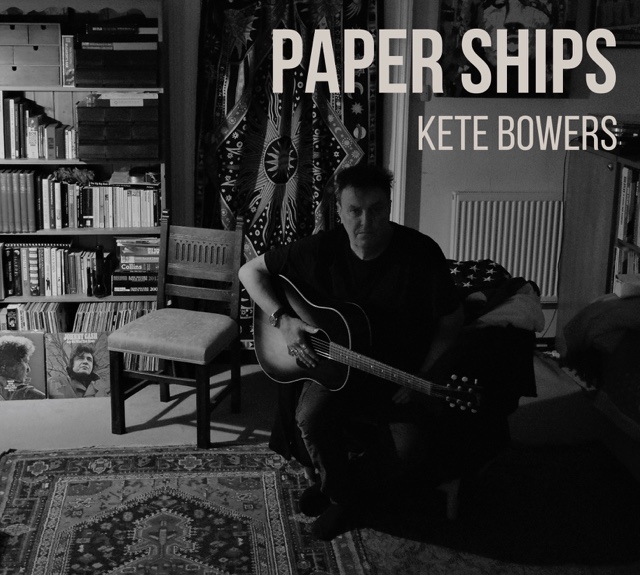 Songwriter Kete Bowers just dropped  a full length album right into our laps and it's a deepening and engulfing record that reaches into what feels like an edgier side of folk rock by blending alternative undertones and a touch of tasteful darkness to the music.

The Paper Ships album is riddled with acoustic guitars coated with electric chords and widening organs and keys that show the artists classic rock influences shining through.

Songs grow and sway, they wash over you and can grab hold of you quickly.

Paper Ships is a whole lot to soak in but once you start, it's very difficult not to finish as the record  feels like a concept  album at times.

There are songs that give off a more stripped down feel crossing Nick Cave with Johnny Cash and throwing in some Nick Drake on top.

If you listen through the full record, you will feel like you've just watched a film and have to stand up, look around the room, and shake it off.

This album can haunt you, it can lift you up just as easily. Either way it'll  dig into you in some way.

WIth such an existential release, we wanted to sit down with Bowers to talk about the record and more. Here's what happened.

TSWS: Okay so let's start with the Paper Ships record. This album is  like a folk rock record with a country undertone and an alternative edge. Where did this record come from?

Kete: The songs are about my time living in Liverpool and Birkenhead based on years from 1978 through to 1985 when I left and moved South to look for work. I was born in Birkenhead and watched its steady decline along with Liverpool just across the river.

I had a happy childhood but late 70’s onwards there was awful poverty no work and a feeling of no hope just helplessness....

TSWS: Going through the album it almost feels like a concept record of sorts. Is that correct?

TSWS: These songs have such a great variety of styles to them. What bands and artists really influenced you?

When I got to 14 I was listening to Dylan, Leonard Cohen, Tom Waits, Bowie, Zeppelin, Stones etc...

Kete: I’m late to the party I only really started writing in 2010 life previously got in the way...

TSWS: Did you used to perform alive at all? Will you be focusing on life shows when the time comes?

Kete: I’m looking forward to playing live and hopefully when the virus ends put a band together that I’m now in the process of writing new songs for that are more band related, I

Kete: I’m in the process of looking for management at the minute and a producer to work on my next album with.