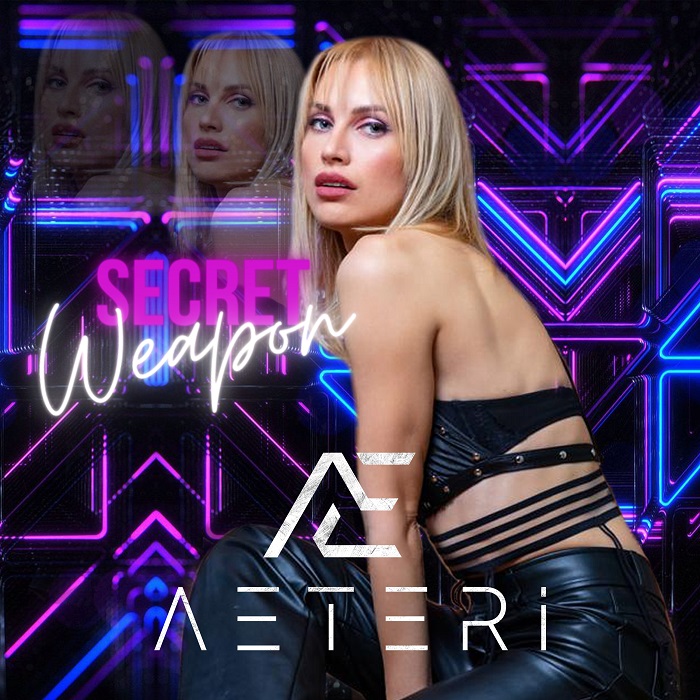 Aeteri just released a fresh dance-pop banger with all the elements of a good, driving track laced with textured synth work, and a killer energy that lasts throughout the song's course.

"Secret Weapon" is pure fun and comes through with an almost alternative edge as keys and synths cut, pianos soften things up, and that dance arrangement crushes.

The song has a shine and feels incredibly vibrant and there are as many musical hooks as there are vocal ones.

The singing is passionately performed and lush with addictive melodies and a chorus that brings everything together in a way that has you singing along by the second time around.

This single is an up swing danceable and crisp feeling one that all has the tonality of a summer night spent on the dance floor having a great time.

The artist's vocals are incredibly alluring and smooth while keeping that edge and energy high.

It's all done with a certain gracefulness and the whole thing sounds sweet but packs a punch as well.

This track should be in one of those revenge films where the female lead is trained and let loose to beat up the bad guys.

The video that accompanies the single is also outstanding to watch and gives an even better idea of Aeteri's character and presence as an artist.

With such a great single release, we had to have a chat with her to find out how it all started and where it's all headed.

Here is how it went down.

TSWS: Okay so let's start with the "Secret Weapon" single. This track has a bright and edgy dance -pop vibe to it! Where did this track come from?

- Secret Weapon was the first track that I produced without any kind of demo. I used to be more on the singer/songwriter side before - working on a song, making a demo and only then arranging the song. But in this particular track I tried to think more as a producer or DJ - making music first. It gave the song this kinda EDM feel. Then I was surfing the FabFilter website looking for some new plugins and accidentally saw their merch with the slogan "My secret Weapon" - and that's where the idea for the name of the track came from. The dance-pop vibe is what I'm after in general - always loved that kind of music.

TSWS: I'm hearing several pop styles here. Who are some of your biggest musical influences?

- As a singer I am influenced a lot by Dua Lipa, Sia, Rihanna and Adele as I love strong vocals. As a producer I take my influences from Martin Garrix, Calvin Harris, Alan Walker, David Guetta. "Secret Weapon" was also influenced by Katy Perry's track "Dark Horse" produced by Max Martin.I'm kind of both of those styles - pop and EDM/ house combined. And don't forget about my classical background and my love for pure harmonies

TSWS: I have to talk about the video. What a great polish and style! Where did this idea come from?

- Thank you. The idea of the video was elaborated together with the video producer Anja Simic. The song starts with the phrase 'may the bridges that I burn lighten all the way up for me' - which is like a manifestation of burning the past for the sake of the future. That's where the idea with the fire comes from. The burning triangle is also a symbol of fire. The video basically tells a story of a girl's liberation - from toxic relationships, unsatisfying job opportunities, which were a result of her own limiting beliefs and thoughts, that have been keeping her from doing what she really wanted.Our dancing duo with my friend Milos deserves a special mention too. It was a complete freestyle improvisation at the beginning, but we managed to make a whole choreography out of it. We took our inspiration from the music video "Breathe" by Jax Jones. It was a bit of a challenge to make this video happen, to be honest, as a lot of things went wrong, like for example, the weather (it wouldn't stop raining), or the fact that my hair just went completely green a couple of days before the shooting after having swum in a pool

But I enjoyed every moment of making this video and am 100% happy with the final result.

- It started a long time ago when I was a child - I always knew I wanted to be a singer, to be on stage. I spent a lot of time studying though - I studied classical opera singing and theatre performance and have been working on classical stage for a while (which is probably a good thing in the end). But I was always attracted to dance and pop music. So during the day I was kinda good college student, but when the weekend hit - I'd be one of the party girls who would dance her heads off in a club

- Definitely more music, more content, more engagement. I'm working on 2 new songs at the moment that are almost finished production-wise. One of them is a collaboration with Nick Brago, a brilliant young producer from Italy. I also want to make a remix of the "Secret Weapon" to make it more of a club song.

Since I left opera singing, I work in a hair salon to pay for my bills. I'm a pretty good hair colorist by the way. I've also got a 6 yo child, Filipp, who I love dearly. Apart from that I love travelling, meeting up with friends and going out for sure!

- As the gigs are coming back, I'm planning to do more of those. I want to try myself as a DJ too, so let's see.But my main focus of course is making my own music.

- I'm using Ableton Live 11 and a bunch of third-party plugins. Gearwise I'm using a Scarlett audio interface, Novation midi keyboard and Ableton Push. I've got really good OLLO headphones and a decent Scarlett mic for now, but I might go for an upgrade soon. I record my tracks at home, in my home studio in London. But I also carry some of the gear with me when travelling - for example the high vocal passage for the 'Secret Weapon' was recorded during my stay in Belgrade in July 2021.

- Lots of random tracks to be honest. If you ask me about the names, I'd say Martin Garrix, Dua Lipa, Sofia Carson, Kygo, Calvin Harrris, Sam Smith, David Guetta, Don Diablo... There are lots of new artists from Soundcloud that I like listening to too - it happens all the time that I like some random songs from someone's playlist.

- Yes. I always do listening parties together with online concerts for my releases, so there will be more. I've already mentioned gigs - there's an amazing guitarist and sound engineer named Adam, we're rehearsing some popular songs with him right now.
What kind of advice would you have for other up and coming artists out there?
- Well, the only advice I can give is to believe in yourself and to enjoy every step of the way.

- My music is available on all digital platforms and streaming services like Spotify and Apple Music. And on Youtube of course - there you can find my music videos.

TSWS: You wake up in the middle of the night starving. What is your go-to midnight snack? (a question of character)

- I'd probably eat a handful of nuts and drink a glass of water. I also might end up eating a salmon sandwich if it gets too bad

- Thanks for being with me! All I'm doing is possible because you're giving me your support and love. I love you all!