An Interview With Alex Spinney 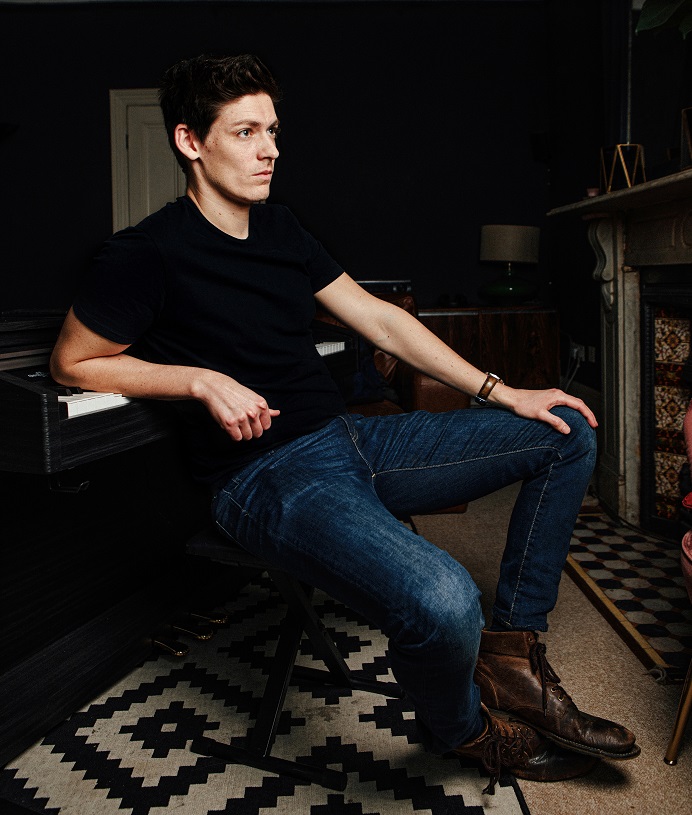 Alex Spinney just dropped a beautiful new single that borders contemporary pop and gives a warming and heartfelt feel with gospel like vocals and a piano backbone.

"I Remember" is a touching and soulful track that brings a cinematic undertone and a vibrant energy and presence that touches on R&B and a smooth live band vibe as the band feeds off of each other energies throughout the songs course.

The single is impactful and lush as the vocals surround you and organs fill the air. It all has a sort of uplifting feel and its very honest lyrically as well.

The song makes you want to stand up and sing along as the whole thing radiates a type of love that triggers memories of our own to pop into your head without expecting it.

Spinney's character and attitude comes through clear as day and its as welcoming as you can get.

The release feels like getting a hug from someone you haven't seen in a long time.

His passion for what he does is incredibly evident and the song is well produced and feels alive as it plays on.

Drums and piano grow intense as the vocals do and the song hits its powerful climax and swells down and calms back into its beginnings.

Quite the musical journey in quite a short amount of time really.

This was more than memorable from start to finish and really lets the artist shine.

With such a wonderful release, we wanted to have a talk with Alex to find out where exactly this track came from and what may be next for him as an artist.

TSWS: Let's start things off with "I Remember". This was a beautiful track that boasted an almost gospel pop tone. Where did this song come from?

I originally wrote the basis of this song about 4 years ago in a tiny room in North London, with just the chords and the melody mapped out. About 2 years and a lot of life later, I finally came back to it. I managed to fish out the recording of it on my old phone, added lyrics and fleshed out the structure, before finally getting into the studio to record it earlier this year.

I'm calling it a piano ballad within a gospel pop anthem, if that makes any sense?! To me, the song has a simple but heartbreaking message - that feeling of looking back at a relationship that was once thriving, but has now broken down.

I've decided to pair that inherent sadness with an increasing sense of musical joy. Basically, the melody that I had written felt like it was calling out for some sort of gospel interpretation, and I also just love the vocal freedom that gospel and soul gives you. Therefore I decided to kind of join the two worlds up together, where the song starts as a piano ballad, and then gradually grows until it's morphed into this celebratory, gospel-like anthem. I find it really interesting when sad songs are treated with optimism, and I guess it almost reframes the situation as well.

(Sorry, that was such a long answer!)

TSWS: There are several pop styles going on here. Who are some of your biggest musical influences really?

Musically, the people I look up to are people like John Legend, Elton John, Lady Gaga and Sia. All are quite varied in genre, but I'd classify them as true pop vocalists, who are also musicians and songwriters, that have each been able to create such a strong musical identity.

TSWS: How much of this track are you performing?

I'm performing all of the vocals and all of the piano and organ. I would love to say that the guitars and drums are me, but they absolutely aren't!

Well, I've been playing piano and singing since the age of about 4, and then writing music since the age of about 14 or 15. However, I never took songwriting particularly seriously, and if I'm honest, I didn't think that the world of commercial music was the right place for me. I spent a number of years doing a different kind of performing, but always felt like there was another way I wanted to be expressing myself.

A few years ago, I had a big injury that took me out of the performing world for quite a while. During that time, I began to write properly, and it just felt so much more authentic to me, both as a singer and as an individual. So about three years ago, I decided to fully commit to it, and properly invest in and work on my own music. Since then, I've been fully dedicated to writing, and preparing my music for release.

TSWS: What do you do when you're not working on music?

Well, in my other job I actually teach maths, which I genuinely find really enjoyable, as it's pretty different to music! Then in my spare time, I do watch a lot of films/TV (highbrow and lowbrow, probably more of the latter...), play tennis and go to the gym, and then also make sure I see my friends, especially after lockdown. Sorry, that was the most uncreative answer to that question ever, I blame the amount of times I've had to write about myself on dating apps...

TSWS: With things slowly getting better, are there any plans for live performances?

Yes definitely, I think I'll be aiming to start properly doing these in early 2022, as before then I'm doing lots of recording and releasing.

TSWS: This song feels very personal. Do you utilize music to express inner emotions and thoughts? What inspires you to write?

I'd say it is pretty personal, but I'd like to think that it can be vague enough for other people to be able to attach their own meaning to the song. Music will always be one of my strongest forms of self-expression, so I think I do use it in that way, although maybe not as directly as one would think.

Other music inspires me to write! Especially if I'm jealous of a song that I hear and wish I had written it - I'm like, let me have a go! I do find it pretty tricky to write a song if I don't have a connection to the material, so my own life experiences definitely inspire me to write.

Well I absolutely love Griff, who won the BRIT Breakthrough Artist award this year, I think she makes pop music that is so engaging, really current and yet still so emotive. Then I also love other pop artists like Lauv, Miley Cyrus, James Arthur, HAIM and Sam Fender, and then even more folk and country artists like Kasey Musgraves and Alison Krauss.

Well, releasing this EP firstly! It's been in the works for about 2.5 years so I want to get that out, and then start gigging, writing more, recording more and potentially doing some collabs.

TSWS: Can we expect any music videos from you anytime soon?

You can expect two! Well, I've already filmed the music video for 'I Remember', which is a classic, performance-based video, filmed on my own piano in a studio off Brick Lane. Then in a few days I'm heading up to North Wales to shoot a big music video for my 2nd single!

TSWS: What is your absolute favorite thing about creating new songs?

The fact that I'm making the decisions! I get to sing the way I want to sing, and I get to express myself in the way I want to. There can be some self-consciousness with that, but it's mainly quite liberating.

TSWS: What other things influence you besides artists and bands? Films, etc?

Definitely films and TV. I was watching the Before Trilogy (a set of Richard Linklater films) with my housemates in lockdown, and at one point Julie Delpy's character plays her own waltz-like song on the guitar. The next day, I had written (half of) a waltz song! That's quite a literal influence haha, often it's the actual plot and cinematography that might give me an idea instead.

TSWS: I'm assuming piano was your first instrument. Is that right?

Indeed! I begged my parents to let me play the piano aged 4. My teacher was reluctant to take on such a young child, but she gave me 15 minutes a lesson to see how I'd get on, and I just loved it, so I continued learning from there.

Well, thank you?! To be honest, it would mean so much to me if people connected with this song, in whatever way. From here I'm just excited to share more, I've got a nice amount of variety on the EP, so please just get in touch and get ready for more music!