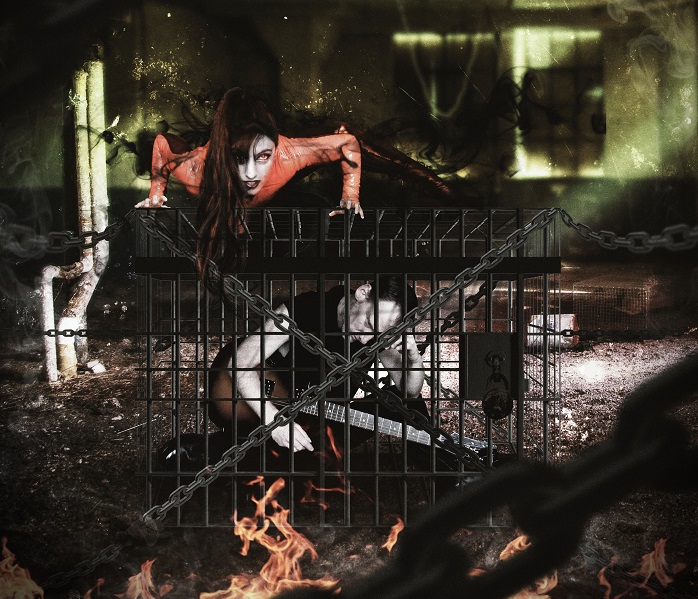 With the release of a new single, Asterous hits the mark with a dark edged alternative rock sound laced with beautifully haunting theatrical backbone and instrumentation.

"Mercenary" is a powerful and cinematic rock song that boasts a lush soundscape with piano, guitars, and vocals that swim around you as you get more engulfed with the song.

This release is incredibly vibrant and alive. You can almost visualize everything about it from start to finish and it does feel like you just watched a scene of a film or even a play.

Backing vocals float through the songs ether and piano pushes the emotional drive the song showcases as the guitar work feels things in a rock tonality.

The song has a massive and vast feel to it that has the ability to wash you away with its presence and the whole thing grabs your attention not only with its songwriting but also by its production.

There is a wonderful gloom that lurks beneath the surface but you can still feel a light at the end of the tunnel.

It's easy to fall in love with this song if you're a fan of any edgey alt-rock and it really features some outstanding performances that all the players put their all into.

You can clearly hear the love this band has for their craft.

"Mercenary" has a huge palette and lets every part of itself shine in its own right.

The single comes with another one released today called "Apprentice" and the songs become a concept record together.

With such a killer set of songs released, we wanted to have a talk with the band to find out where this all came from and where it may be headed.

TSWS: Okay so let's start with "Mercenary". This track has a dreamy aspect to it
and an edgy undertone with haunting vocals. Love this feel! Where did this
song come from?

Asterous: Thank you very much for the kind words!

In general, I find it difficult to say exactly where the ideas for songs come from.
Sometimes the beat of footsteps against a dirt floor in a quiet BC forest, or the
rhythmic swashing of the waters of the Pacific Ocean against rocky shores will
inspire a certain melody. Other times it is the random tinkering around on a piano
that will lead to the humming of a particular tune. Oftentimes though, I feel the
urge to write music when I have an excess amount of energy that begs to be
released.

‘Mercenary’ began as a piano song, and then it was turned into an extremely
heavy and fast tempo metal-esque song, however, it never felt quite right. The
track was initially missing a softer/deceptive element which was needed to offset
the cruelty of the song. We decided to strip it down to it’s bare bones and rebuilt
it as a creepier and moodier song to truly encapsulate its sinister nature.

TSWS: How does this one connect with "Apprentice" which it seems you also
released today as well?

Asterous: Mercenary & Apprentice are diametrically opposing songs - from their meanings
all the way down to the very way they were actually composed.

For example, Mercenary was carefully crafted and thought out similar to the way
a captor might take a hostage. We spent time with our producer, Braeden
Rangno of Vibe Cave Studios in Vancouver and he helped us arrange things
properly. The song was recorded methodically and masterfully.

Conversely, Apprentice encapsulates the other side of a messed up relationship.
The song is imperfectly honest and desperate in its tone. Apprentice was
recorded at home; many tracks are one takes or recorded off the floor - the main
piano was improvised on the spot and the lead vocal track was done in one take;

the atmospheric guitar and bass were also improvised and done in one take as
well. The mixing and mastering was completed by Dominik of Protonaut Studios.

In terms of meanings, Mercenary is about complete domination whereas
Apprentice is about submission and helplessness.

A listener could take the songs as belonging to two very different characters.

TSWS: For sure some great alt-pop styles and influences on this track! Who are
your actual biggest musical influences?

Asterous: This is always such a difficult question since our musical tastes are so wildly
different and all over the map.

Rummy (that’s me) loves Rammstein, Pink Floyd and the fictional melodic death
metal band, Dethklok. However, I also love a lot of the oldies/hippie music from
the 60’s, or dance/disco tunes from the 70’s.

Ultimately, it’s hard not to be touched or influenced in some way by any and all
music.

Asterous: We started as a cover duo playing weekly for a largely octogenarian population in
our hometown of White Rock, BC. Then we moved up to playing covers at
casinos. While this was a lucrative side gig, regurgitating other people’s
masterpieces became crushing to our own souls and we both agreed that we had
the desire to nurture our own creativity, and thus Asterous was born.
We began writing songs mid-2020 during the pandemic.

We will be continuing to write, record and release music, and performing live is
the goal.

This single feels massive, like there was certainly a lot put into it. What
kind of advice would you have for other up and coming artists out there??

Wow, I think both of us feel wholly unqualified to provide any advice to anybody
about anything....ever.

BUT the biggest thing we could suggest is to make music that you believe in, not
what you think should be made based on current trends. Make music that you
connect with. Lots of people won’t understand or probably even like it, and this
industry requires you to have a very thick skin which really sucks sometimes.
Just persist regardless.

Oh! And also always keep a notebook or some sort of recorder handy...I can’t tell
you how many times I have had an idea pop into my head, but then can’t recall it
later.

Asterous: Not sure really. Personally I find that songwriting is mainly an urge or compulsion
based on intense emotions. Sometimes inspiration comes after seeing a picture,

or art. I have been moved to write a song based on the image on a t-shirt once.
Being open and not editing your imagination when ideas start to surface is
crucial.

Asterous: Currently, we spend so much time listening to our own demos trying to figure out
what is working and what to change or re-arrange.
However, the Sam Roberts Band is always a solid go-to. They’re a great
Canadian band.

Asterous: Hopefully soon! We would like to ensure we have a solid stage show developed
before we get out there.

Asterous: Just a sincere and heartfelt thanks from us for giving us a chance and listening to
our tunes! Feel free to follow us online and drop us a line, we would love to hear
from any fans who may be out there!