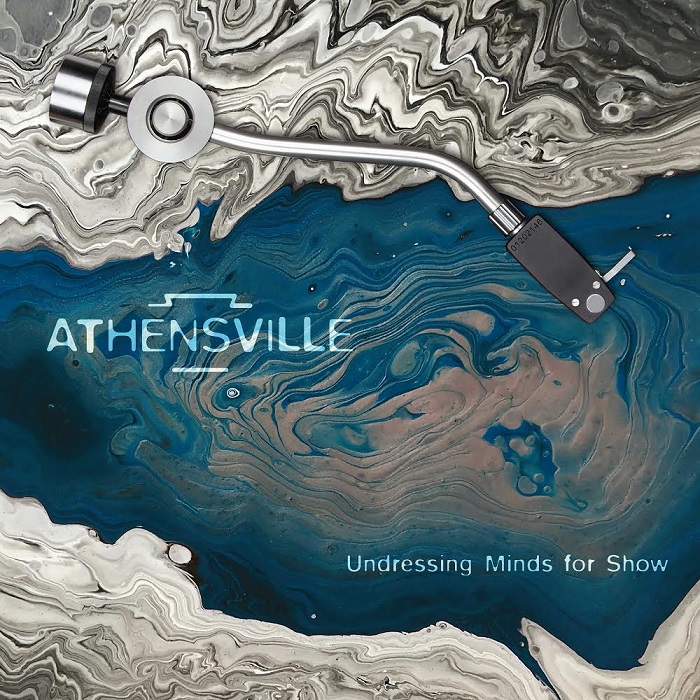 The new album release from Athensville gives off a wonderfully woven cross of 90's and classic rock with progressive undertones and a powerful sheen that comes with tons of heart.

The Undressing Minds For Show is like Radiohead, Blue October, and Our Lady Peace hung out and wrote an album together.

This record has guts and color, soul and passion, and the whole thing feels alive and breathing.

Guitars swimming in watery effects, deep grooves, and a gusto that gives off a youthful energy and a mature songwriting style.

The album provides so many hooks and heavy handed choruses its almost too much to keep up with.

This is a rock record without question and it's bright and emotionally driven variety of songs almost tell a story as if this were a concept record.

There is certainly something familiar about the album and it feels warm and drenched in melodies and anthemic aesthetics.

Athensville just might be an arena rock band as the record makes you want to see these guys live pretty badly.

The players feed off of each other's energies and this is what creates such a major drive.

With such a powerful and massiv album, we wanted to have a chat with the guys to find out where this all came from.

TSWS: Okay let's start with "Something Real". This track had a great alt rock feel with grunge and radio rock undertones. Where did this track come from?

DP: I first wrote the music and played it for Matt and some friends with whom we were jamming several years ago. Maybe even 2014. The song started off with other lyrics that were later replaced, and we recorded it for our 2018 EP, “Proper.” For the new album, it was revamped with a new chorus, new guitar lines, and a bigger rhythm section all around. It’s a song about looking back at youth, looking now at adulthood, and accepting the need to appreciate the gifts you have while fighting the tendency to keep searching for more.

MT: When I first heard Dave play the riff of that song, I thought “Ok, yeah… we should form a band.”

TSWS: I'm hearing a variety of styles on the Undressing Minds for Show album. Who are some of your biggest actual musical influences?

MT: I’d say our influences are pretty well explained by the bands we’ve chosen to cover over the years. Radiohead, Pixies, The Killers, R.E.M., The Smiths, The Cure. But there are others… While we were making this album I listened to a lot of Beach Boys to stay tuned into songwriting and recording studio magic.

MW: My musical tastes are all over the map. My parents always had jazz - both instrumental and vocal in the house, my older brother always played blues and 60s and 70s rock, and he was also a bass player.

I had my mind blown when I went to a midnight movie double feature of Rock and Roll High School and Urgh! A Music War. I walked out feeling so energized by the knowledge that there was a musical scene for ME. I’ve seen hundreds of concerts having worked at many live venues (Carnegie Hall being one of them), as well as working in the record industry for a while.  For Athensville, I focus on my power-pop knowledge base, a bit of post punk (Smiths, Joy Division), and really just listening to what the song needs me to play. I am a huge fan of 80s new wave, synth rock, and prog rock as well.

DP: Matt and I were introduced by a mutual friend who saw we had a lot of musical passion in common. Matt and I started Athensville as a guitar duo, focusing on deep cut covers, but Something Real would become our door to pursuing originals. We set out to build it into a four-piece, and James joined us on drums as we were wrapping up the EP, and Mark joined us as we were beginning the LP.

MT: Yeah, we started out playing in my living room.  Dave would show up at around 9am… we’d play unplugged until my family was all up and then we’d plug in and keep playing all day.  We’d play for about 9 hours two Sundays a month for a while… It was pretty clear that we wanted this to become something bigger.

JF: I was tired of a cover band rut I had entered, so popped onto BandMix, found Athensville, met Matt and Dave, auditioned, and just knew it was right musically, personally, politi-comedically.

MW: I play in another group that exercises my dark and doomy side, but I was longing to play a wider range of music. So I saw an ad that Athensville was looking for a bass player. I heard the EP, and it reminded me of some of my favorite acts from the alt-pop-rock world without sounding derivative, and they clearly had something to say. The funny thing is that the ad had a ? where the bass player would be, so at our first gig as a band, I showed up with a t-shirt with a huge question mark on it! The blend of personalities and musical influences has evolved Athensville’s sound to where we are today.

MT: Absolutely!  We’re starting to imagine shows this fall.  Hopefully that will be possible! There are a lot of venues that helped us get a start.  We’re excited to help them get back on their feet.

JF: Yes, absolutely yes. The live gig is the best interactive expression of our four-headed, combined effort to reach people with not only the in-the-moment created music, but also Matt’s sweat.

MW: Playing live is so great. The songwriting and recording are their own artform, but art without an audience is meaningless. We love to play live and make every show a great and uplifting experience for all. The challenge with playing the new album live will be that it has approximately 300 guitar tracks on it.

DP: I’m married with two daughters, sophomores in college and HS. My time includes a lot of work as an attorney, and as much time as possible buying and listening to records, and reading about music, guitars and effects pedals.

MT: Lately, it’s been a ton of promoting this album! But you mean day jobs…  I am a high school German teacher and coach.  I’m also involved in local politics. I’m married and we have a son who’s taking a COVID gap year from college and daughter in HS.

MW: I have a wife, 2 daughters and a new dog. My life is full! In this pandemic year I have been buying basses and equipment, working on my sound. Playing piano more, and I just started learning the drums. (trust me, James has nothing to worry about!)

TSWS: You have been releasing music since 2018! What kind of advice would you have for up and coming bands trying to be heard?

DP:  I think we would be asking that ourselves!  I’d say communication, compromise, and confidence. Always talk with one another. Be prepared to compromise. And have the confidence to share your work with anyone who will listen and many who probably won’t.

MT: Dave nailed it with the three C’s.  It’s truly like a marriage. Honesty and communication are key.  Everyone needs to be able to rely on the others.  There are a lot of moving pieces and staying on the same page is a constant challenge.

JF: Find every platform for exposure and push to get your music heard, honestly befriend everyone along the way, and be willing to make mugs of boiled water with lemon for your singer (I’ll do it from now on, maybe, Matt).

MW: We live in a world with many tools for musicians which is great, but it is a huge world! Find an Island in the ocean to plant your flag on, and grow your scene from there. Make sure any of your output is of the highest quality that you can make. And remember that there are universal themes that people will always connect with.

DP: We are working hard to get this to as many ears as we can. Lots of promotion, reaching out to radio and all platforms. And soon back to playing live and writing, keeping the momentum.

MT: Six seasons and a movie. Haha.  I’d like to open for some national touring acts. When it was just Dave and me in my living room, I used to joke that if we chose one very specific goal, no matter how high we reached that we could meet that goal. So I said our goal was to open for Band of Horses. So, let’s manifest that right now with this interview.

JF: Back in the 70s, I imagined someday opening for a band named Band of Horses, so I just want it on the record that I thought of this before Matt.

MW: We are waiting for the right time to release our cover version of Bjork’s Human Behaviour. Lots of knocking on doors for radio outlets and hopefully some live shows.

DP: More recent spins are Mondo Cozmo, Erika Wennerstrom, and the new Glasvegas release, alongside a healthy diet of everything from U2 to Rage Against the Machine, OMD to Black Rebel Motorcycle Club.

MT:  Also Glasvegas.  They are so great.  I’ve also been listening to Elbow.  Their ‘Little Fictions’ album is a masterpiece IMO.  I also have been listening to some German music to keep my language skills up: AnnenMayKantereit is a very inventive indie band out of Cologne.

MT: Ok… this never happens because I eat dinner so late… haha.  But… fun question, so I’m going to take this opportunity to make Dave feel unhealthy.   I’d have a sensible salad and a handful of almonds.

JF: Coming home from late gigs always included a stop for a Wawa meatball sub, Goldenberg's Peanut Chews, and an orange Gatorade. Otherwise it’s a bowl of Lucky Charms (with charms strategically saved until the end, like the 12-year-old I am), followed by antacid.

MW: Typically it is breakfast cereal. Or in my case, any-time cereal.

DP: Yes, we are likely to do one for the bonus track from the CD, a cover of Bjork’s “Human Behaviour”, which we will release soon as a streaming single.

MT:  You may have heard about the erupting volcano in Iceland… that may or may not have something to do with the filming of our video taking place there.

JF: I’m the video editor for the band and this is the first I’m hearing of Dave’s and Matt’s plans.

MW: We have a video of us playing a “live in the studio” version of Easy Enough, which will be released shortly on a unique platform.

DP: Thank you for supporting us … it means a lot to each of us.

MT: Thanks! And tell a friend!

JF: Thanks so much for listening. Aside from the “opening for Band of Horses” goal idea I (not Matt) came up with when I was, like, twelve, having people just listen to the music is ultimately the only thing that matters.

MW: Music is your friend. Therefore, we are your friends! So long friends!