An Interview With Barney Barnett 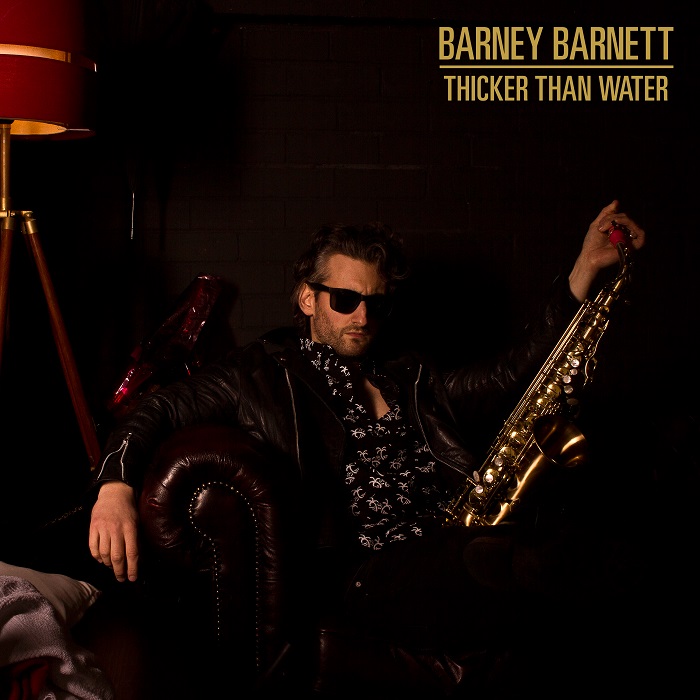 A new release from Barney Barnett is a heavy handed classic rock style track with some killer attitude and a massive and cinematic chorus that gives off an alternative edge.

"Thicker Than Water" comes with not only some great lead guitar hooks and a load of bright energy, but Barnett's staple Saxophone sections that give it all a unique approach.

This track boasts some gusto and comes alive the minute you start it but certainly doesn't let up.

Vocals belt with passion and the song hints at 90's radio rock undertone along side it's hard rock sheen.

Barnett has a love for what he does and that shows loud and clear on the single.

The more you hear it, the more you want to see this artist live. Maybe that will happen one day in the future.

Either way, the single will certainly do for now.

"Thicker Than Water" comes along side another single dubbed "No Favours" which also carries Barnett's signature sounds and attitude.

Both songs have presence, character, and pack a clean punch with plenty of color.

The tracks are meant to be cranked and you can sing along with them out loud anytime.

With such a powerful release, we wanted to have a talk with Barney Barnett to find out more about how this started and what's coming up next for the artist.

Here is exactly what happened.

TSWS: Okay so let's start off with "Thicker Than Water". This track has a massive energy and a radio rock vibe with a great alternative edge. Where did this song come from?

Barney: The riff itself came from noodling around on my acoustic guitar when I had 5 minutes between decorating in my house. Before I knew it I had this riff and had a structure down in about 10 minutes. The lyrics came afterwards and they reflect an observation I’ve made from the sidelines....I’ll leave it at that.

TSWS: I have to say I love the sax addition to the song. Is that a staple for you?

Barney: Yes, definitely. I’ve been playing the sax for almost 25 years and I wasn’t sure if I was going to feature the sax on any of my music.However one day I was listening to some Rolling Stones and a Sax kicked in and it hit me - these songs need Sax. The rest is history.

TSWS: I'm hearing some awesome styles on this track. Who are some of your actual biggest musical influences?

Barney: My biggest influence has to be Ozzy Osbourne although I’m not sure that shines through. I just love his melodies. Other big influences which I’m told you can pick out though are Foo Fighters, Oasis, Bruce Springsteen, Crowded House, Rolling Stones....and to be honest anything else I hear. I like to pull influence from all styles and genres.

Barney:  I’ve played in various bands over the years and always had a couple of songs that didn’t quite fit the band I was playing in a the time. Once the lockdown kicked in I wanted to stay productive so I decided to just write as many songs as I could. Before I knew it I had a whole bunch of new songs plus the ones I had previously written so I decided that since I could play most of the instruments myself, I should get them out there and go on my own. That way I wouldn’t need to rely on other peoples availability so much. I’ve drafted on a couple of friends to help me get them recorded but it’s mostly me. If I’m honest I’m not sure why I waited so long to break off on my own but I’m glad I finally did it.

TSWS: What's coming next for you as an artist?

Barney: I’m in the middle of recording my debut album. I finished all the drum tracks a few days ago and I have a friend of mine recording bass in the next few weeks. I’m not sure exactly when it will be out yet but I’m pretty excited about it.

I also have a little surprise coming at the end of the month so there’s something to look forward to there too.

Barney: I’m pretty big into my exercise. I workout 5 times a week - it keeps my brain sharp and the ideas flowing. Plus it stops me from piling on the pounds too I guess haha

Barney: Right this moment - The Beatles - You never giveMe your money However recently I’ve been listening to a lot of Slash and Myles Kennedy. Love his voice and I think it’s Slash’s best work if I’m honest.

TSWS: This track has a major sound! What kind of advice would you have for other up and coming artists out there?

Barney: Just get it out there and don’t be afraid to experiment. If you’re sitting In your bedroom with a couple of songs worrying about whether people will like it or not, just do it. Do it for yourself. Life is too short not to. You can’t please everyone but you will please someone.

TSWS: How do you write your songs? Is it chords first or lyrics? How does it work for you?

Barney: Always chords first. Some times I’ll Whistle something and record it on my phone so I don’t forget it. Then I’ll sing a melody without any lyrics. Lyrics are almost always last.

TSWS: With things getting better out there, will you be planning on live performance anytime soon?

Barney: When I started this it was just a recording project but now the longer this has gone on  really wanting to gig it...so if demand is there then yes. If people want to see it live then I’ll do it. I’ll need to put a band together first though so it won’t be happening this year.

Barney:  Life, experiences and Music itself. As simple as that.

Barney: Thank you for taking the time to read, like, share and listen to my music. It is appreciated more that I can express.