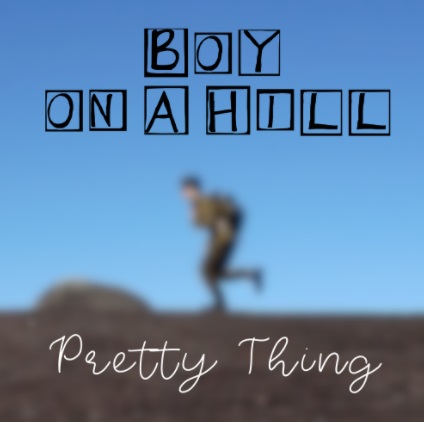 The new single from Boy On A Hill is a descriptive and cinematic folk song that brings some beautiful instrumentation together to create a song that has a roots feel but boasts plenty of pop sensibility.

"Pretty Thing" tells a story and does so by way of painting a gorgeous picture with words as sounds swell and surround you and wash you away with its presence.

The single is driven by acoustic guitars and indie-pop vocals performed with heart and the whole thing shines with vibrancy and life.

An anthemic and alluring debut from the Boy On A Hill, "Pretty Thing" makes you think, and makes you feel, and we need so much more of that when it comes to music.

You can tell this was all coming from a real place and the song was built on emotion and the love comes through heavy with every minute that goes by.

Harmonicas give hooks that taste sweet and stick with you and the song feels comfortable and warming.

With such a wonderful release, we wanted to have a sit down with Boy On A Hill to talk shop.

TSWS: Let's start with "Pretty Thing". This track has a cinematic and moving feeling to it and it comes through very full and passionate. Where did this song come from?

It's hard to say exactly where the song came from as I usually get an odd feeling when a song is about to "birth." I would describe the initial sensation as uncomfortable in my torso( sounds bizarre I know) , but I strap on the guitar , hit record on my phone and quickly try and capture the mood , chords and melody. Pretty Thing was really quick to take shape. The story is probably a cathartic howl from several broken hearts. I can't write when I'm in a dark zone, but that's the place I pull from, to hang lyrics on a melody. Tom came round to jam on it and within minutes he wrote the bulk of accordion parts. We road tested it before recording and quickly noticed that audiences stopped talking and the bar staff stopped in their tracks when we played this song as our opening number.

TSWS: I'm hearing some different styles from contemporary pop to folk and more on this track. Who are some of your biggest musical influences?

I'd would have to say my brain was programmed with Lennon and McCartney at an early age and that is always going to effect the way you create melodies and harmonies. My listening is really broad , one day I might be on some Wilco, Shins or some Canadian bands from Arts and Crafts label, the next day I might be on some classic British Punk/New Wave /Ska or just hitting an acoustic streaming playlist to hear some new talent . I'm not necessarily into  specific genres, I'm attracted to bands and singers with an original sound. Not bands with a formula pumping out the same old thing as everyone else. Tom is more a jazz background, always finding weird and wonderful stuff. But he introduced me to the Punch Bros....that was an amazing gig....he's an Elliot Smith fan and Josh Ritter too.
TSWS: How did this all start for you?

I was originally writing quite rocky material on my telecaster through a nice old JMP. The amp blew and I didn't have the cash to fix it so I pulled out the acoustic and a whole batch of songs fell out of me quite quickly. Some  were quite a bouncy feel and I had just been drumming in a band that played a few Johnny Cash songs. When you drop an up-tempo Johnny Cash song on an unsuspecting , drunken audience they jump up and down with joy.....so I thought I might try some of those feels with my pretty acoustic songs and see how that would work on an audience.I met Tom not too long after that when drumming in another band. He was in the horn section ( he is an amazing sax player) but I saw a Facebook post of him playing accordion.....we had a chat and that's when the ball started rolling.

Tom is a gig monster. I can't count on two hands how many projects he is involved with musically jazz / funk/big bands/theatre/arranging/kooky trios. He also has his photography gig , which is generally in the jazz scene. He is focused on only music and photography and its going well for him.When I'm not doing Boy On A Hill , I'm running motivational Zoom training sessions a couple of days a week helping single mums.

We have a few releases to put out this year, which means more videos to plan, and lots of marketing.In the gaps I have been working on more full band material with our drummer Dave Nolan. They will be for 2022 release.

TSWS: Do you think you'll be putting any focus on live performance in the near future?

We will definitely be looking to start gigging again. I am recovering from a spinal injury that set us back 12 months. It's hampered my ability to play guitar. When you strap on a guitar and play , it's joyful and you naturally wiggle your hips and shake your booty right? Well that actually sends me into spasms, so I'm doing stretches and working on overcoming aggravating the danger zone. Sucks!!!!

Maple Glider ....you have to listen to her.....she will touch your soul.

Humans...they are fascinating. There's so much material when you create space for yourself to stand back and observe the world around you. Obviously relationships , the push and shove of compromise , attraction and urges.

TSWS: How do you think the pandemic has affected you musically?

For me there was little effect. I began working from home with Zoom , which made my music time better as I was less tired from travel.Tom stopped his busy gig schedule for a short time.Western Australia shut down its external and internal borders really quickly so we have not really been affected much by the pandemic. There are 2.8 million people in 2.5 million square kilometers. Its a massive place and we are quite spread out. During the whole pandemic we only had face masks for 2 weeks and the death toll was only 9 people. So gigs were only stopped for a short time. We were lucky to have a proactive government who put people ahead of profit.

TSWS: You've really done an amazing job with this single. What sort of advice would you have for up and coming artists out there?

Buy your own recording gear.....don't try and be a band that exists already........find other players who understand your vision... achieve something every day....be truthful.....not everyone will like what you do...music is subjective...keep creating.

If you like our music, say hello on our social media pages or email us . Its always nice when someone tells you what a song means to them. Everyone has their own way of interpreting art. It's a beautiful thing.