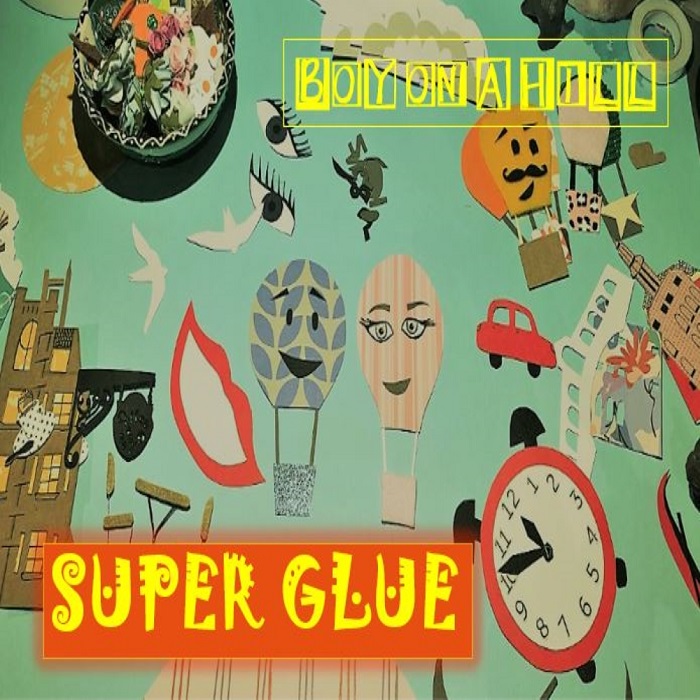 A bright new single from Boy On A Hill feels like a summer pop hit right from the get-go with refreshing pucky guitars that follow the vocal melodies and spin you off into a warm and welcoming place.

"Super Glue" is a wonderous and playful single that reaches into several pop areas and does so with a clean sensibility and uses some great textures to create something that you can float away with.

This is a love song of sorts and feels young and alive as cinematic tones fill the air and get you in a good mood.

The track boasts a touch of ambience and presents quite a large soundscape that blends in indie-pop and rock while having fun doing so.

There are little boundaries with this track and this is part of what makes it so damn good. It has that freeing feeling that Boy On A Hill presents sometimes and this is where the refreshing part comes in.

The single makes you feel like you woke up on the right side of the bed. Something wonderful to look forward to. When you have someone you want to spend time with, that's the feeling you get.

That feeling is completely bottled up and laid out in the form of a song with "Super Glue".

Quite the array of instrumentation that fuses together in a tasteful and even graceful way all while keeping that shine up front, this song has a lot to offer in the way of summer pop music and it comes just in time.

With the release of this addictive track, we had to talk with Boy On A Hill and find out some details about well... as much as we could.

TSWS: Okay guys let's start things off with "Superglue"! What is this track about to you? Why did you write it?

Dan: Super Glue actually started out as a lullaby .My youngest son Aleksei , was in his rocker and was grizzling and crying and part of the song fell out of me “ there’s no time for crying , if you’re the one not trying, I could make you happy “ I kept coming back to that every time he wasn’t sleeping and recorded it on my phone in my ideas files.. At some point I decided there was a full song in that and crafted the rest of the lyrics.The song is all about getting to know someone and the dynamics of relationships.

TSWS: The video for "Superglue" was outstanding! How did you guys create this? Did it come out how you expected?

Dan: During the pandemic a couple of local industry folk , Bob Gordon (journalist) and Donna Albertini (Manager & Publicist) put together an online music show for local bands called “the Music Reel.” I was flipping through the MR Facebook page one day when I found an animated video by a young singer/songwriter called Ornella . Her track “Golden Boy” has this beautiful animation that she created on her iPad. I was blown away and sent her a message saying, “ hello, I love your song and animation, please can you create one for Boy On A Hill ?” I sent her the song and a few weeks later the finished product arrived in my inbox. I would have to say it is way better than we expected . Amazing little touches in the storyline.

TSWS: Have you been rehearsing during the pandemic?

We have rehearsed the full band but that was more developing ideas for songs that are in production. Venues have been partially open , but we keep having mini-lockdowns and short interruptions when we get local infection escaping from quarantine hotels. We have rehearsals from this week though as we are booking gigs.

TSWS: How do you write your songs? Is it lyrics first, or chords? It's different for everyone.

Dan : 9 out of 10 times it is chords and melody first and lyrics second, though I did write one song from start to finish whilst driving up the freeway to a gig. I just shouted at Siri and dictated it into my phone.

TSWS: What other things aside from music influence you as a band? Films, life, culture, etc.

Tom : I've always found travel inspiring, even just a change of scenery can spark creativity and make for great song writing material. Old western films are a good source of memorable stories as well, and I think that tends to come across in our music.

Dan : definitely old Westerns. I have a few songs that fell straight out of all those old movies.

TSWS: What's the craziest thing that has happened to you at a show?

Tom : Can't remember much crazy stuff happening at our shows except maybe a drunken heckler at the Indi Bar trying to do stand-up comedy

TSWS: What would you say is the best thing about doing what you do?

Tom: At the risk of sounding cheesy - the audience. There's nothing like having a room full of people completely silent (bar staff included) while they listen to every note

TSWS: Give us some of the most important things you've learned as an independent band.

Dan : Music is only part of the equation. It’s the joyous, creative fun part. Once that is done and dusted ,you have to leave the toys in the playroom, put on your business suit and spent your time planning and undertaking your marketing. That part is probably going to take more time, effort and dollars than the creating music and videos.

TSWS: We understand you had a bit of an injury that halted guitar playing for you for a bit. Have you been doing better with that? Able to pick a guitar up and play yet?

Dan :For a long time, I could only manage about 15 mins playing and was beginning to think I would have to get someone else to play guitar. Then I spent some time analysing how I stand and hold the guitar and sing. I used to be quite animated when I performed before the spinal issue , now I can’t jump around and wiggle my hips so enthusiastically, but I can play a set. Like everything I do , I just have to pre-plan my movements so I don’t exacerbate the issue. There’s always a solution to a problem.

TSWS: You have been releasing singles lately and they've been amazing! Any plans for a full-length album in the near future?

Dan :The industry is in a strange place. Established artists are still using the model of album releases. They have marketing depts and big budgets. Is it necessary to do albums? I don’t know any more. Streaming and playlists are about mixing up endless compilations. Its about mood and genre. As an independent ,if you release an album, you will be promoting one product for a short period of time then you will run out of anything to promote. However, if you release the songs individually , say one every two or three months, then you constantly have material to promote to keep the interest going. You won’t disappear for a couple of years whilst you record new material.

TSWS: You wake up in the middle of the night starving. What's all of your go-to midnight snacks? (a question of character here).

TSWS: Any final words for your fans?

Thanks for listening, follow our socials for new release information and gigs. We would love to hear from you… say hello…especially whoever is streaming from Guam, Estonia and Brazil. It’s interesting to look at Spotify data and see all the places where our music was played.