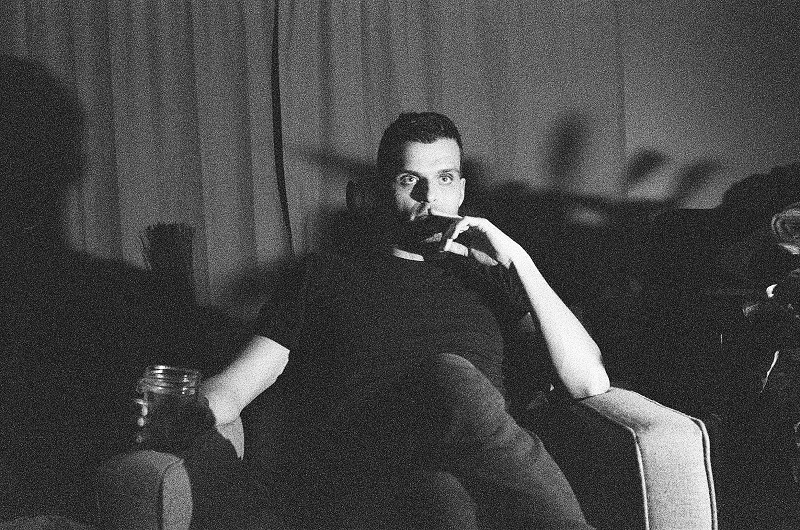 Caleb Veazey Just Dropped a Collaborative Ep That Incorporates a Wondrous and Colorful  Array of Instrumentation, Styles, and Sounds.

The Tuesday Ep Is an Ultra Creative Take on Indie Rock Infused Contemporary Pop and Showcases some Gorgeous Songwriting and Sultry Vocals That Have the Ability to Engulf You and Keep You Afloat Amidst the Song's Atmosphere.

Each Song on This 3 Track Record Has Something Different and New to Offer and Provides a Different Shade of Pop All Together.

These Are Addicting and Vibrant Tracks That Are All a Major Example of Today's Youth in Songwriting and How Creating Art Without Walls Built Around It Is at Times, the Best Kind of Art There Is.

Packed with Passionate Guitar Performances, Swelling Musical Journey's and Reflective Sound so Eclectic, the Record Even Features Rap When You Least Expect It.

Veazey Is Clearly a Seasoned  Artist That Knows No Boundaries When in His Zone and Isn't Afraid to Send a Message Ith a Song Either. This Is an Impressive Combination  and Gutsy to Say the Least.

The Tuesday Ep Is Exactly What We Need Right Now in the Musical Sense. Something That Gives Without Asking for Anything Back. Something That Bleeds the Love for the Craft.

We Wanted to Have a Chat with Caleb to Talk About Where Allof This Came from and Where It's Going.

Tsws: Okay so Let's Start with the Tuesday Ep. This Release Has Such a Wide Variety of Styles, Instrumentation, and Genres Crossing over Each Other It's Pretty Huge! Where Did This Ep Come from?

Caleb: Yeah, It's a Complete Mess, Lol, but It's Mine, and I Think It's Beautiful. I Would Describe "the Tuesday Ep" As an Exploration of the Melting Pot That Is My Music. I'm an Especially Curious Person When It Comes to Music That I Find Emotionally Moving. When I Find Something That Interests Me - Jazz, R&B, Hip-hop, Classical, Rock, or Whatever, I Live with It, and Figure out Everything I Can About Why It Makes Me Feel Good. so in That Way, I Remove Myself from Any Genre Limitations. I Just Listen, and Allow Myself to Appreciate the Sound. the Tuesday Ep Comes Directly out of That Curiosity and Love of Music.

Being a Freelance Guitarist, Songwriter and Producer in La, I End up Wearing a Lot of Musical Hats. so Whether I'm Performing Willie Nelson Covers at Harry Dean Stanton's Memorial Service, Playing Contemporary Jazz with Bennie Maupin, or Composing for Film and Tv (Das Boot), I Always Try to Bring a Focused Curiosity and Love of Sound.

Tsws: the Songs Are Featuring All Sorts of Great Musicians Adding Their Flare to Each Track. Did You Know Them Before? How Did This Happen?

Caleb: Yes I Knew Them All from Various Projects or Gigs over the Years. One of the Most Rewarding Parts of Making This Ep Was Getting Collaborators Involved. I Would Be Working on a Song and As It Started to Take Shape, It Would Pop into My Head, "You Know Who Would Be Perfect for This Track...India". That Was Really Rewarding and Validating in It's Own Way - Having This Network of People in My Phone That Are Phenomenal Musicians, and I Could Hear Them in the Music Itself. It's the Reason That I Moved to La, to Be Able to Meet and Have Access to World Class Musicians That I Also Call Friends.

Tsws: How Did This All Actually Start for You?

Caleb: Good Question, I Don't Remember Anything Before the Pandemic, Do You? with Regards to the Ep Though, I "Had a Little Help from My Friends"! My Homie Efa Etoroma Jr., Who Is a Wonderful Drummer and Producer in La, Helped Get the Ball Rolling with Encouragement and Production. I Played the Demos for Him and He Saw the Potential. in the Beginning, We Would Sit for Hours Recording, Talking About the Vision, and Working on Sounds. Collaboration Is Good for the Soul and Helps You Get out of Your Own Way- That Was the Story Here.

Tsws: the Tuesday Ep Seems like It May Have Been a Pretty Big Undertaking. Did It Come out How You Expected? Are You Happy with It?

Caleb: Yes I Am Proud of It. It's Rare That You Get to the End of a Project and You Still like It, but I Can Honestly Say That I Still Love Listening to These Songs. Maybe That's Because There Are so Many Other Musicians Featured That When I Get Tired of Listening to Myself, I Just Listen to Someone Else's Awesome Part.

This Ep Was a Labor of Love and I'm Excited That the Songs Now Exist out in the World. They Feel Connected to a Tradition of 20th Century Pop Music, but Also Push Boundaries of Their Genres. As a Composer, I Am Always Mixing the Old and the New. the Goal Is to Make It Sound Seamless and Inviting to Listeners.

Tsws: What's Next for You As an Artist?

Caleb: I Have a Ton of Projects on the Table Right Now, Hard to Say Which One Will Be Released First at This Point. My Main Focus Right Now Is Working on My Debut Singer-songwriter Record That Kinda Sounds like Bruce Springsteen's Nebraska Album Meets Kanye's 808'S and Heartbreaks. There Will Also Be a Jazz Quintet Record Coming out Which I Made with some Friends from Overseas That Sounds like Nels Cline Meets Ornette Coleman.

When We Get past the Pandemic, I Am Hoping to Rebook some of the Gigs I Had Lined up in 2020. I Was Performing Every Friday Night in Downtown La, Touring with Kenneth Whalum, Preparing for a Residency at the Black Cat Jazz Club in San Francisco, and Was Doing Occasional Gigs in Europe. Fingers Crossed These Opportunities Come Back!

Tsws: with Such a Great Range of Styles, What Artists or Bands Really Influenced You?

Caleb: For This Project, I Feel like Prince Was My Guiding Light. I Am Influenced by a Ton of Different Types of Music, but so Was Prince, so for That Reason His Music Really Helped Me Keep Perspective, and Not Be Afraid to Go to the Studio with a Blank Page with Nothing but My Curiosity to Guide. There Are Other Artists like Wayne Shorter, Bela Bartok, and Howlin Wolf That Are Also Always in My Ear When I Am Writing.

Tsws: What Sort of Non-musical Things Inspire You to Write?

Caleb: Films, Dance, Poetry, Fine Arts, Everything Really. I Moved to La to Get My Mfa from Calarts and I Spent a Lot of My Time There Collaborating with Artists of Other Mediums. My Experience Scoring Films/Animations, Collaborating with Dancers, and Interacting with Other Forms of Artmaking Greatly Influence My Songwriting on a Conceptual Level.

Tsws: What Does Someone like You Do When You're Not Working on Music?

Honestly, Music Dominates My Life. There Really Isn't Anytime My Brain Isn't Working Through a Musical Idea. but When I Need to Unwind, I Swim in the Ocean. I Have This Crazy Background with Swimming That Only a Few of My Music Friends Know About. I Was All-american Swimmer in College and Went to the Olympic Trials Twice, It Was My Other Life Before My Music Career. so When I Need to Unwind, Swimming Is My Activity of Choice. the Cold Water Really Helps Me Calm down and Cleanse the Creative Palette.

Tsws: Before We Go, What Would You like to Say to Fans?