An Interview With Chad Steele & LEO 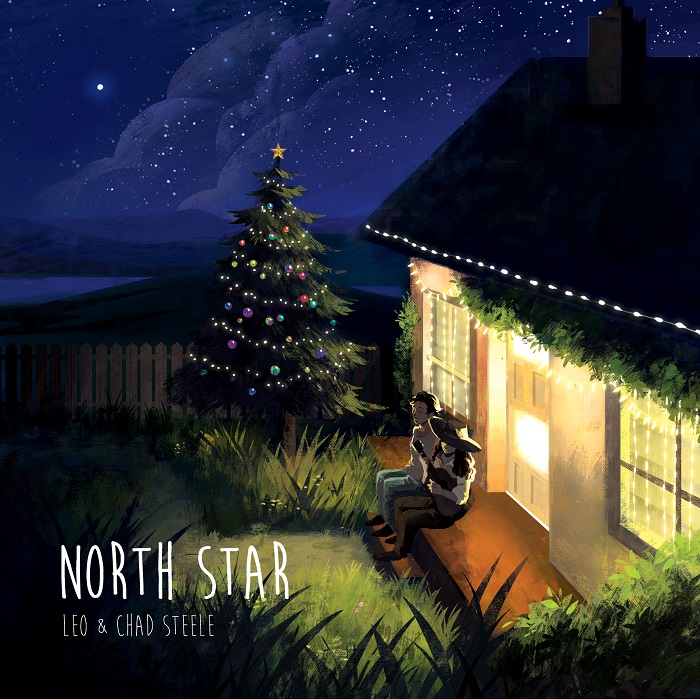 Chad Steele returns with a beautiful and cinematic new single that comes through with heartwarming tonality and a massive set of textures that let the song wrap itself around you.

"North Star" is here just in time and it all makes perfect sense as the descriptive lyrical approach paints wonderfully vivid pictures and settings and the begis to quickly bring up your holiday spirit.

This is indeed a holiday song and it's done in a full bodied, fully orchestrated singer songwriter style.

Steele is known for his compositions and songwriting along with his outstanding key playing and this time around, he's teamed up with LEO and they've really put this together as if they'd been writing songs with each other for years.

The single is packed with string sections and bells, and of course lots of perfectly performed keys that all come together with a beautiful vocal that flows in an almost dreamlike style with an alluring essence.

The track is powerful, lush with a huge soundscape and array of instrumentation, and has the ability to cause memories to start flashing in your head.

Memories of holidays, loved ones, a special someone perhaps. It's all there in this song and it all sends you off in a drift with its balanced and passionate feel.

This duo is absolutely outstanding and should be writing more songs together as their energies and creative characters mesh so well with each other it's amazing.

With such a wonderful and high spirited new release, we wanted to have a chat with Chad Steele and LEO to talk about how this all happened.

TSWS: Okay so let's start with "North Star". This track was quite descriptive and cinematic as well! Where did this track come from?

LEO: Chad brought up the idea of us collaborating on a Christmas song. I’m a bit of a grinch so I wasn’t sure I’d be the best person to work on it but one day I was going for a walk and the line “Stop fussin’ with the Christmas tree / Come over here and sit next to me” popped into my head. I sent it to Chad and he sent back a gorgeous melody line.

Chad: But then lockdowns happened here. So that was unfortunate. But we did spend a few zoom calls writing the tune. It felt very organic. LEO’s a great lyricist and I think we’re familiar enough with each other’s writing styles that it just kind of flowed really easily and came together quickly.

TSWS: So you teamed up with each other for this one. Was it an easy collaboration?

LEO: It felt quite natural to write with Chad. I think we both felt comfortable to say what we liked and what we wanted to change. It was about the song and creating something we both felt happy with.

Chad: And likewise. Yeah, it felt really easy. We were both happy to lean into each other’s ideas and strengths.

TSWS: I'm certainly hearing a few different styles on this track. Who are some of your biggest musical influences?

LEO: I grew up listening to Fleetwood Mac and Prince, thanks to my mum, and I still love them. Now I listen to a lot of americana and singer-songwriters, artists like Alison Krauss, Norah Jones, Aimee Mann and Gillian Welch.

Chad: I grew up with a lot of reggae and classic rock & pop, but as I grew older I tried to expand my musical palette a bit and now I take a lot of influence from a range of pop and J-pop artists, but I’m always trying to listen to new tunes, new ideas, and trying to make each of my songs sound a bit different as well. Lately I’ve been listening to a bit of Gretta Ray, The Midnight, Your Smith, The Japanese House, and Yorushika.

TSWS: What's next for you as artists?

Chad: I’ve got some big plans with both of my bands, The Huneez and Popasaurus, next year. But of course I’ll be working on some solo stuff next year as well. I released my album, Waking Dream, earlier in the year, so now it’s a fresh start for me. I’ll hopefully be playing a few live shows and developing that side of things, but for now it was really nice to put a bow on the year with this final release.

LEO: In lockdown, along with the collaboration with Chad, I started an americana duo called The Grandkids. I aim to get us out there playing gigs and I also want to work on a solo album to be released some time next year.

TSWS: Chad, keys are your main instrument right? When did you start playing?

Chad: I think I was around ten so it’s been...close to two decades now. But I still have a lot to learn.

TSWS: And LEO, you’re quite proficient at guitar? How long have you been playing for?

LEO: I started learning guitar when I was ten so... twenty years? Wow. I don’t have much to show for it! Songwriting has always been the thing I wanted to be best at. Let’s go with that as an excuse.

TSWS: How did recording and writing songs start for you?

LEO: As a kid I wrote poetry and kept journals so when I started playing guitar it turned into songwriting. I would record bits and pieces on old tape recorders and phones but actual studio recording and getting my own basic set up happened later when I got serious about music as my career.

Chad: After learning music it was inevitable that I’d start trying to write my own. The first songs I wrote, about ten years ago, were really clunky and I didn’t know much about how to go about it, but like anything, with practise it all started making more sense and I feel like I’ve gotten better at it. I’ve written some tunes I’m really proud of. After I joined my first band and had people to write for - that was a game changer. I felt like my songwriting increased exponentially in that time, and working with other songwriters helped a lot as well.

LEO: Feelings. All the feelings. My songwriting is definitely driven by emotion. With North Star I had to tap into that sense of warmth and calm you get when you spend time with that person who makes you feel like you’re home.

Chad: Feel like LEO’s already echoed my sentiments. It’s all about feelings. That said, it’s also cool to find an idea or a concept musically, and writing a song around that. In many ways I guess North Star was a concept first - the idea of a Christmas song. We embraced those festive tropes to create the song, but we definitely injected all those Chrismassy feelings into it.

Chad: I guess I have to give another Christmas example! It’s the start of December so White Wine in the Sun by Tim Minchin always gets a few plays by me at this time of year. I’ve been listening to his last album a bit as well, even though it’s a year old now.

Chad: Normally climbing and taekwondo, but lockdown halted that for a bit… I’m a filmmaker as well, so usually I’m working on a music video or documentary of some kind. I really upped my cooking game over lockdown as well!

LEO: … I had to think for a second there. Walking and exercising became a bigger part of my routine through lockdown, so I do that most days. Chatting with mates is important. Netflix or reading is handy when I’m done for the day and need to not think for a while.

TSWS: This track feels like a big undertaking. What kind of advice would you have for up and coming artists out there?

LEO: Have your own back. Be understanding and gentle with yourself through the process of experimenting and refining. Try not to expect perfection and don’t compare yourself to other artists.

Chad: And most importantly, practise. Practise, practise, practise. It’s like any other aspect of music, you only get better by doing it again and again. I’m not sure about Lucy, but for every song I release, there’s about 20 that I don’t.

TSWS: Do you play every day?

Chad: Yeah, most days, even if only for a little while. Although sometimes if I’m working late, or out at a show, I can’t play after coming home without waking everyone.

LEO: I do play most days, either rehearsing or writing. I’ll give myself a day off to miss it, especially if I’ve just travelled around playing a weekend of gigs and feel exhausted.

TSWS: Can we expect any music videos coming from you anytime soon?

Chad: Not for this track! We do have a sneaky lyric video coming though. I’ve directed a few music videos this year and would’ve liked to have filmed one for North Star, but unfortunately due to the Covid lockdowns and other circumstances, it wasn’t viable.

Still, look forward to the lyric video. :) Expect plenty from both of us in 2022!

TSWS: Okay so you wake up in the middle of the night starving. What's your go-to midnight snack?

Chad: Whatever’s in the fridge! I’m not fussy. If I haven’t gone to bed yet then...ice cream.

LEO: I’d probably just stay starving and wait until breakfast but if I had to pick, right now there’s leftover pizza in the fridge. Yes please.

Chad: We really can’t thank you enough for listening. We both put heart and soul into our music and to have people listen and appreciate it, that means the world.

LEO: Yeah, Chad said it. Thank you. When my music moves someone, that’s an amazing feeling. I hope you get something from North Star.

Chad: Oh, and don’t forget to add North Star to your Christmas playlists! Play it on the big day, show your friends and family...we’d love to be a part of your Christmas this year! x