An Interview With Coherency 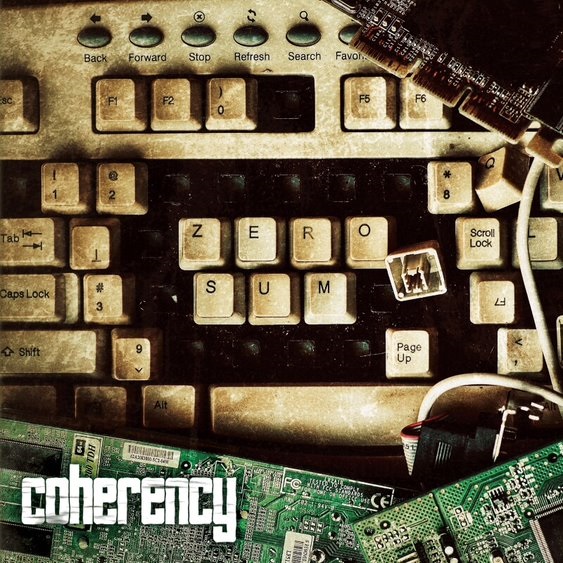 The songs on the Zero Sum album are catchy and loaded with hooky choruses that touch on 90's radio rock aesthetic and cross between pop-punk and Nick Cave while shredding lead guitars giving everything a lush mix of outstanding straight up rock.

Bands like Stone Temple Pilots and even Social Distortion come to mind throughout the records course and these guys show a major presence enough to make you want to see them live.

As you reach further into the record you get Motorhead, and Queens Of The Stone Age vibes and things turn into a desert motorcycle rock.

There's so much to soak in and so much to please fans of all sorts of rock music it's almost intimidating.

This album is alive with drive and gusto as riffs stick with you, changes surprise you, and it's hard not to love this whole set of tracks.

You can sing along aloud with songs, and you can head bang to others. It's all wrapped up in an ultra fun hard rock format that leaves you floored.

The fist single from the album is called "Automation", and it comes with an outlandishly funny and well done music video. We've got that below for your viewing pleasure of course.

With an album release that's bound to give you the warm and fuzzies, we had to have a chat with these guys to find out where it all came from. Here's what happened.

TSWS: Okay guys, let's start with "Automaton". This track has some killer riffs and a punk rock undertone to it along with a sort of classic metal feel. Where did this track come from?

Coherency: Thanks!  We like it too!  Automaton, like most of our tracks, starts after a long day of work and family commitments.  Kids in bed, time to relax and unwind, grab a guitar, grab a beer, mess around, see what happens.  Hey, that sounds pretty good, record it and send it to the guys for feedback and development.

TSWS: The video for the single was outstanding! Did you plan it out this way? Were you all happy with the end product?

Coherency: Because of our busy work and family schedules, we had to get it all done in a day.  We had the idea of making fun of other genres, our own, and ourselves, and blending that with other little jokes like using “rockband/guitar hero” toy instruments, hidden infomercial text, etc.  Each “genre” was roughly an hour of shooting, so knowing our time was limited we just had fun with it and I think that really comes across.

TSWS: I'm certainly hearing a bunch of rock styles in here. What bands really influenced you?

Coherency: A variety.  Grunge is the foundation with bands like Nirvana and Faith No More, but each member brings their own influences and preferences in, like metal, punk, and rock.

Coherency: Many years ago.  We started playing together in 2005, usually jamming our favorite tunes and then slowly added our own material.  We released an EP in 2010, then life, starting families, and having a bunch of kids got in the way.  We reformed in 2017 by a chance invitation to open for another band.  Since then we’ve been on a writing and recording tear, releasing our full-length album Cognitive Dissonance in 2018 followed by music videos, an Unplugged EP in 2020, and our upcoming full-length Zero Sum on May 7th, 2021.

Coherency: Usually nothing and everything.  When Chris gets hot and sweaty behind the drums and has to take his shirt off, that usually inspires us!

But really, there's no lack of craziness in the world right now so there's always something to write about.  When that becomes tiring, we look around inside our own heads for craziness to write about.  How does an idea pop in your head?  Where does it come from?  No one really knows, they just appear into consciousness from somewhere unconscious.  Then you mess around and another idea comes.  Based on that answer, I guess you could say the unconscious mind is a topic we explore frequently! Heavy.  Yep, we’re deep.

Coherency: Same shit we were listening to 20 years ago!  We all have our own musical palates that influence us which includes music from all decades, styles, and genres.  Brenden's listening to a lot of "The Amity Affliction" lately, Justin “The Distillers”, Chris “Tool”, and Eric “Spiritbox”.

TSWS: The song and video seems like a big undertaking. Any advice you'd give to other up and coming artists out there?

Coherency: Just do it and have fun.  We take a very punk rock DIY approach wherever possible.  We record in our own studios, make our own videos, and just have fun doing it.  It doesn’t need to cost much and the technology today is infinitely better than people had in the 60s.  We use a shitty cheap camera for videos, find good natural light, and work within our limited time and schedule constraints.  “Just do it” - Shia LaBoeuf.

Coherency: The usual.  Signing the next big record deal, rolling in piles of cash, drugs, women, you name it!

TSWS: Now that things are getting better, do you think you'll be focusing on live performances anytime soon?

Coherency: Hopefully.  Sask is in the middle of another lockdown...hopefully things improve soon.  We are excited to get out there and play our new material live for real humans who are in the same building.

Coherency: We used to.  But even before COVID, our normal schedules were pretty busy so practices were difficult to manage. Writing songs usually starts individually, at home, unwinding late at night after a long day, just playing around on a guitar.  Once COVID dies down it’ll be fun to collaborate in person again.

Coherency: We have fans?  That’s excellent!