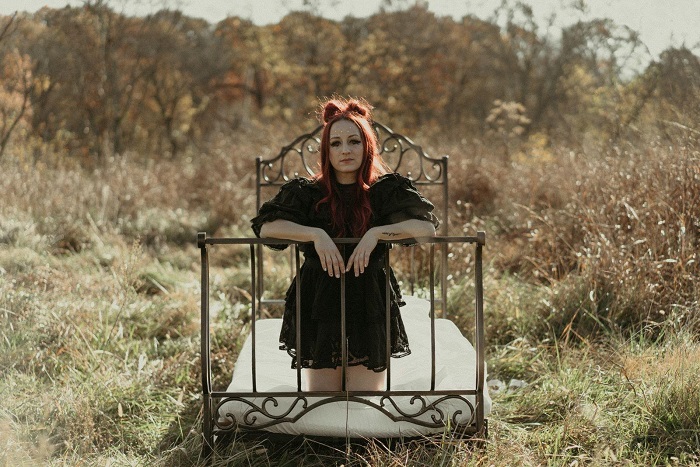 A fresh single from DaniiVory brings a fresh and bright pop feel fused with a colorful and vibrant classic dance undertone that hits with a sultry and smooth energy.

"Pink Lightning" is layered with textured pop sounds from synth pads to guitars and a dream-esque and ambient back bone that expands and breathes with haunting backing vocals and a gorgeous tonality.

The artist brings such a killer energy and swagger to this almost future pop track and it all feels like a late night at the club, lights low, dancing until the sun starts to rise.

This single has a ton to offer in the way of getting you moving, and getting you washed away into it's soundscape which quickly becomes vast and open.

A neon-lit radio dance song that is completely packed with layers and hooks, "Pink Lightning" is a showcase of a rise in youthful songwriters that bring an element of polish and shine to independent pop music.

Wonderfully cinematic feels fill the air and swirl around you as the song builds into its chorus and you find yourself caught up in the tracks style.

DaniiVory is no newcomer to dance music at all. She already has several releases under her belt and has collaborated with other incredible artists to produce some high energy danceable and fun singles.

"Pink Lightning" is certainly a step up musically and seems like the start of the artist paving her way in the pop world with a passion.

There is a beautiful power behind the song that drives it and you can feel that throughout its course.

DaniiVory is an absolute natural at pop music and her presence shows on this track.

Dive into "Pink Lighting" and turn it up.

TSWS: So let's begin with "Pink Lightning". This track has a heavy but ambient future pop feel to it. Where did this one come from? What's it about?

I was on tour at the time and a few days before I wrote this song (which was in my hotel room), I was in Houston, Texas.  I was in a parking lot on my way to visit an old friend and a streak of pink lightning flashed across the sky.  I've always loved lightning storms from when I was a child.  I remember sitting next to the back door screen during storms with the door cracked open so I could listen to the rumble of the clouds and the rush of the rain.  If the lightning was really strong, I would run up to the top floor and the farthest bedroom at the end of the hall.  There was a window in that room that had an amazing view for miles (since our house sat on a hill).  I would watch the lightning strike through the clouds.  Something about it invigorated me.  Anyways, when I saw the pink lightning in Texas, it reminded me of all the times I witnessed its power in my past and became the electric metaphor for an experience I had.

TSWS: How did you produce the song? Did you collaborate on this one?

I didn’t collaborate on the songwriting but definitely on the production.  I worked with David Asambadze on the production for this song and almost every song on my album that is coming out.  Pink Lightning went through four transformations.  The first one had a crazy upbeat bubblegum POP vibe but wasn’t the right fit.  It didn’t feel right, so we kept chugging along.  After messing with different beats for the Chorus section, David and I finally settled on what you now hear.  I played all the instruments in the song including the acoustic guitar in the second verse, bass, piano, synths, etc.  This was a really fun song to flesh out.  We did the entire thing in my home studio in my condo when I lived in the Hollywood Hills!

TSWS: There are a number of polished pop sounds on this track. Who are some of your biggest musical influences?

I always loved Janet and Michael Jackson especially the production of their music.  In addition, I would say I have a strong RnB influence from Stevie Wonder, Alicia Keys, Erykah Badu, and Prince as well as a strong Pop influence from a lot of artists (too many to name!!!).

I will be releasing another single soon and shortly thereafter my full album with hopes for a live release performance and tour dates!

TSWS: What are you doing when you're not writing or working on new songs?

I am hanging out with my two-year-old daughter and husband, teaching voice and piano lessons, working out, drinking tea and coffee, and/or watching historical drama television series!

TSWS: What artists are you listening to right now?

At the moment I’m pretty in love with Lennon Stella and Alabama Shakes.

Yes, I have a fairly busy summer schedule but plan to start performing my record in the Fall.

TSWS: You've already had some amazing shows including touring with Beyonce! What is the craziest thing that has happened to you on tour?

Meeting my husband and traveling the world with him (including Brazil, Puerto Rico, all over Europe, Australia, and the UK).  Tour romances are usually pretty hush hush and it was hard to keep it on the dl when we first started dating, but eventually, it came out from hiding and we were a full-blown item.  I met him on the Mrs. Carter World Tour!  Beyond any on or off-stage experience, being able to find true love while on tour was the most memorable and incredible experience of them all!

From the bottom of my heart, THANK YOU for giving my music a chance!  I hope you will continue to tune in as I have A LOT more music to release and A LOT more to say.  I pray you will always listen and come see me live when I come to a city near you! THANK YOU!