An Interview With Days Of Thieves 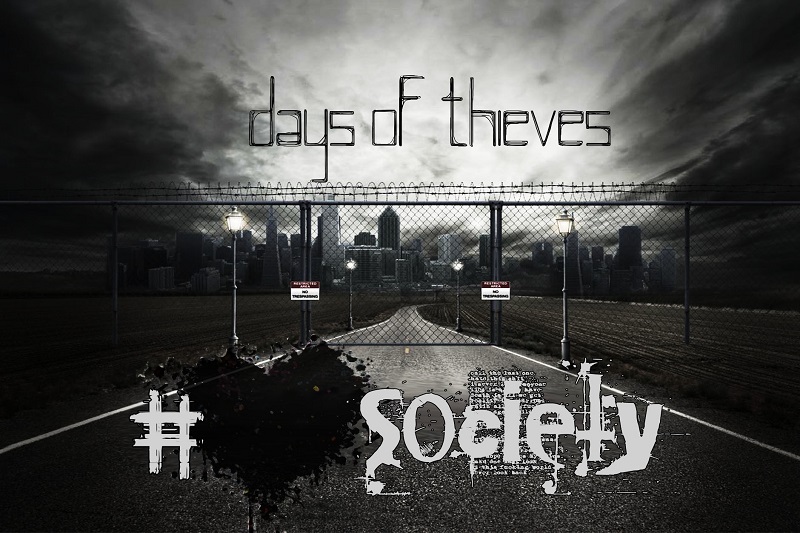 The latest EP dropped from Days Of Thieves was done so in the form of seperate singles throughout 2020 and each one with it's own firey fuzztone groove and energy along with heavy backbone and soulful vocal approach that really gives the sound an addictive sound.

Society is a two man wrecking ball and the sound of a double tracked distorted bass fills the air like a sonic wave of rock that actually warms you in a way.

These guys have a crazy fun and unique style to their music that beckons not only the sounds of other two man rock outfits like Death From Above 1979 and Royal Blood, but also alternative rock bands like Alice In Chains and Queens Of The Stone Age. This combination of rock fusion is a major part of what gives them an edge not many others have obtained.

The songs are blistering and filtered with a raw energy that becomes a staple part of the bands feel and it all has this sheen to it that just makes you want more and more.

One of the best tracks on the EP, "Sweet Salvation" is crushingly infectious and really hits with such a colorful and alive feeling that it's almost intimidating.

You find yourself banging your head, shaking your ass, and wanting to jump around the room.

The song just feels damn good to listen to.

The accompanying music video for the track is just as good as it shows the band rock out and create an atmosphere that's their own and gives an idea for their actual character which is killer.

With such a great release, we wanted to have a talk with the band to find out where it all came from and what may be next for them.

TSWS: Okay so let's start with "Sweet Salvation". This track has a cross between Death From Above 1979 and Queens Of The Stone Age with touches of earlier 90's alternative rock undertones. Where did this track come from?

It actually spawned from a different song we were jamming and bouncing around. One day I kind of slowed it down and went all staccato in the verse and, when playing with Kyle, just fell into a groove for the chorus and it just stuck. Lyrically I had this idea in my head of this lusty allure of society in most people's eyes and how in love and fixated with the idea we all seem to be. The problem is that for most of us we never get to see that dream treat us right and it just leaves us hurt and wanting more. So the salvation we reach for is something we never really know. The entire EP #heartsociety is based on that same notion.

TSWS: The video was awesome to watch! Did it come out how you expected? Were you happy with it?

I think we could have storyboarded it better so it told a better story, but the quality and idea was there given the options we had at the time in terms of shooting locations. We tried to capture both our live element and the juxtaposition of highs and lows of society. It was really important to us to have our hometown in the video so in the end I'd say we were happy with it.

How much time ya got buddy lol? It's one of thoses stories that incorporate years of bouncing around in the scene where we all know each other but things had to happen in a very sequential order to all fall in line. The universe is very strange like that. Here goes... Days of Thieves formed out of a Soundgarden Tribute act I formed after Chris Cornell died. Kyle had come to a few of the shows and it had been a hot minute since we had seen each other. We had caught up again once the tribute act fell apart and I was looking to explore more original music that Justin, the original bassist, and I had been crafting. From there, the three of us jammed and wrote about 7 or 8 songs in a very short amount of time. Justin ended up leaving the band later that year and I picked up double duty playing both guitar and bass at the same time. That really helped us craft our sound and hone in on specific tones and writing styles.

TSWS: So I'm hearing some various styles in this song. What bands really influenced you? (We know Soundgarden is one of them after watching the video haha).

So outside of Soundgarden, there's Rage Against The Machine, Tom Morello, Chris Cornell, Royal Blood, Death From Above 1979, Queens of The Stone Age, Aaron Harris (Isis), and Abe Cunningham (Deftones)

TSWS: It seems like you guys played shows a bit before. Will you be focusing on live performance again when the time comes?

Honestly right now it's a little unclear. Locally yes, but as for travelling, it's all up in the air right now. Either way, we love live performances and I can't see us not diving into it once we can

We're actually in the process of recording right now for an upcoming EP called Ethos. Outside of that we are ramping up our studio with more stage ready quality in order to play more livestream shows and connect with our fans

TSWS: "Sweet Salvation" has a little bit of a different feel than some of the previous releases from last year. Do you guys feel like you're evolving musically?

Definitely. Once our bassist left and we became a 2-piece there was a definite shift in vibe and the music took on more of a groove and pushed away from the punk rock elements that it had one our first release.

I own and operate my own Massage Therapy clinic and create music and gaming content online. Kyle teaches drum lessons from his home and also creates online content focusing on everything drums with daily posts ranging from cool toys to intricate techniques involving writing software and very cool abilities he's gathered throughout his career as a musician.

TSWS: You have been dropping songs on Spotify since 2018. What kind of advice would you have for other up and coming bands out there?

Take advantage of technology that makes your life easier and learn to not take on too much in order to stay focused on the important stuff. More and more these days the musician has to wear so many hats so never feel afraid to reach out to people that have experience in order to understand things better. We're all in this together and music runs through all of us! More than anything, always make it fun and enjoy the process of writing music and the experiences that come with it.

We'd like to say a ginormous thank you! We love interacting with you and in spite of everything going on globally, when we get the chance to play and upload content they're always there supporting us, and we feel that vibe. It's the little moments that really capture us and help us find the drive to keep moving forward. It's almost cliche at this point but stay safe out there and we'll have music slamming into your faces as soon as we can!