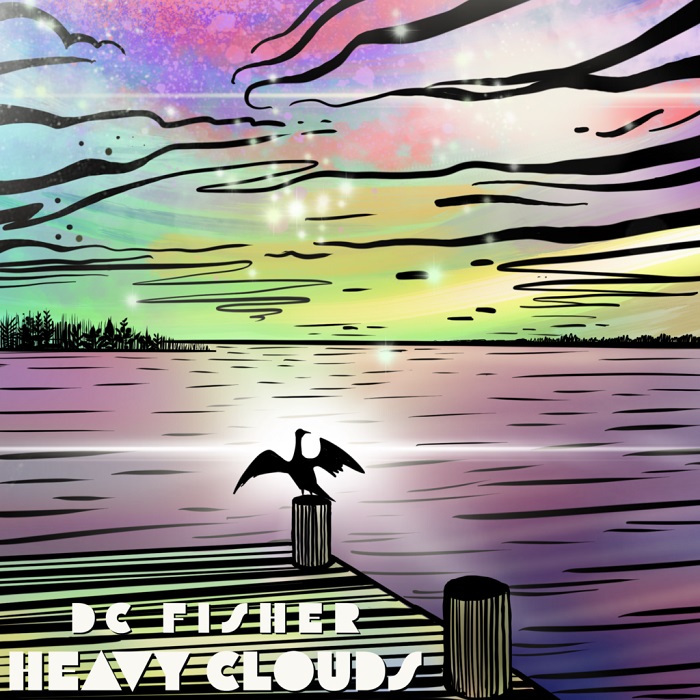 DC Fisher returns with the full length album we've been waiting for.

The Heavy Clouds album follows the single of the same title and runs the gambit of smooth jazzy and lightly surf guitar riffs and tones that wash you away with that relaxing and chill vibe.

These tracks have the deep grooves you'want and the record isn't without its psychedelic undertones and colorful songwriting.

This album feels like the soundtrack to a film. It's prgoressive in the way that it feels as though the songs connect with each other. Just like a concept album, these all flow naturally over and into the next.

This is everything we expected and more from Fisher and all we really wanted was those guitar sections, those melodies and grooves that kept us coming back for more.

It's clear the artist has pure love for the classics. For jazz music, and for funk jives.

But most of all. His love for guitar is prominent and this is an example of one of those instrumental albums that really need words to tell stories.

You'll automatically have thoughs and visuals going through your head. It's pretty amazing.

Not everything is worth the wait as they say, but this one surely was.

If you dig one song, you'll dig them all guaranteed.

You can just kick back and float along with these easily.

They are welcoming to say the least.

With this release, we wanted to have a chat with DC Fisher and find out where this all started and where it's going. Here's what happened.

TSWS: Okay so let's start with the Heavy Clouds album. This record has a very deep groove feel to it that has a jazzy undertone. Where did this record come from?

First off I just want to say thank you to The Sounds Won’t Stop for taking the time and all the great reviews that you are publishing. It's awesome to hear about new music and your writing is so full of life that it’s really fun to read!

The record started as a series of drum and bass jams with drummer Josh Nelson and myself on bass. I would bring in an idea or two and we would basically just hit record. The album is basically a series of funky jams that were created on the spot like that. Later I came up with some guitar parts that fit and elevated the jams into more of a song format. I love James Brown and bands like Kahruangbin so a lot of that funkyness just comes out when I play. My guitar style started off with jam bands like Phish with a healthy dose of Pink Floyd too. My technical chops came from studying jazz performance in college. I love to use envelope filters, wah and delays to shape my tone.

Currently my wife and I are obsessed with Steely Dan, especially the Gaucho album and Aja. We just can’t get enough of the way they mix super slick and smooth grooves with salty -grouch lyrics. So good! Some of my other favorites are classics like Wes Montgomery and Miles Davis. We are going to see Khruangbin live soon and they are definitely one of the best psychedelic funk bands out there. The artist Michael Brzozowski agreed to do the album cover for Heavy Clouds based on some photos we took near our house. The album art was done well before the album so some of the tracks were inspired by his amazing artwork too.

I think it was an early childhood fascination with concert band instruments and as a teen I would listen to tons of rock and was again fascinated with how you actually get sound out of an electric guitar. Spent many nights with headphones on just listening to music, or driving around listening to tapes. There is something awesome about the craft of playing music to learn what you are hearing and then twist it into your own vibe. Writing my own music is something that just comes through me. I feel it. Most of the time I just get an emotional sensation and play something, a lot like improvising.

I am booking my summer gigs as UKE playing lots of dates along the Jersey Shore. If anyone reading this wants to hear that side of my music check UKE & DRUM wherever you listen to music. I will play about 4 nights per week from June 1 through early September, all the dates get posted on my website too www.dcfisher.com. Along with playing live I am also going to record a series of jam band covers on ukulele! Court at JamBase gave me the idea and I’m super excited to cover some of my favorites like “First Tube” by Phish.

Heavy Clouds was really inspired by the cormorants (bird) that hang out on the river near my house, the album artwork is literally a representation of those birds. They fish at night (Underwater!) and then chill out near the shore drying their wings and sleeping. They migrate south in winter so we kind of mark the seasons by them. As far as the rest of the album it was literally going by feel. I pick up the bass and just let it happen. Adding guitar takes a little time because I almost have to learn the songs so I can find what will fit. With my ukulele work those songs have lyrics and are more about my personal journey and experiences, stuff that we can all relate to or just make you feel good.

TSWS: Can we expect any music videos from you this year?

The video for Heavy Clouds is on YouTube now. https://youtu.be/bUc-zwtLCx4 it features the cormorants and some other nature shots set to the song. There is also some surfing by my brother Paul, he’s a real soul surfer and it’s cool to see how our brain can just connect the music to all these different images. I will begin doing some live stream events on Facebook in 2022, just playing some chill ukulele tunes. Side note, the album cover was created by visual artist Michael Brzozowski, we sent him some photos from near our house and he turned them into the amazing artwork.

Yeah, it’s the only way to make money as a musician. My guitar work is a passion for me but not really something I play out. Most of my live shows are playing island vibe ukulele solo or with my trio. I LOVE playing live and hope to keep doing it as long as possible into the future. If you want to hear me live you will need to come find me on the Jersey Shore, I play a lot in the summer, mostly venues on the beach. Date at www.dcfisher.com

I have a small studio, Central Avenue Productions llc in Island Heights, New Jersey. It’s mostly where I record and rehearse although I do record other bands from time to time and give music lessons. Over the years, I spent a lot of time reading and learning the art of audio recording and have taken some college studio production courses too. Audio recording is a true artform in its own right. For my fellow recording nerds here is some of my technical stuff: Apple Mac, Logic Pro, Peavey Blues amp, Fender Telecaster, Hofner B-bass, assorted microphones, pedals by Boss and Electro Harmonix and focusrite and Presonus interfaces. All the drums and bass were tracked together live in the room, it adds some bleed which helps glue them together. I played guitar through my pedals/amp on about half the songs and direct (DI) on the rest. I like to work "in the box" so all the compression and reverbs are plugins. I try to stick to a "less is more" approach to recording, if it sounds good and feels good, it's probably good.

I’ve been in the music business for a long time making a living locally and also doing projects, like this album Heavy Clouds, that are just for my own love of music. My advice is don't listen to anyone including me! But if you do want some ideas 1. Use digital distribution and join ASCAP or BMI to ensure you get the little bit of royalties you are entitled to. 2. Don’t be afraid to self-promote and reach out to the media, like The Sounds Won’t Stop Playing, to reach more people. 3. If you have a passion for music go with it, the road is hard but the rewards are also great. Many of my favorite life moments have happened while I was playing gigs. 4. Last thing is to learn your craft, for example if you play an instrument you should definitely learn some theory and to read music. Personally I find it’s more interesting to know the rules and then go break em’. 5. Don't forget music has a mystical sort of thing too, you are ultimately connecting with other people, it's not really about you.

Thanks for listening and I hope this music brings some joy to your life. Follow me on Instagram so we can connect, @dc.music.1 I love to hear what other people are playing and also all the other cool non-music stuff people are into. Stay safe out there and I hope all of you are feeling loved!