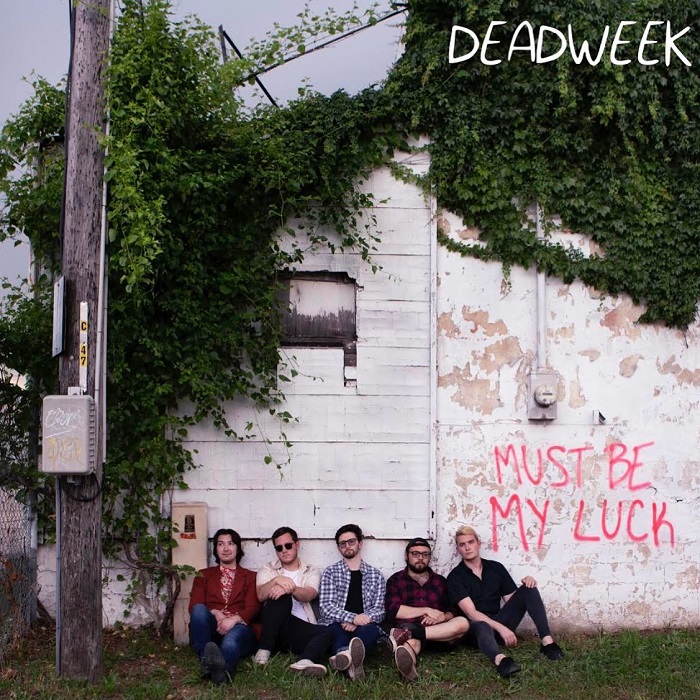 Deadweek returns with an instant classic pop rock track that feels like summer, and just in time.

"Must Be My Luck" feels like a song you heard on the radio in the late 70's as it boasts a genuine classic rock tonality blended tastefully with an indie-pop feel.

This single is beyond catchy and just plain feels good to crank up loud.

The track is packed to the brim with hooks both musically and vocally and you'll be signing that chorus by the end.

Of course what's a good summer pop rock track with a surfy inspired guitar solo that adds even more flavor to the already juicy single.

This song is beyond fun and the entire thing is incredibly infectious and sweet to taste.

The song brings to mind bands like Cheap Trick, Billy Joel, and tons more as the boys churn out this high energy, vibrant and alive feel.

This was a perfect song for a summer sunset after a great beach house party somewhere.

It brings to mind memories of your own at times even.

"Must Be My Luck" showcases the bands ability to release songs that each bring something different to the table and every time it happens it's refreshing and almost gracefully done.

All in all, we love Deadweek and this single is the anthem of the summer so check this one out and you're guaranteed to add it to a playlist or 10.

With such a killer single, we had to take a few minutes to sit down with Deadweek just to talk about this song and what's next for the band.

TSWS: Let's start with "Must Be My Luck". This track is a very radio pop rock single and it feels like summer! Where did this song come from?

We have spent a lot of time on this song and we had the feeling it could be an amazing song that gives off those summer vibes. We wrote Mist Be My Luck as an anthem for anyone who is going through struggles in life and when they listen to this track they can push those struggles to the side.

TSWS: I'm hearing some variety in your releases style wise! Who are some of your biggest influences as a band?

We all love different types of music and styles and that does show in our music. Weezer, Led Zeppelin, and Fleetwood Mac are some big inspirations for us, which you can see in our songs like Purple Light and In the Deep. Must Be My Luck pulls inspiration from all over the place and brings more energy and pop to our catalog of music.

TSWS: Will there be a video for this one?

We have a few ideas for a video, but we are waiting to hold off on that until we can solidify a good cohesive picture. We may even incorporate fans into our video.

4: Next up we are planning on releasing our first full EP. Up until then it has only been Singles and we want to get more music out to people all at once with an EP. Heres a little sneak peek at the EP too, it’s going to have 7 songs on it in total, and will incorporate many different aspects of music. It’s going to be fun!

TSWS: How did this all start for you really?

We we’re all in college and met during finals week. After spending quite some time trying to think of a fun band name, we thought, “why not take it back to how we met” and thus the name Deadweek was formed. It’s been 2 years since then and we are working harder on music and songwriting and really cracking down on become the best that we can be.

TSWS: Who are all you listening to right now.?

Currently, we’re really interested in Arctic Monkeys and Kings of Leon. Some smaller, less known artist that we really like are Donovan Funk, who just released his first song, which is amazing, as well as COIN, The Technicolors, and The Backseat Lovers.

Most of us have those boring 9-5 jobs. But when we aren’t working, we love going to other concerts and indulging ourselves in the local art scenes of Oklahoma City and Tulsa. Some of the coolest new artists are from this area and they have a lot to offer.

TSWS: You guys have had success with your previous singles already! Any advice you'd give to other up and coming bands out there?

Work on your craft as much as you can and perfect it. Anyone can become a musician these days and you’ve got to work really hard to create good music that people will enjoy. Don’t let the struggles bring you down though, use those things to make your self better and who knows, you might be able to come up with a great new song based off of those experiences.

TSWS: Now that things are slowly getting better, will you be planning any live performances soon?

We actually have a lot lined up this summer! In addition to a release party for Must Be My Luck that will be held at the Edmond Railyard, a popular local venue with lots of foot traffic, we will also be performing at The Blue Note Lounge in OKC and doing a Live Stream event with Circle Lotus Media, a media company in Oklahoma that invests in musicians and gets their music out there. Next on our agenda, we plan to book a small tour so we can get to fans that may not be able to make it to Oklahoma to see us play.

10: thank you guys so much for all your support. We appreciate how much you inspire us to keep writing music and can’t wait to share our next projects with you all!