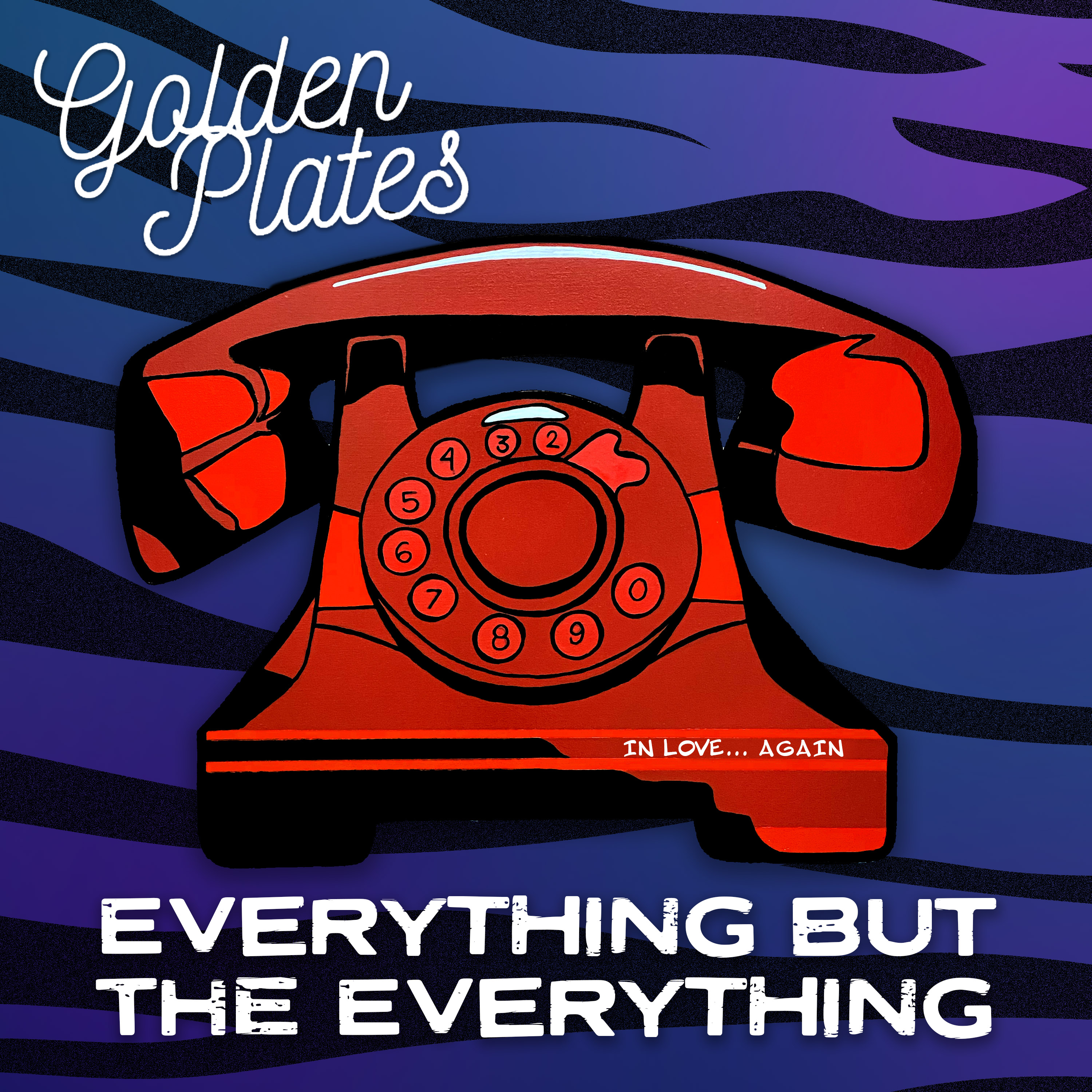 Everything But The Everything is back in action with a fresh single that touches on that 90's dark alternative pop feel almost to the likes of Interpol but with all kinds of retro undertones flowing through it's atmosphere.

"In Love...Again" is a deepening and vast track filled with the smoke and lights of mystery and swagger in the form of a heavy handed dance rock song that just bleeds artists like Nick Cave.

It's that touch of gloom that shows face just enough to take affect. It's a rock song and it's got that 4 on the floor feel and that lurky approach to it and it makes the song incredibly alluring.

This track is like a vampire. If there was such a thing as vampire rock, "In Love...Again" is exactly it.

It's the mood it sets.

Vocals are shadowy but passionate and light hearted at the same time. The song has a great rhythm and loads of pop sensibility but also a killer edge that really works.

This also of course, may be due to a collaboration with Golden Plates.

This release brings Everything But The Everything and Golden Plates together and this is a huge part of why this track has that essence.

Both bands are familiar to us as we've reviewed songs by both of them and this is certainly an outstanding musical match.

You never know what may come of a collaboration and we didn't know what to expect but upon hearing the track you kind of go "yeah this makes total sense".

This track is addicting and hits just the right energy the whole way though.

With such a great release, we wanted to talk to Everything But The Everything to find out how this one came to be.

TSWS: Hey again and thanks for doing this interview with us! I wanted to start off of course, with "In Love...Again". This one has a darker feel and gives off that alternative feel. How did this song come about?

Just like the other songs we follow the bass line to places unknown. It's like jumping into a cab and telling the driver, "Take me somewhere fun." Golden Plates picked up on the dark vibe with his lyrics. His vocal approach was a great complement to enhance the track. He finds the perfect windows, sits in the perfect pockets, to fit his vocals in the dense soundscape.

TSWS: So, you teamed up with Golden Plates for this song? Was this an easy collaboration?

It was an easy collaboration. Elder is pretty busy pushing his Golden Plates project and I work a little slow, so it felt natural the way everything came together. We communicated on timing and when recording deadlines came up, they were taken care of. Things just fell into place.

TSWS: We're familiar with Golden Plates as well and it feels like this single was a perfect collaboration honestly. So, who's doing what on this song?

I actually misjudged the song pairing and offered a swap for what became "In Love... Again."  After checking out his music and based on his Instagram posts, I thought he fell more on the bright, strummy side of rock n roll but he actually fell on the darker, driving side. I think it was his EP, "The Light" that made me see my miscalculation and I offered a swap for something that was clearly dark.
The music consists of musician contributors, drummer Landon Cisneros (Spirit Mother) and Moog specialist Andrew Gomez (NRVS LVRS). Jimmy Chen added guitar the same day he worked on Blue Sun (featuring Oliva Barchard) and I took care of guitar/bass guitar/organ. Elder actually surprised me with a guitar lead as I was only expecting vocals. His guitar lead over the track gives the song continued momentum. It's like when you put on a pair of running shoes, you're leaning forward a little bit, in the "go" position. I feel that his guitar does that, it puts the song in the "go" position.

TSWS: Might there be more collabs with Golden Plates in the future?

I hope so. I have a mantra or ethos if you will and that is that once we do a song together, we should do another one. The only way to render this imaginary contract null and void, is for you to tell me you want me to stop sending you music. And maybe block me on Instagram.

TSWS: Everything But The Everything is known for collaborating and creating sound combinations and genre smashing. Was this always the plan?

I don't think I had a plan. I just wanted to record and see what transpires. I was telling someone recently how when I started the project, I had aspirations to sound like Cut Copy or Roosevelt but in the end, I make music that sounds like nostalgic 80's and 90's alternative. I also didn't anticipate the band evolving into a collaborative to the extent that it has. Now I find myself looking for possible musician collaborations as much as I do from vocalists.

TSWS: Might we see a video for any songs coming up?

As a matter of fact, Elder is spearhing that project. He's pretty savvy with video production. I've asked him about what programs he uses and how I can get started on my quest to be as proficient as him. I have ways to go...

TSWS: What else is on its way from you?

I have two songs recorded with singer/songwriter Adam Brookes (Dangermaker). Adam will be taking us into new territory. He's a singing multi-instrumentalist producer who's been putting out music for a while. I get to sit back and learn from someone new. The third song getting close to completion is with electro pop artist Sophia Prise. Sophia and I have recorded two songs together (The Story, Just) and I'm always looking to get her back in the studio. She's an amazing artist, I've always thought so, which is why I would constantly reach out to her for bookings when I was a promoter.

TSWS: Who wrote the lyrics for this track?

Elder Brycen aka Golden Plates  handled all things associated with the vocals and their melodies.

TSWS: How does it actually work with this. Do you finish certain parts of a song and send it over and then Golden Plates does their thing?

I would say it varies from song to song as to what inspires each vocalist. My belief is that it would be more inspiring to receive a song that is 99% complete but my producer Rex Shelverton says the magic comes from building the song together in steps. I'm sure there's times we, you , me... anybody, will see/hear something and know exactly what we want to do and then, there's times it will be a process. I think on this particular collaboration, the more completed song helped Elder see what I saw earlier as opposed to later in our getting to know each other.

TSWS: Will you be doing any live shows?

I'm working on that plan now. I have a soft target date of March/April to coincide with the next release but we'll see how things play out.

TSWS: What bands are you playing in your headphones now?

I listen to the same music over and over. It's hard for something new to break into my daily dose of music. The last songs that broke in are "Rebel Rebel" by David Bowie,  and "Cold Heart" by Dua Lipa/ Elton John. Aside from that it's still a heavy dose of Amor Amor, Vacances, Melotika and the remix singles sprinkled out by NRVS LVRS.

The artwork is always awesome for your releases. Do you have a certain person you use for the artwork each time?I have three artists I unofficially rotate between. A huge thank you to Akeem Raheem, Elaine Leon and Ami Campbell. As the songs begin to take shape, I look to their latest creations to see if there's a match. I feel like I can identify a match in a matter of  seconds but I'm definitely assisted by the fact that they produce great artwork at such an astonishing pace.

TSWS: What would you say fans can expect from this track?

I would say expect a no holds barred, unapologetic recording. It's what we do, it's who we are.