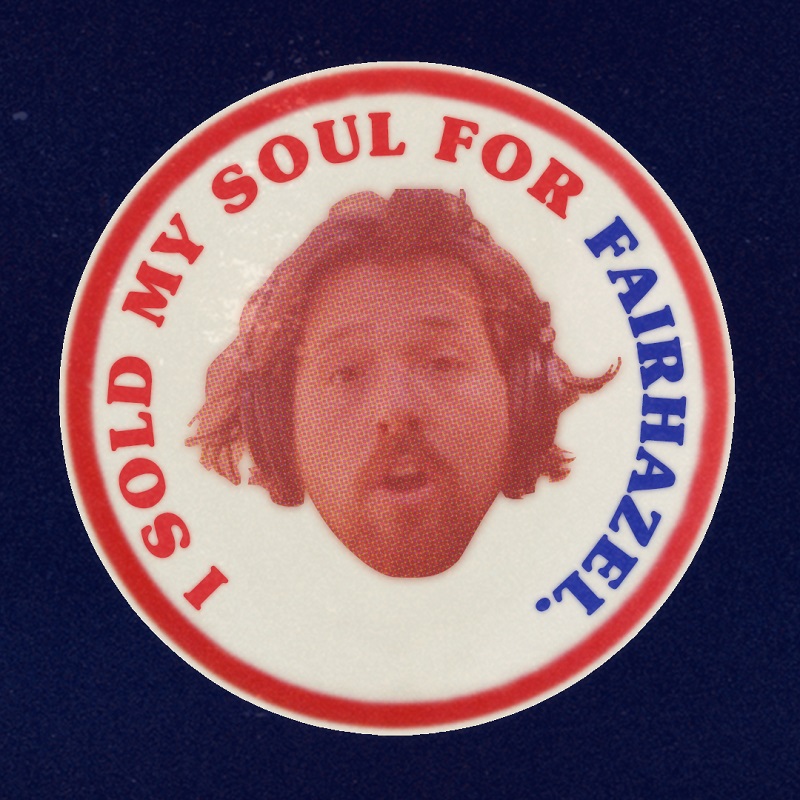 Fairhazel just gave us a full length album and it's a wonderful display of classic rock influenced singer songwriter  tracks with a massive set of colors portrayed through sound and it really is a huge musical journey to be had by all.

I Sold My Soul For Fairhazel is a breathtaking album that really feels good to listen to and will certainly whisk you away to another place all together. Where is that place? It's Fairhazel's world and its vibrant, driven, honest, and a passionate showcase of mature songwriting with youthful energy.

The record is like taking some of the better parts of Elliot Smith, sprinkling on some Beach Boys, and throwing in some Shannon Hoon (Blind Melon) all while bringing everything into a current platform and making things all his own.

One of the best things about this record is that each song actually has a life of it's own although at times the album as a whole feels like a concept record.

Released even on Spotify as a 2-disc set, ther songs are broken up and each tell a story that at times seem fictional but others you think to yourself "maybe this is all coming from real life experience".

Either way it's all this amazingly performed material from acoustic guitar to vocals with massive harmony sections and addictive songwriting.

The album is quite a lot to soak in but is worth every damn second literally and this is something for fans of all sorts of music.

With such an opus of a release, we wanted to have a talk with Fairhazel to find out where this all came from and more. Here's what happened.

TSWS: Okay so let's start with the I Sold My Soul for Fairhazel album. This record came through with a very colorful indie folk vibe and laced with pop throughout its course. Where did this come from?

Fairhazel: When I first started making music, it was very acoustic singer songwriter-y, which was the music I grew up loving and that has been the root of all my songs, just an acoustic guitar and vocals. That’s where the indie folk comes from and then I was listening to a lot of what they called pop in the 70s in the UK, Kinks, Beatles and those characters, and even though it isn’t pop by today’s standards, it has the same core elements, hooks that you can jump on easily, explosive choruses, harmonies galore, so I try to bring that to my songs too.

TSWS: I love the two sides aspect on Spotify. Was this the idea from the start?

Fairhazel: It wasn’t! I ended up with so many songs that I wanted to be on the album that I asked if it could separated like that, and I’m so glad it came out like that because it looks awesome.

TSWS: This almost feels like it could be a concept album. Is this correct?

Fairhazel: If it is, it wasn’t intentional! These were songs I had written in the last few weeks of leaving London through to the first year living in LA, so I guess in a way the concept could be about moving and experiencing new things.

Fairhazel: Mrs Hoffmeyer’s piano classes when I was a wee boy, the White Stripes and Rock en Seine festival in Paris. I used to go that festival every year, first with my parents, then some friends and watch people perform and I knew it was what I wanted to do.

TSWS: There are some awesome sounds and styles on this album. What are some of your actual influences band wise?

Fairhazel: The Kinks for sure. Laura Marling and Julia Jacklin both have awesome phrasing and melodies. Harry Nilsson is the greatest of all time. I also listened to a lot of Rotary Connection, Love and Michael Kiwanuka. If you blended all those sounds in a NutriBullet, maybe something like I Sold My Soul for Fairhazel would come out!

Fairhazel: I love other people’s stories most of all. I’m a little bored of myself and my own stories so I seek out other people to write about, even if they end up being phrased in the first person, they are usually not my own. The other thing that inspires me is interesting ways of phrasing sentences and expressing ideas, I love quirky lyrics and I love finding ways to say things that haven’t been said before, or using vivid imagery almost as if describing a photograph. I bought a lot of photo books on eBay this past year and was writing stories from photos I would see.

Fairhazel: Editing podcasts! That’s my work at the moment. I work for a few podcasts, but I love consuming art in any form, masterful tv shows and films, and photos and other songs. I love absorbing that stuff. I’m also writing a script, not necessarily with any serious plans in mind but just as an outlet for some ideas.

TSWS: This album especially seems like a huge accomplishment. What advice would you have for up and coming artists out there trying to be heard?

Fairhazel: Not to fall prey to thinking you have to make a certain type of music or do it in a certain way and just doing what feels right and what feels good to you. Jumping on something that’s trendy may bring some short term gains, but four months down the line when it’s no longer what the masses want, you’ll out of a sound, and need to reinvent.

Fairhazel: More music! I want to make more videos and in an ideal world, I could develop this script to a point that it could get made, however low budget it may be. The idea is all about music and I am writing the music to go along with it. I’d love that to come true.

Fairhazel: ANYTHING, and I mean ANYTHING that involves chocolate. I’m a chocoholic.

Fairhazel: Thank you! I love you.