An Interview With Feralman 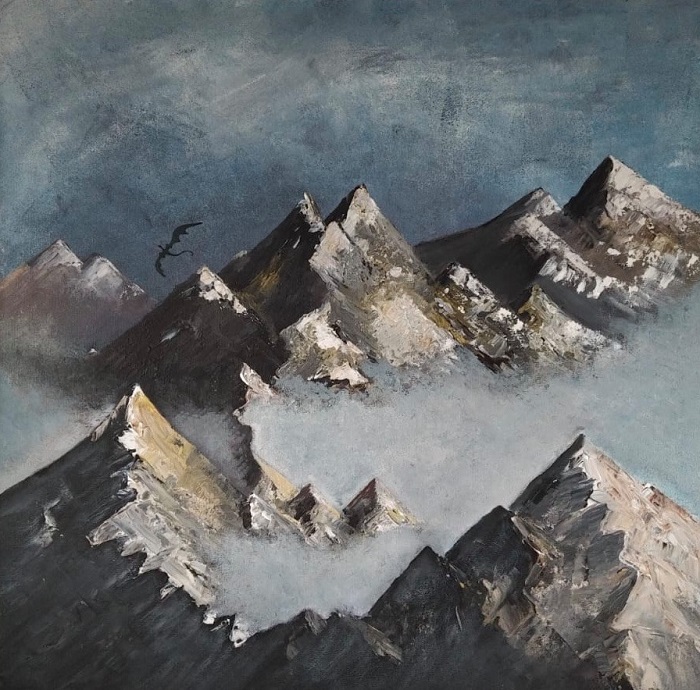 Feralman released a massive album that brings an array of textures and genres together to create something with it's own atmospheres. stories, and soundscapes.

The Chapters 34-43 album is laced with gorgeous guitar work that builds ambient tones and songs swell with cinematic colors as vocals tell tales in a dream-like aesthetic.

This record is loaded with swirling sounds and songs you swim through with emotional sways and anthemic choruses that give off touches of Pink Floyd and are rich with wavy effects and layered melodies and notes throughout its 10 song course.

A beautifully built set of acoustic and electric guitar fusions, light percussion and even a rock undertone keeps things progressive and full.

Synth pads and almost orchestral tracks creep in and take you on musical journeys through different places and can put you in a trance at times.

The record is built like a concept album and songs keep you afloat at all times.

This is an excellent record for a long drive and can have you flashing memories in your head.

There are both cold and warm feels and vibes behind the songs and it is quite a wonderful experience.

And that's exactly what listening to this album is. An experience. Best done on your own with headphones and some time to soak it all in.

With such a massive album release, we wanted to find out more and so we did just that.

TSWS: Okay so let's start with the Chapters 35-43 album. This record has a great array or singer songwriter styles mixed in with indie-pop and all with subtle tones and feels. Where did this record come from?

Ferlman: The short answer is ‘deep inside myself’.

The long answer is “Chapters 35-43” is an autobiographical, literal album. There were some fairly heavy life events that happened to me between the ages of 35 and 43, many of which I documented in some form or another e.g. songs, lyrics, poems, stories, paintings etc. All of the songs basically tell of these different events.

TSWS: You released a few singles leading up to this album and it's all come through with such life and different styles. Who are some of your biggest musical influences?

Ferlman: I like a lot of music. I really love Neil Young and Paul Simon as song writers. I love Xavier Rudd’s meaning and positivity, Mark Knopfler’s guitar playing and Sigur Ros’s soundscapes. I love Willie Nelson and Kenny Rogers and I also love a lot of 90’s shoegaze indie.

Ferlman: When our youngest daughter was born in January 2020, I started playing some simple songs and lullabies to her to help her sleep. I guess my subconscious mind took over a bit and a lot of the stuff I’d been documenting forced its way into the songs. Before I really thought about it, I had a collection of fairly well-formed tracks.

Ferlman: I paint, write books, cook, read, surf. This sounds quite luxurious, in reality as a family of 5 with 3 kids…I run around after them most of the time 

Ferlman: For “Chapters” it was life events. In most cases, whether for song lyrics or not, it is a way for me to process and let my subconscious mind speak. I never think too hard…it tends to just happen.

I’ve been releasing a video for every song on “Chapters”. There are just two left “Anniversary Song” which is coming next and then finally “I Cry”. I have partnered up with a neonatal and infant loss charity called SANDS for the video for that song. Hopefully both will be released in the next couple of months. All videos are on the YouTube channel.

Then…I am absolutely desperate to get the next track out. It’ll be the first single from the second album and is called “Let it Heal You”. It takes the sort of alt-folky soundscape vibe of “Chapters” and ramps it up a bit. I’ve gone for a big almost cinematic sound for this album. I really excited about it.

TSWS: Now that things are slowly getting better, will you be putting any focus on live performances?

Ferlman: YES! I am in the process of getting a live band together and can’t wait to perform live!

TSWS: Who are listening to right now?

Ferlman: At this exact moment I’m listening to “Yes I’m Changing” by Tame Impala. The last song was “Some Sunsick Day” by Morgan Delt.

I’m really enjoying Charlie Risso’s latest album, which is great – check it out if you’ve not heard it.

TSWS: This album feels like a huge undertaking. Is there any advice you'd give to other up and coming artists out there?

Ferlman: Don’t think too hard about it, just do it and do what you want and what you like. Whether you like it is more important than anything else. Enjoy it. There are no rules.

TSWS: There are elements of this record that make it feel like a concept record of course. Is this true?

TSWS: Okay so you wake up in the middle of the night starving. What's your go-to midnight snack? (this is a question of character)

Ferlman: I have been overwhelmed at the response so far and am genuinely delighted that people enjoy listening to my music. THANK YOU! Although that doesn’t really convey enough emphasis for my gratitude.

And watch this space…there is some really really good stuff coming soon!

Oh and, buy a tee-shirt! Ha ha! I designed the logo