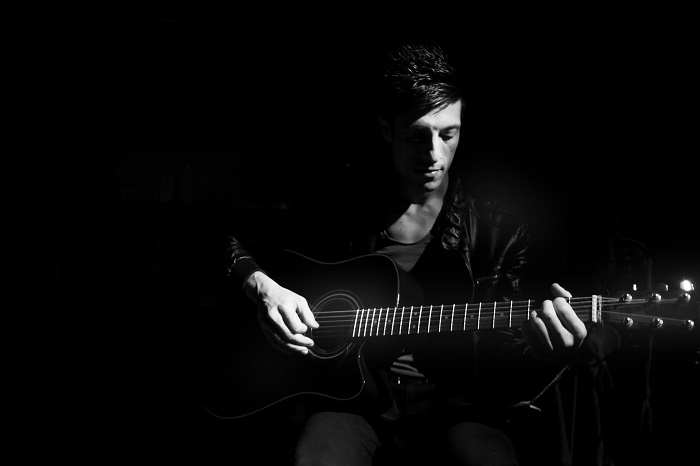 The self titled full length release is loaded to the brim with colorful organs and rhythms laced with a classic rock feel, guitars, and emotionally driven songwriting.

The songs come through incredibly lively and each packs a punch and has something a bit different to offer.

These are absolutely fun songs you can dance to all night, or take a drive and groove in your seat.

The record feels like sitting around a fire on the beach. People getting down everywhere around you, and singing along in unison.

It actually makes you want to see this artist live more than anything else. It sounds like he would be outstanding live performance wise.

Almost all the songs have massive vocal hooks and funk ingraved in the creation of them.

Upon listening through the full record, you get the feeling its more of a concept album.

Songs seem to connect well and that energy never leaves.

We had a taste of the album a short while ago with his first single "Broken Bones" and to our delight, the rest of the record sticks to that sound and does it well.

We had a chance to talk with Filippo Bones on the full album.

TSWS: Okay so let's start with the self-titled Filippo Bones album. This record has so much

colour and life! Such a great blend of genres as well. How did this record come about?

I used to be a drummer but gave that up after another disappointing band split. I took some

helped me recording at home. We made some demo songs that sounded promising and

that’s when I had the vision for the full album.

TSWS: This album has some killer sounds from reggae to rock and everything in between!

What are you performing on the record? Guitars and vocals or are there other

instruments you play on this release?

Thanks for that; apart from singing, I played rhythm guitar, ukulele, percussions, some Key

and I also did the production. This was done with a very low budget mostly recorded in my

TSWS: Do you have a full band for live performances? Will you be working on the live aspect

I will be performing as much as possible to promote the record and hopefully, if things keep

on improving with the pandemic, I will start soon. I will have a full band playing with me.

TSWS: There are aspects of this album that feel almost like a concept album. Is this true?

Not a concept album I’d say, this is more of a “rainbow” album. There is a bit of everything on

it. I’ve written these songs over the past few years and everything you hear is done

instinctively, no second thoughts. When you think too much while writing, you can get stuck

and never finish the songs.

TSWS: When recording this album, was it done in a studio? Do you have a home set up that

you use to lay tracks down?

This album was done with a very low budget, mostly recorded in my home studio in North

TSWS: This is one huge record. 10 tracks! Did it take long to put it all together?

It took a while as I took it easy, I’ve been working on this record for the past few years and

managed to finish it during the first lockdown.

TSWS: Were there songs that didn't make it to the album?

Yes, I dropped a couple of songs as I didn’t feel they would fit on this record, but maybe you’ll

hear them on the next one.

TSWS: Some of these songs do feel pretty personal. Do you think you use your music as an

I can’t deny that, I wrote Personal Hero after my father passed away.

TSWS: Is there anything you'd like to express about the creation of this record?

No really, I’d rather let the music do the talk.

TSWS: Now that it's finished and released, are you happy with the outcome? (You should be)

I’m very happy about this record and If you consider that it was done with a very little budget,

recorded mainly at home, I cannot be less than happy with the result.