An Interview With Fleeting Persuasion 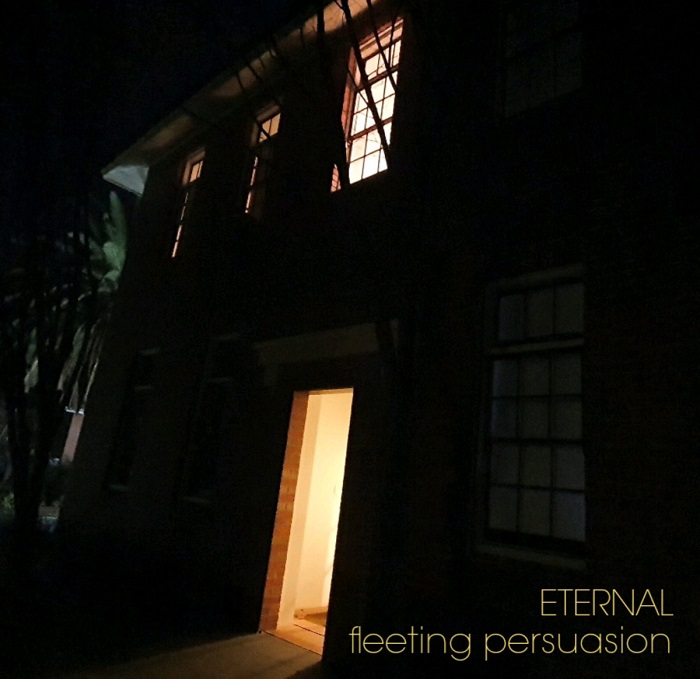 A new single from Fleeting Persuasion hits a retro-alt pop feel with classic beats and swimming guitars that fill the atmosphere and create a different world for you to step into for a few moments.

"Eternal" feels genuine and boasts a slightly dark but vibrant 90's style complete with melodic vocals hooks that stick with you and an attitude and character that shines.

The single features some silky synth pads and layers of textured sounds from different guitar tones that makes the song incredibly lush and full.

The song comes from an honest and real place and you can hear that in both the performance and lyrics alike.

THis single gives off the feeling that you've heard it somewhere before but can't quite put your finger on where or when. It's got that familiar edge to it and it leaves you with a slightly warming feeling.

This is a song about life and paths we take or outcomes that happen on their own. You can almost see them coming at times but when they happen you may not be prepared for them.

At least that's what we took from it.

It's quite a beautiful track and really showcases a young artist's presence and freedom as a pop songwriter.

This is indeed a pop song and it does indeed have that darkness to it. It's outstanding to hear that kind of freedom and in this particular style that feels almost nostalgic.

With such a great single, we wanted to have a talk with Fleeting Persuasion to find out exactly where this actually did come from.

TSWS: Okay Let's start with "Eternal". This track had a great cross between classic rock and an indie-pop undertone. Where did this track come from?

That's a pretty good summary. It came from a weird period a few months back where I hadn't written much in well over a year.My band had to hit pause on recording our unfinished album, so I kinda started writing the next one. But this time with rehearsal constraints I decided to team up with Josh Whitehead at Crosstown Studios to collaborate using drum machines and keys, to bring my little home demos to life in between lockdowns.We focused on a song at a time and really built it up and layered it.

TSWS: I'm hearing some various rock influences on this song. Who are some of your biggest musical influences really?

Various influences for sure both rock and electronic. From a young age I've always loved pop music of all kinds. Used to love clubbing so lots of house music and PNAU concerts.More recently bands like The Midnight, Chromatics, Shura, Lets Eat Grandma.Then there's the obvious likes of The Cure that I often reference.

Around about late teens I would print off tabs at school and home to learn my favourite songs on guitar.Slowly that became writing songs for my "poems" that were really just love letters...I'd record songs in the bathroom on a 4 track and release them on CDR and host lounge room gigs at home. Plus a bit of busking here and there!

Another song called Passed Through will be out soon. Very much like to finish the other album when lockdown ends plus record a few songs with my old band Old Etiquettes.Lots of studio time!

TSWS: What are you performing instrument wise on this single?

On this track I played electric guitar and some keys, plus there's a lead part I played on acoustic guitar for a change.Josh played the bass and some keys too so it was really fun bouncing off each other in real time. We didn't really have a plan so it just flowed really well.

Hope so. There was a video planned for Eternal involving my sister and some friends and we had a story line and props prepared. I'd like to still make it when we can even if it's months after the release. I did some editing of footage from a classic old film for this next single which I'm excited to share soon.

Doing my day job which is a garden business I've had for about 4 years now. Lots of amazing gardens and lovely people I'm privileged to work for.

TSWS: Are you planning on any live performances in the near future?

None whatsoever! We'll see but enjoying the studio for now and it'll be indefinitely I'd say.

Too much of the news. Musically, along side the bands I mentioned above I've been listening to lots of old 60s 70s one hit wonder type songs from the likes of Gene Pitney, Cilla Black, Al Stewart.Listen to a lot of an amazing piano artist called Sophie Hutchings as well. A little too much actually!

TSWS: You've been releasing songs since 2013! What sort of advice would you have for other up and coming artists out there?

Oh yes that first EP wow. I'm glad I stuck at it ha! That would probably be my vague advice, sometimes artists really start out strong releasing great music. But often it takes sticking at it finding what works and doesn't. Sometimes it all works!For someone who enjoys so many styles yet feels so picky at the same time I know I can get very confused with which direction to take. So try and simplify things too ;)

Movies, music, gardens, memories, dreams, more than anything probably the subconscious.
Before we go, what would you like to say to fans of the music?
We should talk music some time!