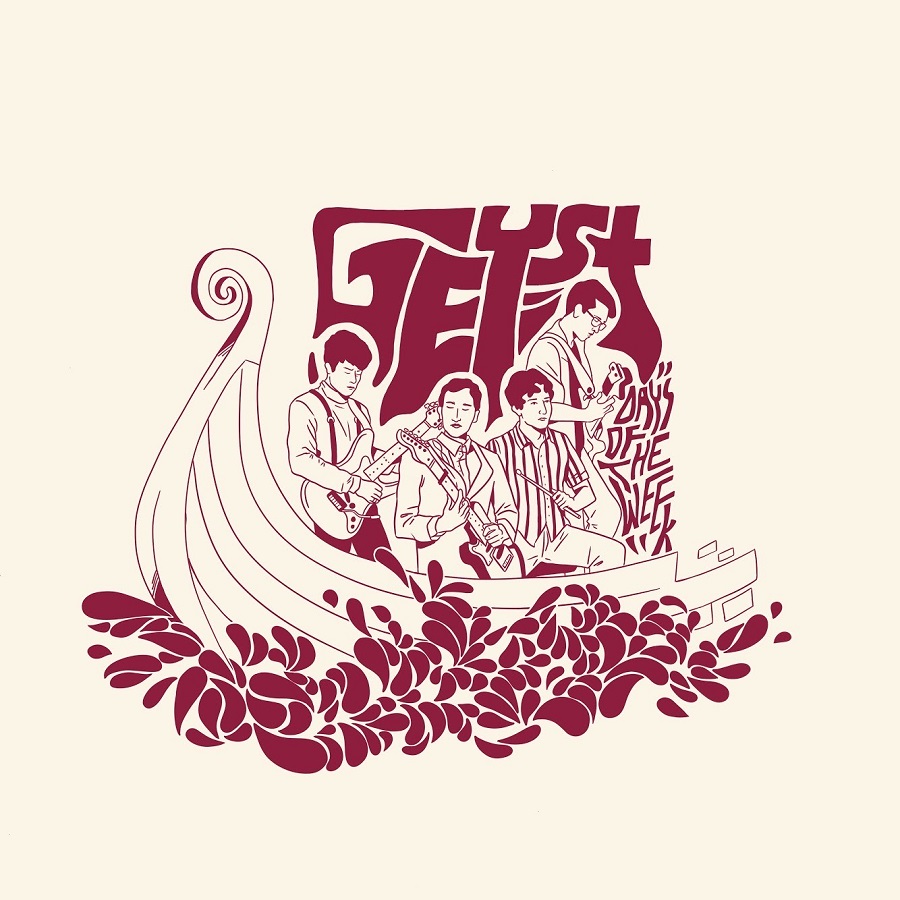 The latest EP release from Geyst is a bright and colorful indie-pop record with contemporary rock elements blended into jazzy undertones and surf guitar sections that flow while vocals have a great almost crooner feel to them.

Entitled Days Of The Week, the record boasts 5 songs that are all diverse in their own way but always hold tight to that staple sound the band acquired throughout the EP.

It's a fun release with danceable songs with punk slightly glimmering through it's cracks and loads of fuzztone guitar parts that really give the record a heavy energy and do indeed make you want to start jumping around.

The songs still always have a bit of this distant atmosphere with all sorts of backing vocals and quirky frontman parts but it all gives the band a feel that they can call their own.

Classic rock influence comes through as well as some late 90's alt rock at times and there are certainly some trippy segments that can grab you and have you start floating along with the song in seconds.

With such a killer EP, we wanted to have a talk with Geyst to see where this all comes from and what's happening next for them.

TSWS: Okay guys, let's start with the Days Of The Week EP. This record has some varying styles of indie-pop and rock along with some dream elements at times. Where did this EP come from?

This EP was basically written within the first couple months of Geyst’s creation. Some of the songs have been heavily tweaked since then, such as “Days of the Week” and “Shallow”, whereas “Lover be patient”, “Same Face”, and “Next to Me” are essentially what we had from the beginning. We have been writing profusely during 2020, so there was something special in going back and laying out the first tracks that we performed together - songs we found adequate for a band to be forged from.

TSWS: There are some great genres being combined on songs during this record. What bands or artists really influenced you?

From the beginning, our group bonded over an adoration for the shimmering but melancholic melodies of The Smiths, obscure lyricism of David Bowie, and eccentric rhythmic style of Talking Heads. Each member of Geyst has a vast interest in genres that sometimes diverge from other members, but these are common factors which inspire our combined creative process.

Joseph (Drums) and myself (Eric, Guitar) had previously played in a highschool R&B band, but graduated two years apart. We then bumped into each other on the University of Victoria campus, and got right back into jamming. At first it was pretty casual, but as soon as I heard Kelvin’s “Papertrails” demo on Facebook, I knew that we needed to get him on board and that something could come out of our collaboration. We performed three shows as a three-piece, then started looking for a fourth member. That is when Kelvin introduced James, a friend that he had been playing with in another band called Merlin. He was quick to learn our songs and performed at a roof-top gig with us at the UVic campus within a few weeks of joining. Now we are here, separated by a devilish virus, longing for each other’s sweet embrace.

TSWS: How did you record this EP? Was it a home recording?

BC’s COVID-19 regulations allowed for social bubbles of 6 people last summer, which meant that the fellas could set up shop in my bedroom. We battled against incredible adversity. Clashing work schedules, bitter downstairs tenants, and stifling heat. But we prevailed, and by prevailed I mean that the songs began to make us physically ill. We called it there. Didn’t need to spread the provincial health resources any thinner.

TSWS: Did you guys perform live before? Do you think you might be focusing on playing live when the time comes?

Yeah, we have played quite a few shows, including house shows and livestreams, and prior events organized by the UVic Live Music Community. The consistency of gigs during events like Felicita’s battle of the bands provided us with some opportunity to get comfortable with each other on stage and gain awareness from our friends.

We have a serious itch to scratch when it comes to releasing new music. BC quarantine has kept us from recording a lot of songs we developed over the course of the year. We intend on releasing a bunch of new tracks in 2021 to make up for the lack of shows this past year. We also have a concept album in the making, which we have been shaping since our inception.

Kelvin is an avid runner and horticulture enthusiast. James loves to go to the museum every day in his silk undies. His favourite candy is glossettes. Joe is studying Latin, and is a huge fan of classical history. I enjoy playing Ice Hockey, as any good Canadian should.

TSWS: Do you find time to rehearse together?

At the end of 2019 and first quarter of 2020 we were practicing three to four times a week. Usually around 4-hour sessions. During this time, we would practice our material and descend into any pools of creativity that we happened to encounter.

TSWS: What sort of non-musical things inspire you to write songs?

It’s kinda funny but the things that inspire us to write most songs are other songs. When we find one we like, we want to hear more. When there isn’t more, we take what we like about it and try to create something new. Stealing is fun.

We enjoy writing songs from the perspective that they come together to form a concept. For instance, we envision the song Papertrails to be a part of a (future) album that depicts the existential crisis of a dead cowboy.

Let us know where we should plan our next tour! Also, please wash our shirts inside-out to preserve the silkscreen. Thank you for your support!