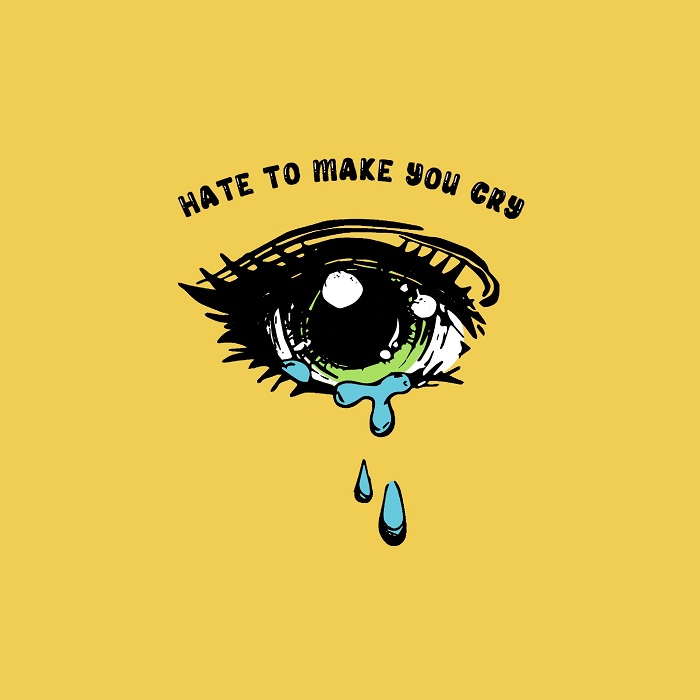 Gilliweed just dropped a pop banger that breeds an edgy undertone and a set of sultry and alluring vocals that entrance and accompany retro-synths and a refreshing and colorful soundscape.

"Hate To Make You Cry" is an ever building song that casts out the pop norms and blends in guitars with keys, and vocal harmonies that flow throughout the song's course.

Guitars give off a slight Prince feel at times and the whole track has a heavy cinematic feel to it as textures overlap and swoon.

Before long, you're waiting for that vocal hook to come back again because it was so good.

There is a clear alternative backbone that makes itself present during the song and it gives it all a tasteful but appealing sound.

This single is unique and feels warm but with a cold stare and that touch of darkness is relevant in the song and the character of what it's about.

This was a beautiful and polished track with a great blend of instrumentation and it all came together without a hitch.

With such a killer single, we wanted to have a chat with Gilliweed to find out where it came from.

TSWS: Okay let's start with "H2MYC". This track has some future pop feels and powerful vocal performances. Where did this song come from?

Cat: This track started with my music partner Saskia actually. She worked her magic in lockdown and came up with the first version of the beat with a few guitar lines on top from Joe Jackson (The Great Emu War Casualties) and a bass line from her. She sent it along to me with a few different tracks to listen to, as soon as I heard it I started humming the melody of the chorus to myself and wrote the lyrics from there!

Saskia: I actually had this music bed from a few years ago but could never figure out what to do with it... I was surprised when Cat said she’d figured out a vocal melody for it, it sounded so different and awesome! I changed the music arrangement around to suit the vocal better and made it a bit more electro-y, I made Joe put a little guitar riff on it and voila.

TSWS: There are a number of pop sounds on this track. Who are some of your biggest musical influences?

Cat: Honestly my list of inspirations is so long and spans through so many different genres it’s crazy! It also totally depends on my mood. Current pop influences for myself are, Nona, Haim, Alice Merton, Stromae, Duo Lipa, Sara Bareilles and anything Kimbra does! Inspirations today that aren’t really in our genre are Leon Bridges, Allen Stone, Georgia Van Etten and Alex Vargas.

Saskia: I also love Stromae, as well as Janelle Monae, Eurythmics, tuneyards, My Brightest Diamond, Imogen Heap, Peter Gabriel, Sinkane, Afriquoi, etc. Anyone that does anything a little bit different!

We are focusing on releasing singles here and there at the moment, building our audience up and gaining some interest there.

Cat: I write all sorts of ways, sometimes someone will say something in passing conversation I think would be a nice start to an opening lyric or see a line written in a book and build from there. Some of my favourite songs that I have written start from humming the right melody and singing along whether I have words or not at the time, some of my early voice memos of ideas are just gibberish (like most songwriters I assume) with some english words thrown in here and there. It’s the hook or some kind of memorable, catchy first melody line that gets me to continue writing.

TSWS: How do you guys write your songs? Is it lyrics first or production? It's different for everyone.

It varies for us as I believe it does for most writers. With “H2MYC”, as I said above Saskia sent me a first version of the track and we built it from there, I had a melody idea for “High and Dry” and recorded a quick garageband version to send to her. It’s a similar process for our other songs that are still in production. As this project started in lockdown with me in Melbourne and Saskia in Sydney all we could really do was send stuff back and forth to each other. This was a new process for myself as a writer anyway so I enjoyed the challenge of collaborating remotely.

Cat: Working other jobs to keep ourselves afloat is usually the first thing! When I’m not doing that I write with a theatre production company called Picked Last for Sport and we create original cabarets that we usually put on at festivals each year. I also represent Stevie Nicks’ vocals in “Second Hand News: A Tribute to Fleetwood Mac”, sing backing vocals for Saskia’s band “The Great Emu War Casualties” when they need me and sing backing vocals and play rhythm guitar in “Sean Sully and the Sleep ins”.

Saskia: As Cat mentioned I also have an indie rock band called The Great Emu War Casualties... otherwise playing bass in a whole bunch of other bands!

Cat: Leon Bridges and Allen Stone this week for me. Also as I’m in the tribute band I’m listening to Fleetwood Mac (They are my favourite band anyway).

Not right now but it’s definitely something we would love to do in the future and will work towards, especially when we are back to a point where we can gig without stressing too much about covid restrictions.

I’d like to thank people for taking the time to listen to some new music let alone our new releases. We really hope they are loving the sound and vibe we are giving and can’t wait to release more music soon!