An Interview With IRYS 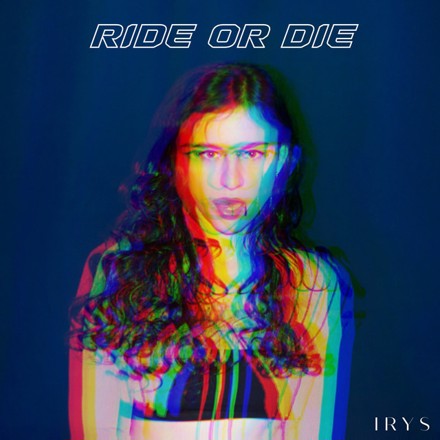 A new release from IRYS brings an alluring and sultry alternative pop song that borders on dark-wave and holds true to a gothic undertone while bringing a refreshing array of production tricks and instrumentation.

"Ride Or Die" is dark and edgy with tons of swagger and a tasteful combination of sounds from the beat to the synths used along with vocals that grab your attention and lets the track crawl under your skin in the best ways possible.

This single has tons of sex appeal and shines with a youthful energy that seems to have a certain rawness that becomes quickly addicting to say the least.

Within a minute you find yourself wanting to hear the hook again and when it comes it's completely satisfying. The whole song is satisfying actually.

There is something about it that makes you stop you in your tracks and wait so you can find out who it is you're hearing.

There is also a little nostalgic feel attached to it. There are little sections and sounds that bring you back and it's awesome to hear something that can do that while bringing in a new school tonality to it all.

What's even better is the music video that accompanies the single which really shows more of the artists presence and character and is coated with deep purples and a vapor wave aesthetic.

This was quite a killer alt-pop single and with its release, we wanted to have a chat with IRYS about where it came from.

TSWS: Okay, so let's start with "Ride or Die". This track has a killer pop edge to it. Where did this
song come from?

Thank you! I made "Ride or Die" really quick. This is so different from song to song: some songs
take forever, others are done without much effort.

I started "Ride or Die" with the beat and the guitars; I really wanted to add some guitars, as I've
gotten a bit away from my main instrument lately by mainly focussing on producing. When I
added the vocals, it only took a few takes, and then I had the right words already. I often
experience this with my lyrics: they just come from my subconscious, and I only understand
afterwards what I actually have been singing.

In "Ride or Die", I sing about a toxic relationship and its weird dynamics. An experience I made
some time ago but found it hard to talk about; it works so much better in a song!

TSWS: I'm hearing a number of different styles on this single. Who are some of your biggest musical
influences?

I definitely find it difficult to put my music into a specific genre or category. Sure, it's electronic
pop, but there are indeed so many influences! I, for example, love Gesaffelstein and never get
tired of his tracks. And recently, I got a bit obsessed with Nasser! But I also listen to artists from
other genres, like Sage The Gemini, The Underachievers, or some older Russ tunes.

TSWS: So, when did this all start for you?

Music has always been a big part of my life. Since I was a kid, I've always been involved with
something musical, be it dancing, playing guitar, or singing in a choir. And I have been writing
songs for a while but did it initially more for myself.

I only started thinking of music as a career when I moved to Berlin some years ago! I then worked
with a band and different producers on my song material. But I quickly realized, I didn't like the
idea of being dependent on others to finalize my songs and then have them sound different than I
imagined. For me, it is and always has been about the sound I have in my mind! So I learned to
produce myself, which was the right decision. I then started putting out my music in March 2021!

TSWS: What's next for you as an artist? Anything in the works even now?

Absolutely! I constantly work on new material, and my next song will drop in January '22.

Yes, I do everything myself - from writing and singing to producing, mixing, and mostly also
mastering my music.

TSWS: Do you collaborate with anyone?

I work with a friend on my visual material, first of all, my videos! Other than that, I am my own
boss. But I am open to collaborating with other producers and creating music outside of my
project if the vibe is right.

There was not much time for anything else than music this year! But when I have time off, I love
being in nature, doing yoga, or watching a good Netflix series. Pretty much everything that
balances out my hyperactive mind!

My new music video for "Ride or Die" just dropped on the 5th of December!

Due to Covid, the planning has been a bit difficult, unfortunately, but I want to play my first show
at the beginning of 2022. Let's hope that works out!

I often thought about this question. I honestly don't need much to get inspired; I'm already
constantly inspired to create music. I mean, I love watching movies, for example, but I don't need
them to get inspired. My head is already full of ideas! Maybe there comes a day when they stop,
and then I can see where I find inspiration. So, in the end, what inspires me is how my brain turns
my life experiences into songs and melodies!

I just added lots of Nasser tunes to my playlist!

TSWS: You wake up in the middle of the night starving. What's your go-to midnight snack? (a
question of character here)

Haha, I like the question! It would be gluten-free crackers for me.

TSWS: This single feels like a big undertaking. Is there any advice you have for other up and coming
artists out there?

Sure! I talked about this before: I guess the most crucial thing is to listen to your gut! It's easy to
get distracted when you start making music and seek advice. I learned the hard way that many
things people say maybe just don't fit for you.

I think it's important to understand that even if you're just starting out, your vision is valid, and
don't let anyone destroy that for you. Then, of course, it's important to have a good work ethic
and the ability to persist even if stuff doesn't work out. I learned that being consistent in music is
much more important than being intense - small steps every day are more sustainable than an
outburst of energy that then depletes you. So that's what I would say: Believe in your vision, and
then work towards it, without getting distracted by the outside noise!

I'm really thankful for everyone who has supported me on this journey so far and for people from
so many different places who message me and believe in my music! This is just the beginning, and
there is much more in the works.