An Interview With Jay Luke 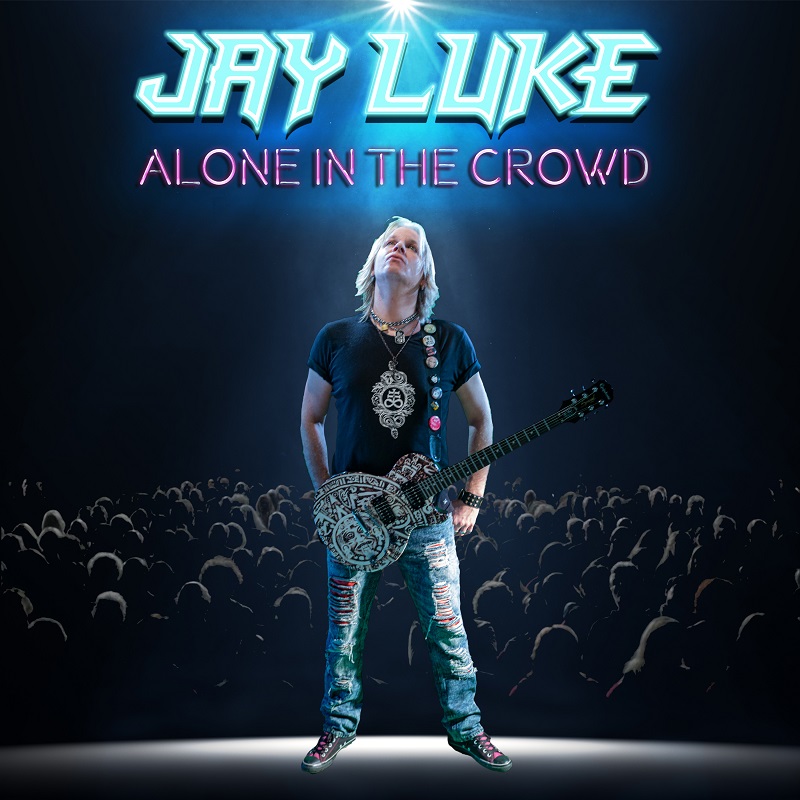 The brand new release from Jay Luke gives off a powerful hard rock style with melodic and driving guitars, passionate vocals, and a classic rock attitude.

The Alone In The Crowd album has an incredible raw energy hat seems unstoppable, a trash rock undertone with touches of pop-punk, and some tasteful and impressive lead guitars.

Most tracks will get you up and jumping around the room with bright and alive feeling songs and character.

We've got ballads with layers of guitars and an upfront and honest approach, there's a ton of heart that shines clearly above all else, and it's easy to get hooked into the sound after just a few songs.

This record is a fusion of several rock genres and an absolute love for his craft.

Inventive and engulfing, Jay Luke already has a great library of releases under his belt and it's obvious this is not the artists first go.

Luke has been working his way into the rock arena on his own terms since teh beginning and Alone In The Crowd is so impactful,. we had to talk with him about it.

TSWS: Okay so let's begin with the Alone In The Crowd album. This is a hard rock record with some edge and alternative undertone and great riffs. Where did this record come from?

My music is like a continuous narrative of things going on in my life or observations of things in my surroundings. I feel like each album is a continuation of a story in my head of whatever brings me laughter, joy, sadness, anger, or love in a sense. The record came at arguably the strangest time our modern musicians have ever had to deal with so it brought on a lot of difficulties and should have been released last year but as the world shut down so did the studios and I had to sit and wait for them to reopen to complete this album. All in all, I think this one is my absolute best so far. It hits on all kinds of things, feelings, and styles.

TSWS: Sounds like you're quite a killer guitar player. Did that start you off?

As a guitarist, I have been playing since I was about 15 years old. So I have never been one to go through the official lessons I opted to learn things myself and follow the techniques of my heroes or people I looked up to search for pointers here and there. The real fretboard fireworks on this release are largely due to my lead guitarist Michael "Duds" McDonald. He has been the lead axeman since my last album "Vandalized Memories" as well. We hit it off pretty well when we spoke about collaborating at an Open Mic Nite I hosted and pretty much ever since he has been my go-to guitar partner. I cannot say enough positive about his playing, diversity, or skill.

The music bug caught me quite early in life. I was the first generation of adolescents raised in front of something called MTV, back when it was new, and played actual music, not teen pregnancy shows 24-7. So as an impressionable youngster I recall seeing Van Halen and immediately wanting to learn guitar, like millions of others after seeing Edward Van Halen. I quickly realized after my first guitar lesson that learning how to play Happy Birthday gave me none of the satisfaction I sought from wanting to learn "Hot For Teacher" so as I mentioned I think it wasn't until I hit 15 when I picked the instrument up with total focus and passion. I played mainly in my room alone, wrote songs, and eventually bought a 4 track recording machine to record my songs in rough demos. and by about 2003 I began to break out of my shell and performed to audiences. Ever since then it's been full steam ahead no looking back.

TSWS: We've noticed some great videos you've done for some of your previous singles. Will you be dropping some videos for this album?

Thank you for saying that. Aside from recording and performing live, I think making music videos is the most fun thing to do. I am hoping that since the world is slowly returning to normal that I can get a music video for either "Trapped In Your Cell" or "Killing Time" and ideally in a perfect world I would love to do both but I am aiming for one at first.

TSWS: Some of these songs feel pretty personal. What inspires you to write?

My songs are basically a direct window into my life. I am not one to write about things I don't feel or relate to so they tend to be autobiographical. This album was written during the pandemic and that reflects a lot of the mood, it focuses on my love and relationship, facing demons, friendships, feeling unheard, loss, solitude, realizing my own mortality, and how short life is. Some heavy stuff and some beautiful stuff.
TSWS: With such a solid array of rock styles on this album, we wanted to know what bands really influenced you. Who changed you?

I am a lot like a sponge when it comes to influences. I sometimes won't even know I absorbed something until way after the fact. But my big influences or artists that shaped me, made me want to create, and made me feel are a lot of the classic artists. The Rolling Stones, Pink Floyd, David Bowie, Bllack Sabbath, Queen, Van Halen, Hanoi Rocks, and the Stone Roses.
TSWS: What's next for you as an artist?

I am hoping to get right back to work on the new music I have written since releasing this new album I am promoting "Alone In The Crowd" and fingers crossed making some music videos to accompany the release. Once I released the first single off this album and it hit 60,000 streams and pushed my total plays to 200,000 streams I found that my motivation is to keep active and focused so I don't lose a bit of momentum. TSWS: Will you be putting any focus on performing live when the time comes?

When 2020 began I had 51 gigs booked and by March that all but fell to the wayside. I briefly did performances on Facebook live, television streams, webisodes, and radio spots, but I crave the real crowd. It just isn't the same. Although I have found with the streams I reached a noticeably larger audience in a lot of different countries which is always cool. But I do have 4 or 5 performances booked so far this year which I hope is a sign of better things to come.

TSWS: What's your absolute favorite midnight snack? (It's a question of character)

This is a funny question. By day I don't eat a lot. Usually, one meal or so after working out and then as a ravenous insomniac I always find myself in the fridge around 4 am snacking on protein bars, beef jerky, or ice cream. TSWS: What are you doing when you're NOT working on music?

I am a visual artist so when the music isn't being worked on I do a lot of pencil drawings, graphic design, and painting.

My soundtrack this week has been a band from Scotland called Baby Chaos, Iggy Pop, Prince, The Primitives & Phantogram

TSWS: Before we leave, what would you like to say to your fans out there?

I would just like to say first of all thank you all for your support. As each release comes out I am able to see how much the fanbase has grown and I am just so grateful that the things I wrote and music I have made have hit a nerve to people locally here in the States and overseas. I am truly at a loss for words at the success I have been able to reach during the most bizarre year ever (2020) so I just want to say how much I appreciate everyone that is along with me on this ride. I promise you it will not be a boring trip.