An Interview With Just Tommy 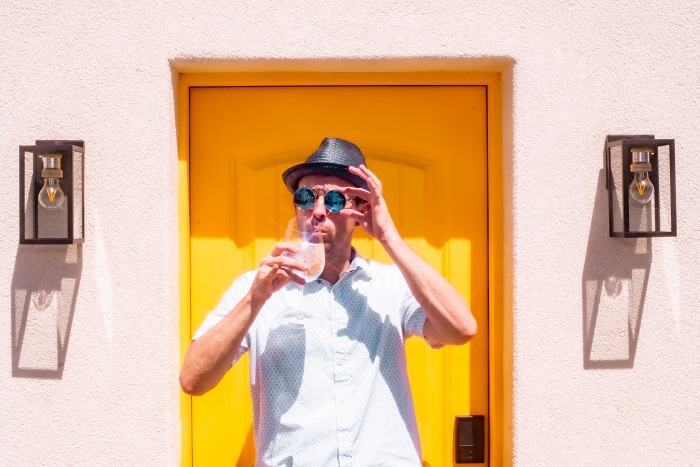 Just Tommy dropped a fresh cover of "Happy" by Pharrell Williams and puts a unique twist and feel to it along with a refreshing new energy and music video to boot.

The single was already bright but Just Tommy pushes the envelope to give it a new sheen and wonderfully high spirited excitement all while staying cool as a cucumber.

The song brings a little bit of a new edge and swagger to it and you can easily hear how much fun the artist had creating this one.

The track will put you in a better mood and in doing so accomplishes what it sets out to do and Just Tommy is having a blast all throughout its course.

It's always good to hear a new rendition of a modern classic and this version of the song only brings more to the table and with it's own flavor and palate.

Covering a song like this is tough to do. There are a lot of moving parts but Just Tommy not only pulled it off without a hitch, but also shot a full music video to accompany the single and damn is it killer.

The video for "Happy" is a bright and vibrant set of choreographed visuals that really set the tone.

A suburban setting and dancers in old fashioned bathing suits dance their hearts away as the sun shines down.

Everything about this release is endless good times and the song is now more danceable than ever.

There was some precision that went into this track and its accompanying video.

With such a great release, we wanted to have a chat with Just Tommy to find out where this came from and what may be next for the artist.

TSWS: What made you decide to cover this single?

2020 was the main inspiration behind my decision to cover Pharrell’s “Happy”. Thought I didn’t go into it thinking about “Happy” specifically. It just kind of happened. I was in the studio working on the album with Chuck, and we were having a conversation about what we were seeing the world, and the conversation got to a point where it came out that the world could use some more positivity to help cut through the noise. Pharrell’s video happened to be up on my laptop, so I cranked it to 11 and we just stared at each other in silence…smiling creepily and nodding emphatically. It was one of those light bulb moments you see on TV, but this one happened in real life.

TSWS: The song brings your own flavor to the song and I'm hearing several styles of pop infused here. Who are some of your biggest musical influences really?

It makes me really happy that you noticed! My biggest musical influences are from just about every genre you can imagine. Tom Morello (Rage Against The Machine), Stephen Carpenter (Deftones), & Mike Einziger (Incubus) for sure influenced my style as a guitarist. As a vocalist – Kurt Cobain (Nirvana), Adam Levine (Maroon 5), James Hetfield (Metallica), John Legend, Dave Grohl (Foo Fighters) & Tyler Joseph (Twenty One Pilots) are the biggest influences on my vocal style right now. I’m big on continuous improvement so the list is going to keep evolving.

TSWS: The video was really well done! Did it take long to choreograph the dancing and shots?

Thank you for the kind words! Bridgette Borzillo from CaZo Dance Theatre did the choreography for me, and thank goodness!!!! She had the choreography done pretty quickly, which meant Jenn (my wife) and I were able to start rehearsing six weeks prior to shooting. Why so far out? Because my dancing skills would make a panda sad…It’d be a sad panda situation. Also, I found out during this process just how hard dancing and singing at the same time are! The rehearsal videos are hilarious at the very least. When we have kids, I really hope they get their dancing skills from Jenn and not me.

A lot of this video has the vibe it does because aside from the choreography, the rest was done on the fly. We probably did an unnecessary number of planning calls ahead of time, but all of the camera locations were planned out really well ahead of time so shooting was smooth...mostly.

There was 1 shot that did take what felt like an hour to get right. I have 1 line in the video where I say, “Hey, you guys ready?” That should be easy, right?! Wrong! As soon as Levi (Director) yelled “Action!”, the panic monster showed up and scared my brain away. So what you see in the video is like take 100 at midnight, with a very impatient crew behind the camera. You know how the shirt I’m wearing in the daytime part has “<awkward />” across the chest? – It was a huge day of that. It was probably the most fun though if I’m being honest. Everyone got ice cream though

JUST TOMMY started as a creative outlet for me. Specifically, I started out doing EDM remixes of popular songs so I could learn the software. It started to evolve when I realized there were things I wanted to say but had no voice. So, I bought a microphone and started putting hours in.

The future! The idea of JUST TOMMY is to evolve from the ground up. My logo is a graphical reminder of that for me. I love coloring outside the lines when I create. I have 15 new tracks that have a release strategy ready to go when the time comes. I’m also actively working on improving & enhancing my skillset. I just finished a 30 day songwriting class a couple days ago, and started a vocal technique course that I’m pretty excited about it. It’s a group class that meets weekly on YouTube. I’m a big tech nerd btw.

TSWS: What is it you're doing when you're NOT working on music?

TSWS: How do you track your stuff? Do you have a home studio?

I do have a home studio! I converted one of our bedrooms into a musical fortress of solitude. I like to think of it as “zen-adjacent”.

Aside from the “Happy” and “September” covers, which were tracked at Pearl Sound Studios in Canton, MI, I’ve tracked nearly everything in my home studio. Actually, I did track the vocals for one of my original songs in a hotel room in Michigan during a snowstorm in February.

TSWS: Do you produce most of your own material as well?

I’m very fortunate to be able to work with Grammy Award winning super Producer/Engineer Chuck Alkazian (Pop Evil, Soundgarden, Tantric). I really like working with Chuck because he's able to see exactly what each song needs, and just where it needs it. He's also able to quickly identify things that don't fit, which is great because I have a small synth addiction and usually send waaaay too many synths. Lol.

Over quarantine, we developed a really efficient workflow - completely remote. It reminds me of the band “The Postal Service”, but a little faster thanks to technology. Through that process, the JUST TOMMY sound evolved into where it’s at right now. It's still evolving even with the material we're working on right now, but that's the really exciting thing about working with someone like Chuck. We're able to keep things fresh.

TSWS: Are you possibly planning any live performances? Is that part of what you do?

Heck YES! If everything goes as planned, I’ll be playing new material live in mid-September. The live show is a vital part of the JUST TOMMY strategy. I have a 15 light setup that I synchronized to my backing tracks so it’s like a full-blown mini concert when I play. I even have a haze machine so the lasers are visible. What’s more fun is it’s all controlled from my laptop…and it’s automated.

Well JUST TOMMY, of course! I’m working on a song at the moment. In life though, AJR. I'm a Ryan Met fan. I really like his creative style. Also, T-Pain. He does a lot for the music & streaming communities on Twitch. I’m definitely a fan. Plus, his streams are hilarious AND educational at the same time.

TSWS: This cover seems like a bit of a big undertaking. Any advice you'd have for other up and coming artists out there?

It’s definitely a lot of work. I have an amazing team that I’m extremely lucky to have working with me. Teams and workloads aside, my advice is: 1. Make a plan 2. Work the plan 3. Update the plan as needed.

TSWS: Can we expect more from you this year?

Absolutely! The rest of 2021 is going to be awesome from my perspective. I’m releasing my next single, RUN! on 9/10/21. I’m also going to be releasing the music video for “Waiting For The Weekend”. We’re in the process of shooting it right now. Also merch. I’m doing something unique for my fans with my merch. I’m building it out online right now but I’ll be making some noise about it very soon…

Thank YOU for listening & watching! Also, come say hello and hang out. I'm pretty active on IG(@imjusttommy), and am just getting set up on Twitch (@IamJUSTTOMMY), where I'll be giving you an inside look at what I'm up to as a solo artist. One day it'll be designing single art, the next day I might be comping vocals. It'll be fun. Also, I appreciate you.