An Interview With Kama Linden 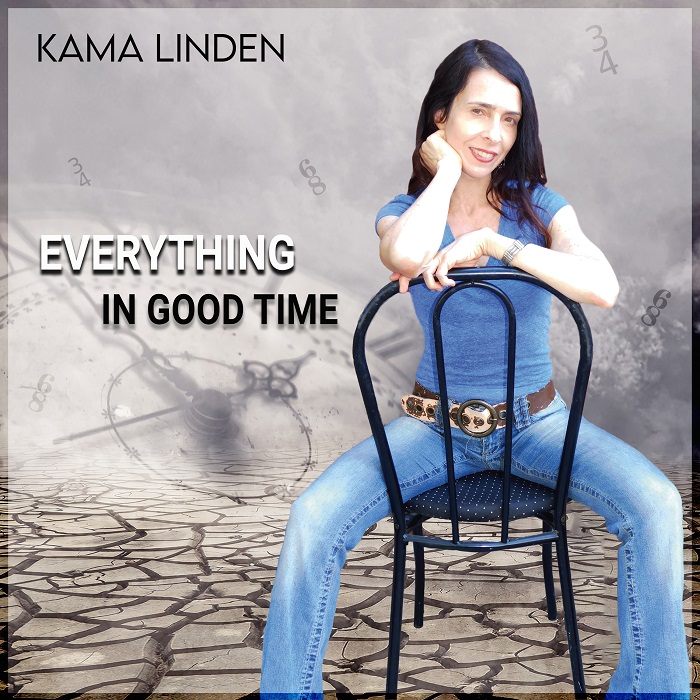 The Everything In Good Time" album is powerful and incredibly fun.

The record showcases Linden's ability to write songs in an array of styles and all with a tasteful set of vocals that harmonize and lay out memorable melodies that stick in your head long after songs have ended.

There are anthemic and impactful power ballads that have an Americana backbone, shining with an honest and bright approach that makes you want more each time.

The great thing about this record is that you really don't know exactly what to expect but you know it's going to be good.

The album keeps true to a great pop sensibility and a very textured palette that is composed of vocals, guitars, and even keys and synths.

Songs get cinematic and the instrumentation and rhythms always keep you on your toes.

Some of the record even has a familiar and almost classic rock undertone with twangy guitars and pianos.

There is always something new to offer with each song and its refreshing each and every time.

This is a massive album that spans such a wonderful array of sounds and memories for the artist. It feels like a concept album of sorts as well if listened to from start to finish.

With such a great release, we wanted to have a talk with Kama Linden to find out where this all came from and what may be next for the artist

TSWS: Okay so let's talk about the Everything In Good Time album. This record has a wonderful palette of contemporary pop styles. Where did this album come from?

My heart. My experiences. My story. Everything In Good Time is a dedication to my Nana, who took care of me. She would always say, "Don't Worry. Everything is going to be fine". Every child and parental figure: "What will I be when I grow up"...and then you turn around and you are the parent, and the cycle repeats.

If I'm Wrong: I wrote this while driving on Route 70 near my beaches at the Jersey Shore. It came quick. It is about taking chances and having a life of no regrets.

Belmar Breezes: My paradise. My solace. Where I recharge and enjoy life. I run there. I do Yoga under my favorite tree.
You're On Video: Seeing Eric Garner murdered on cell phone video. George Floyd. The "Karens" on video. There is no hiding from being caught on camera and publically shamed.

Your Love Hurts is about being in a domestically abusive relationship and being unable to escape. Gabby Petito's recent death makes this song even more important.

I'm really Into you...I only felt this way once about a man I met in Australia. If we had more time...I might be writing you from down under.
She's Gone Country...my need for escape. And MUSIC!

Searching for Madonna: A tribute to the song "what if G-d were one of us"...people worship technology, and ignore those in need.
Sorry no we can't be friends: Every verse is something from my life.

We Could Be Friends: started out about the psycho who lives below, but then became a politcal song. If I didn't hate you so much...we could be friends.

Make Room For Mama 2020 is a remake, and a better version of my ultimate girl party song!

TSWS: This record feels personal and almost like a concept album. Is this true?

Yes. This album, and Better Late Than Never, are both concept albums. The stories of my life in different times of my life.

Better Late Than never was the single woman's race against time, or running out of time.    EIGT is realizing things will happen when they do, and you cannot FORCE them. Learning to relax and Let go.

TSWS: Did you record this on your own? What instruments are you performing on this record?

I drove to Nashville and recorded at MissStux studio, in the same space where I recorded "SOuthern COmfort" but under BETTER ownership. Darla took over when Billy bailed on me, and she hired the best musicians: Tony Toliver (piano/organ), JIm, James Mitchell, who would "get in my head" and read my mind, Timmy Patterson, who also runs the studio and is Darla's husband, bass, and Darla Perlozzi: who not only played the drums, but arranged everything for me! Rodney Ingle was the best engineer I ever had. We tracked all 12 songs (11 really) on day 1, and I sang all the songs on day 2, then Rodney would give me ideas for the harmonies, and I did each one line by line. Then he said Leave, I got this...I let him do his thing, and he sent me the wonderful mixes I have. He also did the mastering.I could not ask for better.

TSWS: Do you think this was something that came from chapters in your life?

See above and YES

TSWS: How does this album connect with your Better Late Than Never record?

See above and YES

TSWS: Can we expect any new music videos coming from you this year?

I have been "filming" the footage for BELMAR BREEZES since last summer. I think I finally got what I wanted, and I am ACTUALLY going to ATTEMPT to edit it myself and drop it into the song. Wish me LUCK.

TSWS: Are you working on anything new even now?

I am in the performing and promoting the %&)_ out of EVERYTHING IN GOOD TIME, but also dabbling and jotting down ideas for whatever will come next. EIGT needs to really get out there, and although I have been busking on every street corner, park and boardwalk that I can in NY and NJ, I finally got on a REAL STAGE with a MIC yesterday. So the promo and performing needs to happen for this album before I can truly throw myself into the next whatever.

TSWS: Did this album come out the way you expected?

TSWS: Was writing and recording this record a big undertaking for you?

It was easier and better than my past albums. I will for sure go back to Darla's studio, and let her do her thing. She did so right by me. Everyone did!
Will you be putting any focus on touring or live shows? Yes. Starting to make my contacts now to see who is having music again.

TSWS: Do you have a band that you rehearse with?

No. The beauty of NASHVILLE is the musicians for hire are better than anywhere, and not expensive, also no major attitude like in NY. Ready to rock. They live to make music. It is in their soul.

TSWS: What sort of things really inspire you to write songs?

Anything and everything. but one line or phrase can start it all. Taking time to "experience" vs just sit and write. That is why my notebooks are illegible. I am sometimes driving when I get an idea...

TSWS: How do you write your songs? Is it lyrics first or guitar chords maybe? How does it work for you?

Only twice have I ever written from chords. I have a 4 octave range, but I write to my voice, then figure out how to play it later. So every song is a new guitar lesson. Words and melody tend to happen simultaneously.

TSWS: What would you like to express to fans of the music?

Just major thanks. Thank you for listening to my stories, stopping when I busk, telling me YOUR story...to every little boy/girl who puts a dollar in my box to the gererous person who slips me a big bill when I wasn't looking...or buying a CD...thank you!