An Interview With Kristi Flagg 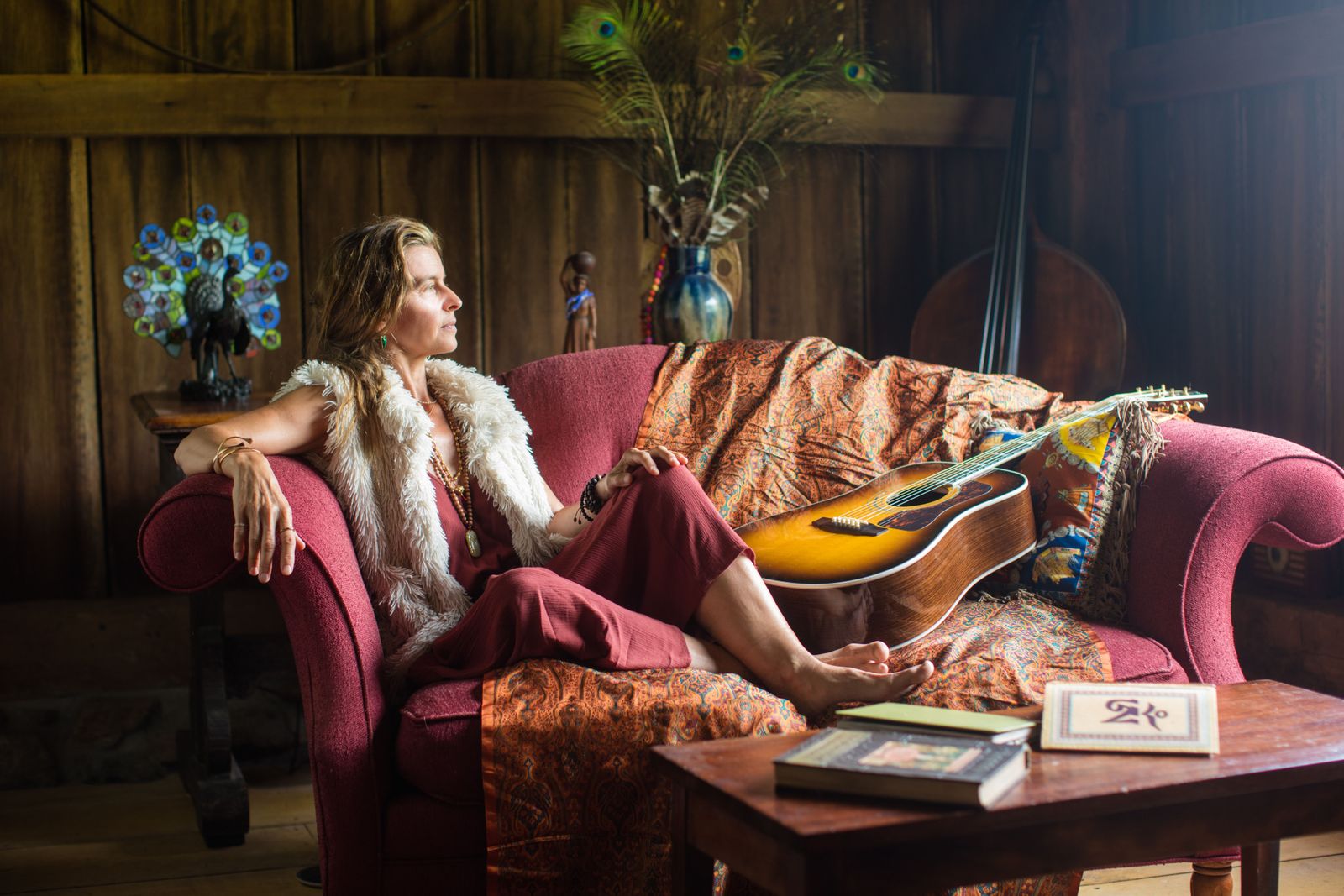 One thing is for sure, upon listening to this record you get the understanding that Flagg holds nothing back. There is a lot of love on this album and it's laden with radio friendly feel good songs that range in style without losing it's folk rock vibe.

Songs like "Heart Skips A Beat" sounds like something written in the 1950's with a doo-wop cross over feeland those passionate vocals.

One of the best on the album is a track dubbed "This Love"; a powerful and slightly 90's radio pop song that really feels inspirational.

With such a gorgeous album, we had to sit down with Kristi to talk about the record and more. Here's what happened.

TSWS: So Kristi, "This Love" is an incredibly uplifting song and is beautifullyladen with vocals. Where did this song come from?

Kristi: This Love was inspired by three things: coming back “home” to music after a long time away, celebrating a love affair I was newly wrapped up in and exalting the ever presence of Love. I had felt somewhat isolated for a long while, and as I moved back into writing and music I felt reunited with an ecstatic aspect of life: like falling in love with life’s  possibilities. The musical expression and uplifting aspect of the arrangement is intended to be celebratory: shouting out loud the joyful aspects of life. The bridge lyric and shift in melody and feeling is when I am reminding myself about the trials of life’s ups and downs. All ofthese life events are part of the larger journey. In every apparent struggle is the opportunity for increased awareness. Awareness in turn offers peace of mind.

The mantra “Om Namah Shivaya" in the chorus is one of the mostfamiliar of Hindu mantras and means "O salutations to the auspiciousone!” In addition, when broken down into syllables, Na sound represents earth, Ma sound represents water, Śi sound represents fire, Vā sound represents Pranic air, Ya sound represents sky or ether,so it also refers to the five elements that make up all of life. Its total meaning is that "universal consciousness is one”. I was inspired by Jai Uttal’s writing on his album Thunder Love where he skillfully fuses aspects of the sacred and profane into divine love songs. Having Jai’s voice complete the song’s ending was a beautiful gift. The vocals I created were my version of a The Beatles’ Sgt Pepper’s

horn section but I decided to create the horn parts with vocals instead. As I sang them, I was picturing animated horn players bopping around

TSWS: "This Love " is just one song from your Brave New View album. What was the inspiration behind this album's creation?

Kristi: I returned to writing music after many years away from it. I began going to a weekly open mic where playing new songs felt safe. After getting my feet wet initially playing cover tunes, my hand reached for the pen and paper one day. I was messing around with the guitar and liked the progression I had stumbled upon. This started happening a lot. At times the words and melodies seemed more like downloads as the writing happened quite readily. In a years time I had penned 40 songs. This was not normal for me, by any stretch of the imagination. As I shared the songs at the open mic (sometimes the tunes were only hours old) the lyric content and melodies landed with people quite  readily. I was inspired by my fellow songwriters and listeners alike and  came to realize that the way I was musically digesting the last few decades of my life had a particular resonance: sharing my ups and downs through song was offering support to others. That truly was my inspiration to go to the next step, which was recording.

TSWS: Listening through the record in full, it almost feels like a concept album of sorts. Would You say that's true?

Kristi: I really appreciate that comment. Yes. I would agree. Brave New View’s collection of material is about shifting the moments where I had

felt blind sided by life. I looked at the lessons and the bumps without a filter. In doing so I was able to finally and truly process some of the pain I had experienced (Our Story) and also, on the flip side, some of the new unbridled joy I was becoming more familiar with (Shelter Me). This helped me to look at my life’s journey with a new lens, affording me a Brave New View with which to move forward. I also had a ring side seat to a few friends who were also going through big life changes. As I watched them get caught up in fear of the unknown it was like watching salmon trying to swim upstream to get home to a heart fully in love with life. Songs like “If You Return to Me” and “Lost in the Thought of You” contemplate what happens to the individual when they finally sense a union with unconditional love, be it with a partner or with a more divine sense of love, which comes in many shapes and sizes and spiritual flavors. The songs on Brave New View are about letting go, diving in, experiencing unbridled joy, and realizing

that it’s our birth right to find happiness. If there is one over riding theme it would be: do not shy away from change. It gets harder as we move into adult responsibilities to sometimes accept that we have made a “not so healthy” choice. To recognize that and change course is very brave. I ended a 20 year marriage, a choice that has afforded me an incredible new chapter in my life.

TSWS: I'm hearing lots of combined styles both musically and vocally. What bands or artists really influenced you? Who changed you?

Kristi: I grew up listening to my siblings LP’s so I was weaned on Carole King, James Taylor, The Beach Boys, The Beatles, Joni Mitchell, Neil

Kristi: I guess I answered this question a bit before when I spoke of the open mic... But if you mean begin with a capital B I would say right in the

craddle. My Dad would sing to me, and I apparently responded to major and minor key changes. My Dad would test out his theory, and when he would shift from major to minor I would start to cry...Nice experiment, right? LOL. From early grade school and church choirs I landed leads and featured roles in musicals. In high school and college I studied classical voice. My interest eventually moved from musical theater to the singer songwriter scene in Boston when I was living there. I had recently bought my first guitar and was playing out at coffee houses doing opening acts for folks like Jonathon Edwards and Odetta.

TSWS: You are doing a series of live performances via YouTube which I think is a great idea. Do you think in the times we are in now, that focusing

Kristi: Definitely. It’s an odd time to “return” to this industry. When last I was truly active, I was driving a Honda civic up and down the coast playing

in coffee houses and bars and private house parties. My hope is the festival circuit will return next year, but in the meantime I will put on mini home concerts, and stay as engaged as possible through FaceBook and Instagram. I love performing live, and it’s an entirely different experience when folks are not in the room with you. Another avenue I plan to focus on is TV/Film. That’s a sure way to share with many listeners at one time and often an effective way to get people to really listen to song content, because they have a visual to connect it to. We opted to do 5 music videos to help promote this record for the same reason. Some folks connect more readily to a story when its presented through film. We often put music on in the background, but we are less inclined to put a film on and not engage by watching it. I think the videos help get the messages across.

TSWS: What advice would you have for other aspiring artists and songwriters out there trying to get heard?

Kristi: I’ll let you know in 6 months...LOL But one thing I will say, it’s never too late to return to music to express yourself. The boat only sails away if you let it. Often times it is docked, patiently waiting for us to step back on.

TSWS: It sounds like a lot of passion and love went into this record. Are you proud of this release?

Kristi: I so appreciate that. Yes. In a word, I am. Sometimes after a vocal take I would turn to Tracy at the mix console and nod my head: “That

felt true...” and we’d leave it at that. Overall my goal with both guitar and vocal takes was not to over do anything. Oftentimes it was the first take we would use for the record’s performance. It was important to me to work with a full take; performing the song top to bottom. Tracy said I was very “old school” that way. For me it’s about telling the story, and the best way for me to do that is to get inside of it and sing it to the listener. I wanted to offer an intimate connection so the listener could experience the lyric as personally as possible. I feel good that I held strong to that throughout the recording process.

TSWS: Before we go, what would you like to express or say to fans of your music out there?

Kristi: Thank you for listening, first of all. And for reading this interview! I guess I would like to remind folks if they dig what they hear, that it truly

takes a village to get music heard. Sometimes it’s who knows who knows who and then magic happens. I would like to thank folks for sharing via posts, and shares, and likes and forwards...In this era when we can’t grab concert tickets it’s even more important to ask for that support. So in advance I say: thank you. I’d love to hear what you think of the music. Please sign on to my mailing list and/or email me any thoughts you’d like to share. Deep bow of gratitude to you all for taking the time. And thank you for these groovy interview questions. Appreciate your time and efforts to help spread the news about the record...thank you.