An Interview With Marjorine 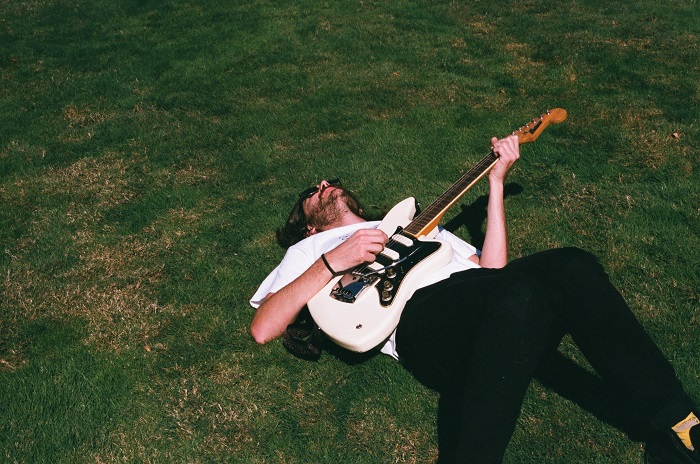 A new single from Marjorine blends a fresh indie pop feel with a classic rock and 90's alternative tone to make something that sounds groovy and edgy at the same time.

"Salton Sea' has it's dreamy aspects as well with ambient vocals that float along with the guitars and droning synth buried under it all.

It's a refreshing style that gives off an old school Beck feel.

This single is loaded with experimental guitars that fuzz out and add layers of psychedelia and atmosphere to the already massive soundscape.

The song builds and grows to something reminiscent of what you'd hear at the end of a 70's film.

You can hear the fun the artist had with this creation from start to finish and the love for his craft is loud and clear.

It's a great and obvious factor that Marjorie has had plenty of classic rock influence in his songwriting and the indie and deepening psych-pop approach is thriving within his veins.

This song was an outstanding new release from a young artist that holds nothing back when recording his music and we need much more of that aspect in today's songwriters to be honest.

You don't need to push the envelope. You just need to be free with your music.

Marjorine is an excellent example of just that.

With such a great single, we wanted to have a chat with the artist about where this all began for him. Here is what happened.

TSWS: Okay so let's start with "Salton Sea". This track has a very cool cross over sound with some ambient indie-pop and an almost 90's alt-pop undertone. Where did this track come from?

Marjorine: I actually created this track one day after getting frustrated while working on another song. Sometimes it’s super helpful for me to just step back from something I’ve been working on for some time and just create something totally fresh. In the end, I generally learn a lot about where I want the original track to go.

TSWS: I'm hearing all sorts of cool styles in this track. Who are your actual biggest musical influences?

Marjorine: The King of Limbs (and particularly how Radiohead performed it live on From the Basement) is definitely a major influence on Marjorine. The creation of this track also coincided with me becoming pretty obsessed with Sonic Youth’s Daydream Nation and I think you can hear parts of that influence on the ending of this song in particular.

Marjorine: I’ve been making electronic music alongside playing in bands for a while now but since the start of the pandemic, I’ve become more focused on creating a project that combines those two aspects of my output into one cohesive sound.

TSWS: How do you write your songs? Is it lyrics first or guitar parts? How does it work for you?

Marjorine: Generally it all will start with a loop of some sort. This could be anything from drums, guitars, synths, bass etc. It has to be compelling enough of a loop for me to want to listen to it over and over for a while before I’m determined to move on and add more to it. Lyrics and vocals are usually one of the last things to be written and are pretty spontaneous as I come up with a melody on the fly. Some stuff can get chopped or changed later, but I always try to stick to most of the first few takes as I feel as though they always are the freshest and have the most energy from being performed consecutively.

Marjorine: This track was written after a day where I visited the Salton Sea which was very hazy and otherworldly when I was there. I’m always writing though, and generally just getting out of the house and observing the world around me helps get me stimulated enough to write something new. I also love to read and watch interviews with artists in a variety of genres and mediums. Just hearing other people talk about their process and mindset, no matter how different our music or art is, can help me gain more perspective on my own output.

Marjorine: Probably impersonating a dog, reading or working on an animated TV show about dogs.

Marjorine: Hopefully finishing up what will be an album or two EPs by the end of the year and getting together with some friends to flesh out some of these tracks for playing live.

TSWS: Will you be putting any focuson live shows when the time comes?

The new albums from the Muckers, Psymon Spine and Spirit Award are very good and getting a lot of listens at home. I’ve also been listening to Transformer by Lou Reed a lot recently in addition to the Sonic Youth obsession I referred to before. I didn’t realize it was produced by Bowie up until recently and now I can’t not hear Bowie’s vocals on the outro of "Satelite of Love".

TSWS: Any advice you'd give to other up and coming artists trying to get heard out there?

Marjorine: When you get frustrated in the studio, take your track and listen to it on a completely different set of speakers in another room.

Marjorine: I’ve probably got some Marjorine aprons going up on Bandcamp sometime soon so keep your eyes peeled for those.