An Interview With Mark Steiner 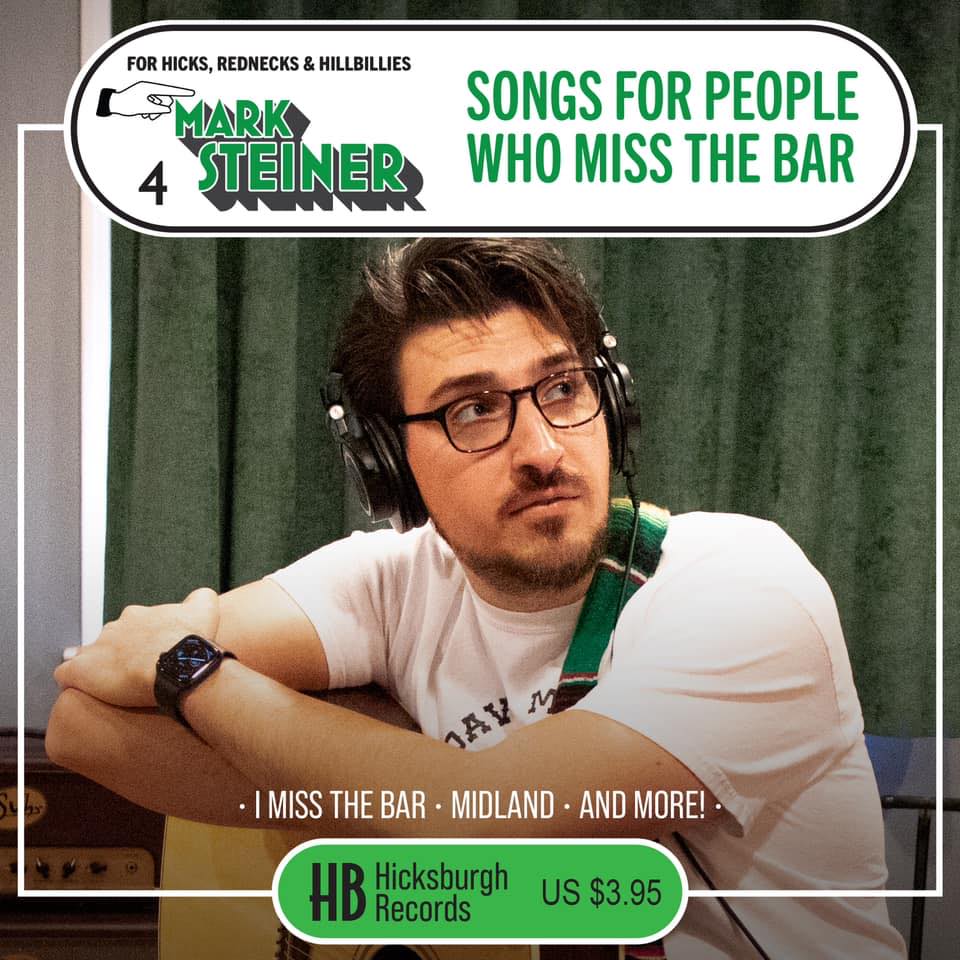 Mark Steiner just released an EP that brings classic country and elements of classic rock and folk all together for one colorful record that all hits that genuine country aesthetic perfectly.

The Songs For People Who Miss The Bar is humorous (in case you couldn't tell by the EP title already), but also honest, and heartfelt. You can absolutely hear the love Steiner has for his craft with each song. Whether the song is a bit more serious or not.

There are some rootsy love songs that hit all the right chords and are performed with a wonderful passion.

It's these moments you can feel the good time he must have had recording this record.

Lyrically descriptive and sometimes incredibly detailed, some songs really can pull up situations in your own life that make the song relatable.

"I Miss The Bar" is the lead song on the EP and damn is it honest but endlessly funny. Steiner has no problem singing about things we all think but rarely say out loud. This is the more bright and full sound he puts forth on the record and it's so good it's ridiculous. Lap steels wail and the band gets down. You'll get up and shake your ass to the track without a doubt and it'll hit all kinds of country fans just right.

Other songs like the acoustic and stripped down "Can Do Man" is like a personal live performance and it each track feesl just as good as the last.

With such a vibrant record, we wantd to have a sit down with Mark Steiner to talk shop. Here's what went down.

TSWS: Okay so let's start off with the Songs For People Who Miss The Bar EP. This record is really colorful to me. There is country, singer-songwriter, and more plus some great humor. Where did this EP comefrom exactly?

"Songs for People Who Miss the Bar" is a little more colorful because I have two distinct parts in it that sort of tie together. I've always wanted to write a real bar-banger Toby Keith style song, and I feel I did that with "I Miss the Bar." It came out better than I could've wanted. Then I wanted to make some acoustic solo recordings to showcase my live solo style. I've been playing live by myself a lot and most of my releases so far didn't really display that particular sound that I've been honing at performances.

TSWS: Again, I love the array of styles undertones on the record. What bands and artists really influenced you?

My main influences are guys like Willie Nelson and George Jones. I love that brash, forward sound and energy they always have. For a song like "I Miss the Bar," guys like Toby Keith and Brad Paisley are getting a clear nod. They'd both write these amazing bar-bangers you could play on the jukebox 10 or 20 years after they made it and still get the crowd going. Otherwise, artists like Colter Wall and Tyler Childers really inspired me to get writing that older sound that I loved. They proved that it was possible to succeed writing that sound again.

TSWS: How did all  of this even start for you?

I've been a guitarist since I was little and even played live a few times in High School. About the only time I wasn't musical was in college. A few years out of college, I saw some folks like Colter Wall and Sierra Ferrell and really liked that they were bringing back that traditional sound. So I start learning how to write songs, and I'm playing open mics and gigs. Eventually I was so intrigued that I took a trip down to Nashville by myself to see these dives they all go to. When I met a few of my heroes in person and found out they were just regular people, I went right home and released "Big Hoss." Ever since, I've been keeping it going just like they've been.

TSWS: Did you used to perform live at all? Will you be focusing on that when the time comes?

Live performance was my first love in music. So I definitely will be going back to that as it opens up. I generally even try to write my songs so they work well live. I try to make punchy lyrics, strong chord changes, key changes and other musical elements that communicate the feel of the song clearly. These types of things are what make me more confident to present these live because the songs speak for themselves in every way they should.

My next album is in the planning stage, but it's looking to be more of a 60's style country sound. I want to make something like that because I adore that sound, and I find there's not enough of it. They have all but abandoned that flavor of country nowadays, but I want more so I guess I have to make it.

TSWS: What is someone like you doing when you're  NOT working on music? (I know you're not getting hammered in a public place).

I'm an engineer in my day job, so I typically do a fair amount of travel during the year. Normally I'd be going to concerts as well, and hitting up Penguin and Pirate games in whatever time is left. But being that almost all of that has been banned, I've taken up photography in COVID. That seems to be a hobby I've been needing for a while, and it brings me a lot of pleasure.

I'm inspired by the tradition and history of country music. I think the mainstream has gotten way too far away from its roots. The traditional style affords a lot more room for interpretation and presentation of different vibes. The new stuff all sounds like superhero movie shit, or the same thing over and over again. Country used to be able to hit hard topics, funny topics, whatever you like. I don't want it to die like this, so I just keep trying to fight the good fight writing more like I remember it.

TSWS: You've released a steady stream of songs since 2019. What kind of advice would you have for other up  and coming artists trying to get heard?

For an up and coming artist, focus on writing one song that you feel confident presenting and recording. That's all there is to it. A lot of guys trip over their own feet worrying about whether their sound is right when they don't have anything out. Or they worry about releasing too much when they haven't released anything at all. Get one thing out there, get your foot in the door and then figure out where to go next. Your first single never blows up unless you have a suitcase full of cash and also give it to the right person.

Colter Wall's "Western Swing and Waltzes" is still sitting on my turntable. I haven't heard anything to knock it off yet. He absolutely nailed it there. But I also don't spend too much time seeking out new stuff unless it's made by my friends, guys like Austin Kerr and David Miner. They've been releasing great stuff too. In general, there's been a marked decrease in quality from the bigtime guys during COVID, but I've seen my buddies get 20x better in the last year.

TSWS: What is your absolute favorite thing about making or performing music?

I got to sing with a band once before COVID, then our gigs got cancelled out. That was a dream come true. I remember watching country bands as a little kid and dancing along. Then in middle school watching jazz bands like Joe Negri, I was fascinated by how the band was able to carry along together just on something like a key. I think country is awesome because of that. When you sing with a band, it feels like being a captain of a ship, and when you're with good guys, it's amazing to watch them play along.

Thanks for all the love and support so far. If you haven't checked out my new EP, go give it a listen. Come out to my shows as I have them, and keep your ears open for more good stuff!