An Interview With Nina Grace 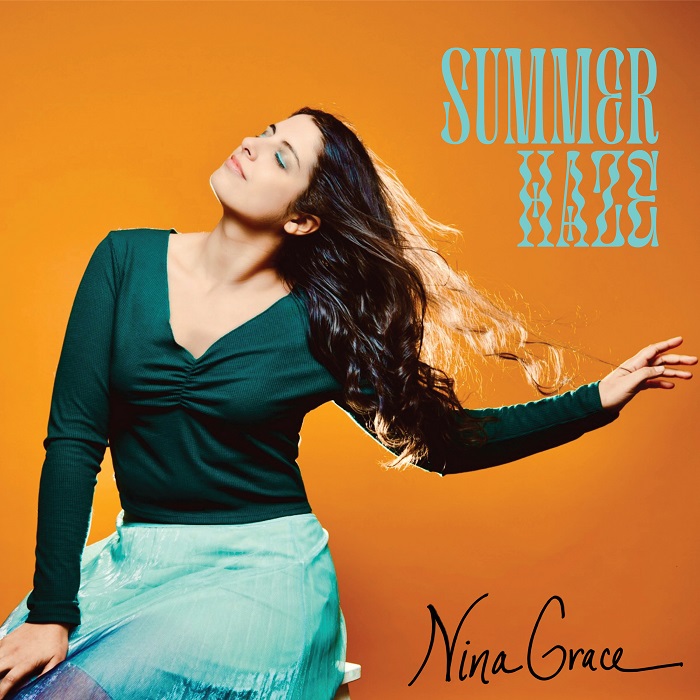 A new single release from Nina Grace really nails a unique cross between a noir jazz undertone and an edgy contemporary R&B and pop sound but it's done with such character and presence it's incredibly memorable.

"Summer Haze" comes through cinematic and experimental with fuzztone synths and thsi sly and cool approach that really works with the artists classic jazz vocal style.

She;s got that attitude and allure in her singing that brings so much color that it turns heads from across the room.

The track boasts strings, piano, synths, and more that all come thogether to create this one of a kind silky feeling track.

It's got a cinematic tonality to it that becomes so infectious right from the start that it's wonderful.

The single gets under your skin in all the best ways possible. You get caught up in its story and the vivid visuals it paints for you.

Grace's youthful energy and mature songwriting style meld into each other and the atmosphere it makes is tasteful and impressive.

It's got swagger and flavor. It's sultry but inviting. It's addicting and graceful in a way too.

This song feels current but oldschool at the same time as well.

It's hard to put your finger on exactly where this song belongs but you do know straight away, that it belongs in your headphones.

This is the sound ttrack for your day.

With a single like this one, we had to talk with Nina Grace about the song. Here's what happened.

TSWS: Okay so let's start with "Summer Haze". This track had quite a soulful vibe with a cinematic undertone to it! Where did this track come from?

Summer Haze was actually written over 3 years ago. It was in the middle of a lot. You know those times when there’s big changes all culminating at once? I was moving in with a few strangers, I was starting a new job, and a romantic relationship had just suddenly ended. It naturally brought out a story about welcoming change and not resisting it. Writing it and singing it was almost consolation when things felt overwhelming. The song was actually born because I heard a friend playing a few chords on loop and I was mesmerized. I asked them to send it to me and I wrote all the lyrics just listening to the loop. You could definitely say that what I was going through at the time had a big influence on the sound. The cinematic undertone of my music probably comes from my love for film.

TSWS: I'm certainly hearing a few different styles on this track. Who are some of your biggest musical influences?

I fortunately grew up with parents who adored music. My dad used to DJ and accumulated a lot of vinyl records, and my mom is a great singer and we had countless singing sessions in the car. Although I listen to everything, I sometimes lean more toward older music from the 60’s to the 80’s because of all the hours I spent listening with my parents. Classic soul and rock are in my bones. On the other hand, I spent a lot of time listening to artists on my own, scouring the internet for new music. The artists I remember the most are John Legend and Regina Spektor. Nowadays, I would cite London Grammar, Adele, and Lianne La Havas as some of my biggest influences.

vWhat's next for you as an artist?

Definitely to keep growing as a producer. Summer Haze was the first song fully produced by me and I am completely empowered by the process. I now have a stronger sense of ownership with my music. I still have a lot to learn so I just have to keep honing those skills.

I’m currently working on an EP that I’m very excited about. Summer Haze is the first single release, and there are at least 3 other songs that will form the EP. With every solo release, my sound becomes more refined. Now that I am able to produce my music, I’m looking forward to a really cohesive record.

TSWS: What are you performing aside from vocals on this song?

Everything! (Except for the piano because that’s the loop I had my friend send over). Earlier this year, I purchased some hardware that made a lot of the production process very smooth. I used ROLI LUMI KEYS to write and record the bass, lead guitar, synths, horns, strings, and drums. So almost everything you hear is a software instrument being played by me on the ROLI.

TSWS: How did recording and writing songs start for you?

I had an internship in college with a phenomenal producer and audio engineer, Ebonie Smith. She was an alum of my college (shoutout to Barnard College). I saw an interview between her and my music advisor on the school’s website and I immediately contacted her. My primary job was to help with the administrative aspects of putting together a music festival showcasing women in music production. One of my assignments during the internship was to write and produce a song in GarageBand. In retrospect, this was a really important moment. Up until then, I had written poetry and I wrote a song for a friend’s birthday when we were 16. That’s it! My GarageBand song was the first of many songs that would be written and recorded. I kept writing after this, and eventually enrolled in a music production course at school. I would say this was the genesis.

I have a passion for learning languages, and that extends to a love for watching foreign television and film. If I’m not doing that, I’m probably drinking tea and cuddling with my cat.

TSWS: This track feels like a big undertaking. What kind of advice would you have for up and coming artists out there?

Be patient with yourself.  Do your best to be consistent. For me, this meant getting better at saying "no" to things so I could actually sit down and make time for music. And invest in tools & classes that make you a better singer, songwriter, producer... whatever it is that you do!

TSWS: Can we expect any music videos coming from you anytime soon?

You can definitely expect one by the end of 2022!

TSWS: Okay so you wake up in the middle of the night starving. What's your go-to midnight snack?

Dark chocolate - no thinking required for that one !

Your support doesn’t go unnoticed. And no act of support is too small. A follow on Spotify, sharing my music with a friend, or coming to a show - it all adds up and is so appreciated.