A New Single and Interview With Odd City 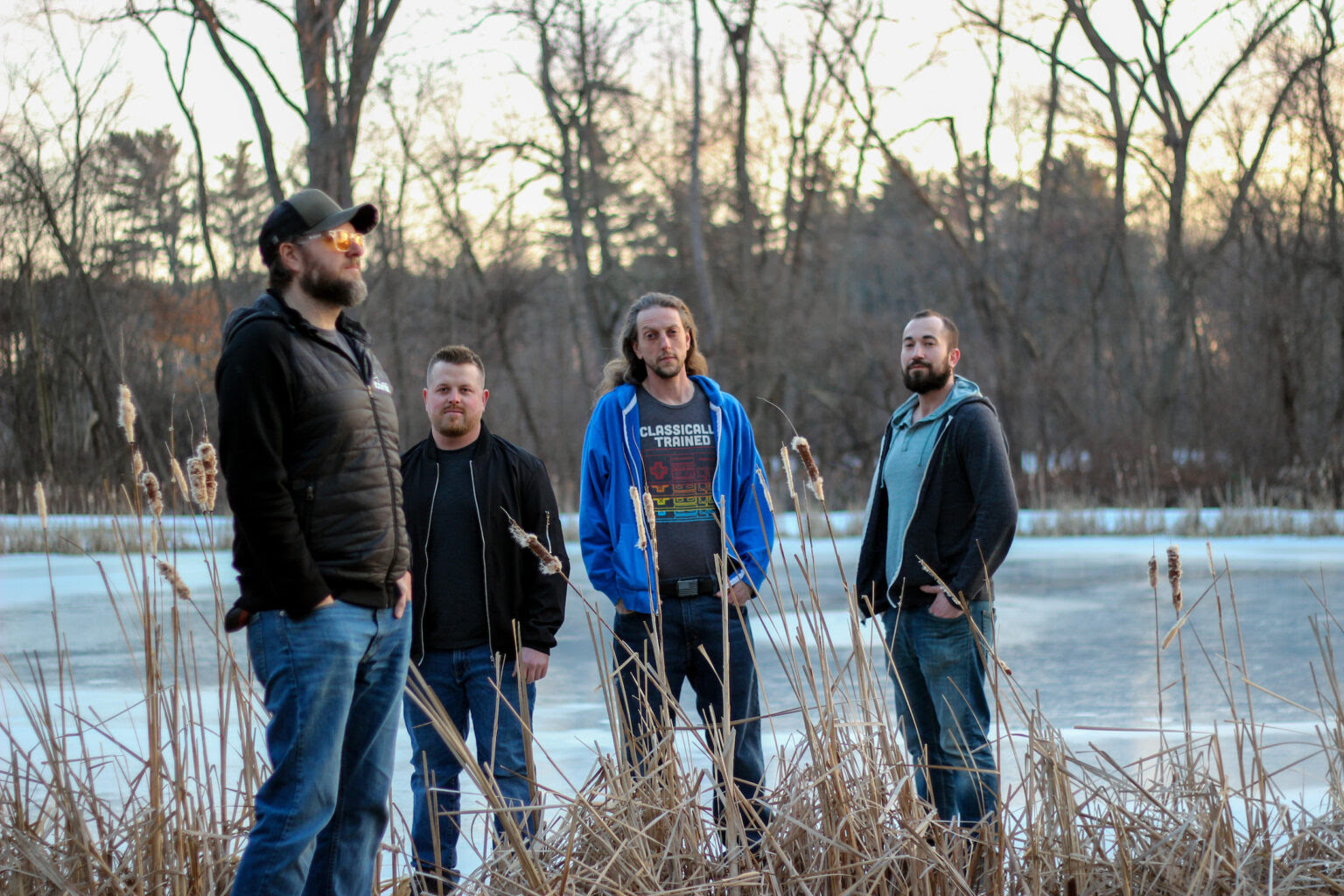 Odd City returns with a new single that breeds a massively cinematic and driving feel with a more clean and crisp undertone along with some tasteful vocal harmonies and the sound of it with an alt-rock drumming style is fantastic.

"Slink" features some really gracefully performed singing and this vast and almost progressive feel that seems intensely and emotionally driven and the guitars are just outstanding on this thing.

They help all the builds of the song and add such a spacey atmosphere to it that it becomes a more full bodied soundscape all in all.

This one stands on its own two feet with impactful and addictive melodies coming from both guitars and vocals and it has a floaty overtone with some even funk guitar work but does indeed stick to that rock playing field and it all has tons of fun and intricate sections that make the song shine. Especially the drums. The drumming on this track is really something that makes it what it is.

The single sticks to its guns and doesn't explode into a heavy section but rather explodes into some guitar solos that are intense but done with perfect dynamic and strength. Not over the top but just right.

This release shows a little bit of a different side to Odd City and the cool thing is part of the upcoming full length album which is bound to have more than a few gems on it.

This isn't our first rodeo with Odd City and these guys never really cease to surprise us.

Their music is performed with heart and that comes through all over the place.

You can certainly see a song like this in a film though. It's got that dramatic impact for sure.

With the release of "Slink", we wanted to have them in for a talk and see what's actually coming next for them and where this single was born from.

TSWS: Welcome back guys! Let's start with "Slink"! What's this one about?

Brett: So I usually deflect on explaining my lyrics, but this one is basically about A night out with
a close friend. That night we met a character that was a little nefarious and deceitful which led
to a bad night. It was a woman, and not to go into too much detail, but I drew from other
experiences to round out the view these lyrics have. There are a few inside jokes in this one.

Kap: I have to paint a story in my head to remember lyrics, especially if I didn’t write them, so I
have a whole movie in my head of Brett and his buddy and this succubus that I never actually
met. But it makes sense to me now, and I’ve always liked Bretts wordplay in the song.

TSWS: I love the style on this one! Do you guys write songs together or one person sort of has the
idea?

Brett: Musically Pavel, Kap, and I jammed this one out in the basement.

Mike: This is an interesting one because the lyrics and the lead guitar/melody guitar came after
the song was mostly put together. It was a great mellow instrumental, but had such a killer
opportunity to be something bigger. Adding Brett’s lyrics and the melody guitar lines really
made it feel like a complete song.

Pavel: This one started out as a jam. At the time of writing this song I remember just getting the
7 string guitar. Everything we were writing was super heavy, mean and angry at times. So this
came along and we need a "pretty" sounding song. It really evolved with the lyrics and
especially the second guitar that completed the melody.

TSWS: Are you planning anything in terms of next releases or live shows?

Brett: Live shows are happening in October and November in the Detroit area.

Mike: Yeah, our first show this summer is at Otus Supply in Detroit on November 19th. Come
check us out with some other great bands.

Kap: We have been working, pretty consistently, on both new songs for the next album, as well
as going back to repolish and finish some of our older jams and likely adding to them. I am

really excited about what we have all been writing, but playing shows again is a must do. There
is nothing like seeing a band live at full energy. It’s been way too long!

TSWS: Do you guys record at a studio and book time? Or do you have a set up at someone's house to
record?

Brett: We recorded our record with Chuck Alkazian at Pearl Sound studios which he owns.
Chuck is the man. We enjoyed working with him a lot.

Mike: We do have a home studio that is used for writing/demoing and even pre-production.
Some of the bits of this song were actually done there, but the majority of it is done with
Chuckie @ Pearl.

TSWS: Are lyrics written first generally? Or does the music come first?

Brett: Usually the Music is complete long before the lyrics are written. I use the music to help
me write. I need the perspective of the music to elicit a response so I can move into that space.

Pavel: We start with the music. Brett and I usually will track some rough ideas that give the
band a canvas to work with.

Kap: We just pulled a song out during practice the other day. All four of us were jamming,
messing around and I started singing something. It just seemed to work so we went back to it
the next practice and started to actually write it into a song. So that was different (laughing)!

TSWS: Anything in the way of music videos coming out?

Brett: Hopefully we get a video done soon. We have a lyric video for our song “The Upside
Down” that’s up on YouTube, my good friend made it for us just because, but that's it right
now.

Mike: We’ve got plans to do a real video as well, just trying to decide the right song to go for.
Pavel: I know we have a green screen somewhere and Mike has some nice cameras. We are
planning and have discussed ideas.

TSWS: For the lead guitar player, who are some of your main influences for solos?

Mike: My influences are all over the place, but on this one it definitely has a bit of Gilmore in it.
It is a GL Strat through a Fender Twin and we actually had to work a bit to get it to sound a
little less like Pink Floyd and more like me tonally as we recorded. Ended up driving it with a
DS1 with the gain set to 1.5 instead of the pure amp tone. Was fun to work that out.

TSWS: Do you guys draw influence or inspiration from other places like film for example?

Kap: I am a firm believer that everything in life influences us, basically all the time. If someone
cuts you off in traffic and you try to write a song 10 seconds later, I’ll bet it won’t sound like, ya
know, John Lennon’s “Imagine”. Even music that I don’t like influences me, or can inspire me to
try to write something that does’t suck. Film, specifically though, seems to be a great
influencer. You can’t help but think after a good film.

Brett: I can only speak for myself, I just try to connect with signals in the ether, as hippy as that
sounds, the rest comes with persistence through enjoyment of the music. I’m sure
subconsciously many other works like film or other music bleed into that.

Mike: I draw inspiration from other music, film, art, and just general life experience.
Sometimes my thoughts are focused around what I want my guitar parts to drive forward, like
“I would love this to be in the movie credits” or “this part will be killer for driving fast in a car”.
Whether that translates or not is really up to the listener.

TSWS: Do you guys all sit in on the mixing of these tracks?

Brett: Nope I have no clue on mixing, I leave it to the pros.

Mike: I’ve been doing it casually for close to 20 years, so I definitely have feedback that can be
constructive. I’m not up to snuff with the speed and accuracy that a pro engineer can get, but
at least I speak the language passably so I like to sit in whenever possible.

Kap: Mike and I are both pretty into the nuts and bolts of recording, although he knows way
more about equipment than me, like it’s not even funny. But I used to record my old band,
similarly to how Mike records us now in his basement, so I usually have a lot to say during
editing, mixing, or just production in general. Wherever I think I can actually be useful.

TSWS: If you were to open for a band of your own choice, who would it be?

Brett: I would like to open for Alice In Chains or Deftones.

Mike: Muse. But it would be sad to not get to use whatever 80’ animatronic dinosaur they
brought on tour this year for our set.

Pavel: Whoever wants to play with us is always a joy for me. I would love to open up for
Incubus!

Kap: That’s gotta be the hardest question I have ever been asked. Do I be selfish and just pick
my favorite band even though the show may be terrible? Oh man… I guess I would say Tool,
they are in my top 3 bands anyway, and I actually think their fans might not hate us.

TSWS: What can fans expect from you this year?

Brett: At least one “music” Video. Hopefully some live videos. Live performances for those who
are near. I’d like to do another record before the end of the year somehow. It would be too
soon but I’m a spaz so yeah probably not.

Pavel: Fans can finally see us perform live again. Possibly come out with a cool video for
everyone to enjoy. We are writing new music that I think will take us to the next level. We are
very excited for our new music. Thank you so very much for taking your time to ask us.

Kap: We have fans?(Laughing) I think it will probably take until after January to get the next
record done, but we will be making time for that at the end of the summer, so who knows.