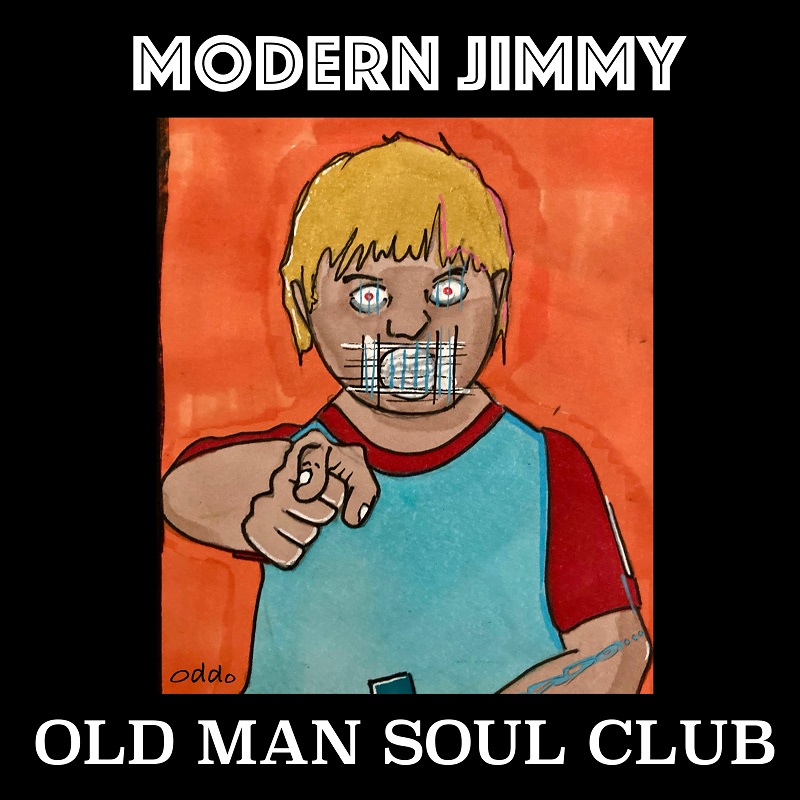 Old Man Soul Club has released a full length album and it's damn fun garage rock influenced by heavy classic rock and feels like a wide range of undertone styles and even different era's of songwriting rolled into one huge and vibrant record.

The Modern Jimmy album is loaded with cinematic ballads laced with horns, piano, guitar and with a lush and full feel along with fuzz rock tracks complete with all the raw energy you'd want.

Most of all, the record is packed with soul and some real deal 60's rock aesthetic bleeding through the seams at almost all times.

Think Rolling Stones and Van Morrison but for today.

There is so much heart, so much love, so much passion with each and every song it's actually compelling.

This is a powerhouse of an album and even the guitar work has soul.

A tasteful and gracefully performed album, Modern Jimmy is anything but modern. It's pinned that classic rock sound and hits the mark every single time.

This is an impressive record and it swells and sways musically as it's emotion drives it. Soon enough it's emotion begins to drive you.

With such an outstanding piece of work released, we wanted to sit down with the band to talk about where it all comes from. Here's what happened.

TSWS: Okay so let's start with the Modern Jimmy album. This record is a massive one and it goes through some killer fuzztone garage rock and classic rock feels. Where did this record come from?

O.M.S.C. - The idea was to write songs around the idea of someone who is lost with their place in the world and was trying to find their way back home. We were thinking about characters in films, songs and books and what may have happened to them after the film, song or book had ended initially. The idea of Modern Jimmy was born out that and the songs took on their own form from watching the people around us in day to day living and putting it to song. Then it was writing its own story after that really.

TSWS: This feels like it's a concept album. Is that correct?

O.M.S.C. - Totally, I loved what The Lemon Twigs were doing when I was staring out the album and am a massive fan of Ogdens “Small Faces” and Quadrophenia “The Who” for many years. That all rubbed off on us, but we were working it in a classic song writing style using interludes to knit them (the songs) together and give the story line bridges.

TSWS: Was this a long time in the making?

O.M.S.C. - It wasn’t so much long in the making but maybe longer in the letting go of. We knew the album was sounding really good and the postproduction was crucial in that, making the album solid, that’s the time part. A lot of very good music I’ve heard or been involved in making has fallen at this stage for me, taking it out of the oven before its cooked through and really ready to served up maybe.

O.M.S.C. - True story this…I have been obsessed with what sound does and why it does something to me since I was pre-school, fascinated by my Dads records and not always to his delight his record player too and the noise that came out when the two went together, blew me away. He worked in an audio shop for a while when I was young, so old tape recorders, microphones, headphones, decks and records were mine to explore (take apart to see what’s inside) and that has luckily never gone away and only grown into a love of plugins for music production.

TSWS: I can hear some great styles of rock on this album. What are some of your biggest musical influences?

O.M.S.C. - OOffff, that’s a big question, there is a lot going on throughout this record it’s almost a kaleidoscope of sound but underpinned by singer-songwriter, blues, soul, rock. If there’s a tip of the hat there i would have to say a lot of British songwriter influence but I could do a Springsteen and Neil Young evening no problem. The Beatles was never too far away in the car, the many genres of Reggae always got spun and Soul Singers/Bands that hold me in a trance always hits the spot.

There are quite a few there really and but I couldn’t leave out Chuck Berry his music has driven me a happy kind of nuts for many years. But really there are so many, check the “Modern Jimmy” Under The Influences playlist on our Spotify page for some of Jimmys Influences, it’s all there.

O.M.S.C. - We are starting work on some roots’ type songs at the moment, stripping it all back a bit and growing again. It’s kind of difficult at the moment with all the obvious but thankfully we do have pot of songs that we can bounce back and forth to each other to get going and keep the songs moving. I think its time to go there, seed to earth and grow again.

TSWS: Will you be focusing on live performances when the time comes?

O.M.S.C. - NOT working on music! I’m recording someone else working on music! Jokes aside we have quite an eclectic bunch in the band who have many other talents such as a Tattoo Artist, Mental Health Awareness Coach, A Son Of A Preacher Man, there is a Husband and Wife team on the album too that are generally near a laptop or in study mode somewhere.

TSWS: With such a huge record out  it seems like quite the accomplishment. What sort of advice would you have for up and coming bands trying to get heard out there?

O.M.S.C. - Thanks, my advice to any band should they want to take it would be to follow yourself, be you, craft your songs until they say “YES” to you. You got to enjoy it, be honest with yourself and your sound, don’t be afraid of getting it wrong, you could be right!

O.M.S.C. - Thanks for listening and come and join us on the socials for a chat. If you liked what you heard, tell someone else so they can like it too. Cheers.