An Interview With Phantom Electric 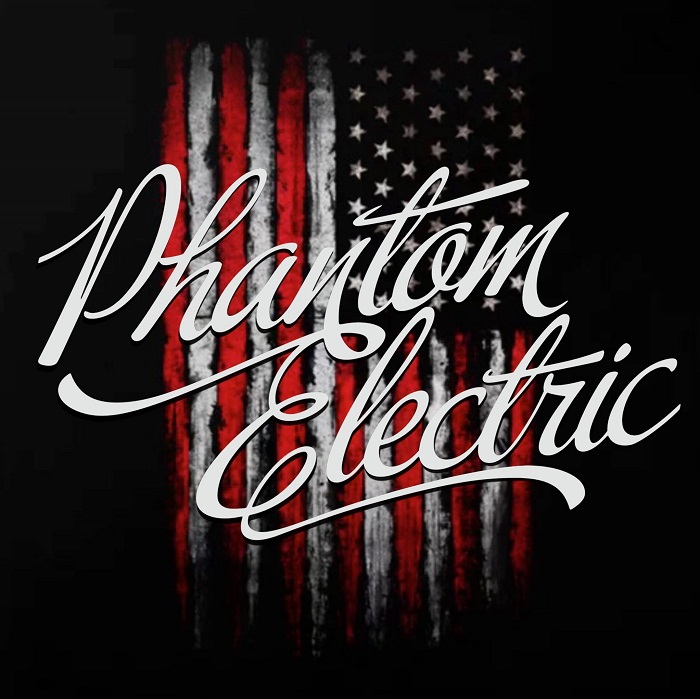 A new double side single from Phantom Electric has just dropped and it's insanely fulfilling alt rock with dark undertones and an edge that won't quit.

"Modern Culture" is a guitar bending, percussion slamming, rock song with a digital undertone to it that peaks through and gives it a slightly haunting feel at times as vocals belt and the song wails with an aggression that just peeks through enough to crawl under your skin in all the best ways.

The song blends bands like Death From Above 1979 with NIN and more as it surprises you with a fiery and excited soundscape.

These guys know how to put a song together that reflects how they feel and still have it come through with a bright production that helps create their own heavy pulsing swagger.

The B-side is called "Lie" and it keeps to the bands slightly fuzz oriented hard rock sound but has more of an upswing radio sound to it that becomes quickly addictive.

The band's staple glitching atmosphere is still there but this one is more of a sing along and feels like a crew of people with fists in the air belting the chorus along.

With a powerful alternative release like this, we wanted to talk with the band about what started all of this for them and more.

TSWS: Okay let's start off with "Modern Culture".  This track has a major alternative anthemic style to it. Where did the song come from?

“Modern Culture,” Is a revival of two older demos. We were working through our catalogue in the studio searching for some magic. The lyrics felt socially relevant to the times, and we felt that the sound stylistically had good potential; like a type of rock sound that you don’t hear often - sometimes you just want a kickass catchy rock song to crank up and cruise to. So we freshened up some of the riffs and lyrics for this newer version that we released. I felt like it was the right time to release these songs, because the lyrics are arguably controversial as there are references to socio-political structures, social policing of people’s opinions and ideas, mob lynchings, individualism, collectivism, American culture and politics etc. For me rock has kind of has a historic duty to, at times, be controversial, risky, and uncensored, avant-guarde; and I felt it was appropriate given the socio-political climate in the US. The lyrics in these songs are really trying to question the public and political narratives in our society and how the public reacts to those narratives; and more specifically how well intentioned people can really become quite malicious and justify it in the name of wherever they derive their moral center, which doesn’t have to be a religion. And on top of that, how people are often blinded by their own chosen truth; and at the same time reject reason and an open-mind to justify their beliefs and behavior. Traditional one might think this kind of behavior is exclusive to religious radicals, but that doesn’t seem to be the case these days - anyone can be radicalized, and “Modern Culture” is kind of a warning to we the people, that we need to really question the narratives being forced on us from the political and media machines and realize that our neighbors our not our enemies. A little look into history tells us that power structures often turn people against each other, left to right, to avoid a bottom to top confrontation, revolution, etc. So be cool, be kind, be the positive change you wish to see in the world.

TSWS: The song comes with a B-Side called "Lie" and between the two we can hear some different rock approaches in there. Who are your biggest musical influences?

We have a lot of musical influences from beatnik era jazz to modern pop, often that finding inspiration from genres outside the sound of song we’re working through; it keeps things fresh. But we obviously carry a lot of influence from rock in general; and for “Modern Culture” and “Lie” it really comes from the feel of bands like Black Rebel Motorcycle Cub, Nine Inch Nails, Queens of the Stone Age, Rage Against the Machine - that super riffy dark alternative rock. We’ve always enjoyed having fun with those types of sounds and songs.

Phantom Electric, my buddy Sean Michelsen (Reptile Room, Cadillac Blue) came up with the name together. The name was a potential replacement name for a band we were in at the time called Alchemy. The name never got switched out so I used Phantom Electric as the project name to catalogue a handful of demos. From there the catalogue evolved, life changed and projects ended; a couple friends including our producer and collaborator Kristofer Sampson really like the name Phantom Electric and kept encouraging me to put a new band together and start releasing some of the music I had been working on. And so with the encouragement of some great friends, I put together a recording session for our first release, “Friends,” which was recorded live on the fly. We were so happy with the way it turned out and the feedback we got that we decided to keep pushing forward.

Experiences, and down time. Experiences give something to draw from, and its often the reflection of those experiences and life observations cultivates the truth that comes through in our songs. For me personally, there’s got be some depth somewhere to draw from. We’ve also found that making time to jam with friends also produces good ideas and a youthful attitude that can help spawn great songs. Sometimes it feels like some of the best material comes from really quiet down time when the mind is quiet and there is no thinking involved and no one around, an environment in which hard truths reveal themselves.

Not often, mostly getting together for fellowship, song writing, and studio time. We're a song writing oriented group of friends across a small pack of bands. Everyone cross pollinates, producing and writing songs with each other - the all for one and one for all in a way. So I guess you can say we don’t really fit the traditional mold of the a typical band. I think we’ve discovered that the love and encouragement we share amongst each other is what we value the most, almost like a social self therapy.

Probably, everyone here in Atlanta is ready for live music again. Live shows are one of the few things that haven't come back yet; though everyone is certainly ready to go to a show, the social watering hole haha. It's hard to speculate what the world will be like and when, so we are getting creative within our scene leaning into videos, collaborations, quality content that can keep the energy and visibility up.

More music. We have a bit of a back catalogue, and we're looking forward to rolling out more music through the rest of the upcoming year.

Anderson Paak, Chiiild, a variety of classic Funk, and a little classical salsa, jazz, oldies from time to time. We have a deep appreciation for a variety of sounds. Though our latest release, Modern Culture, is comparatively heavy to some of our other music. We often find great inspiration from genres outside the realm of whatever we're working on.

Living... haha. It's usually work or music for me. Used to live the starving artist lifestyle. Over time I developed a curiosity for developing ways to get out of the system, so got into real estate, investing; stopped working for other people and started working with other people. And in that building financial self reliance and independence. Learn money, learn how the world really works. The truth isn't popular, and isn't always easy to find.
TSWS: Before we go, what would you like to say to fans of the music?

Take the red pill. Talk to your neighbors. Smile at strangers. Be open and kind and listen to people. Be the love.