An Interview With Province 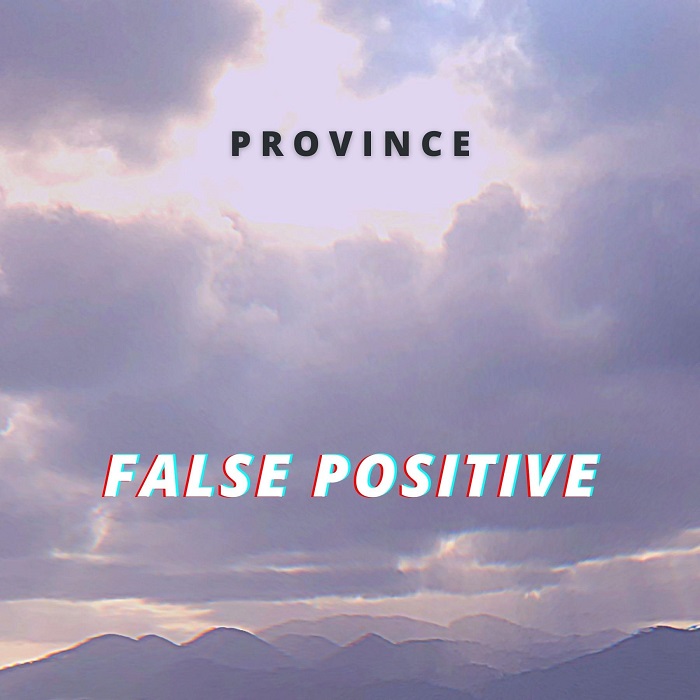 A brand new EP premier from Province gives off a gorgeous array of electronic textures as it blends elements of dance, synthwave, and euro-pop together to create something bright and vibrant.

The False Positive EP is packed with color and life, ambient vocals, and a refreshing bout of keys and synths that all come together with elements of R&B.

Songs are deepening and can get soulful and soothing as sounds swim around you and wash you away.

This is a personal record that delves into experiences in a dream like way at times.

Classic beats and danceable rhtyms blend with digital sheens that coat the music and get you moving and thinking as well.

This EP has layers to be peeled back and with each new track there is something a bit different to bring to the table all with a tasteful production style that becomes a staple sound of the record as it plays on.

With a delightful soundscape, the record builds its own atmosphere and takes over with an in depth and unique look into the artist's point of view.

One of the best things about the EP is that it feels alive and breathing as songs swell and sway.

With such a powerful release, we wanted to have a chat with Province to find out where exactly all of this came from and what's next for the artist.

TSWS: Okay let's start off with the False Positive EP. This record has a blend of ambient tones and electro synth work with dance mixed in. Where did this EP come from?

I had just come out of a multi-year relationship that had turned poisonous, and as usually happens with these situations, you have to keep yourself busy to avoid venturing to dark places. For me creativity is an effective way to channel my energy into a positive outlet. I've been making music for a long time but this EP is the first time I have stepped into the pop realm. Musically I wanted to stay true to a style that felt natural and was something I would personally gravitate towards, while also telling personal stories that I feel might resonate with others who have been in similar positions. I've never had a crack at singing before and frankly have no idea what I'm doing so originally the idea was to take a set of great pop songs I had written and find some accomplished vocalists to do justice to them, but ultimately I figured it would be more authentic if I were the one to tell the stories. It's an approach that fits with my tendency to do everything myself.

TSWS: I'm hearing some awesome styles on this album. Who are some of your actual biggest musical influences?

While I was making the EP I had been taking in as much pop as possible just to soak in all the melodies and structures. In terms of creative pursuits, the approach I take is similar to method acting; just diving really deeply into the world I'm trying to encapsulate to the point that it becomes my own life during the process. In this case there was a lot of stuff that wouldn't be immediately apparent as reference points for the music itself, but is imbued with the same sense of putting melody and emotion above all else. I had a playlist with Foster the People - Helena Beat, Halsey - Without Me, The Horrors - Something To Remember Me By, Adrian Lux - Teenage Crime, The Presets - This Boy's In Love, Beck - Colors, Araabmuzik - Lost in a Maze, Supergrass - Moving, Ladia - Leave Me Stranded, Mariya Takeuchi - Plastic Love, Tame Impala - New Person, Same Old Mistakes, Last Dinosaurs - Take Your Time, Alexis Jordan - Happiness, Kane Strang - My Smile Is Extinct, Washed Out - You'll See It, Alvvays - In Undertow and Grimes - Violence and pretty much listened to it on loop for about 3 months straight to mainline melody into my bloodstream.

I started producing music when I was around 13 as a young rascal hijacking Yamaha keyboards in school music classes and laying down 180bpm freestyle raps over the 'Disco Trop' presets. I then began to move towards IDM type stuff and made a fair few Aphex-style tracks before releasing my first record as Angular at 18, which was inspired by my vision of what traditional dubstep could have become in a parallel reality. I made a lot of records under that project spanning deep house, jungle, techno and speed garage and also produced a hip hop record with a couple of mates as Gutta Boys. The Province project was born as a woozy, languid, ambient take on house, placed somewhere between 'Untrue'-era Burial, 'House of Balloons', early Mssingno and White Ring/'witch house' in terms of sonic palettes. I made two full-length records in that style but 'False Positive' represents a totally new direction and is much more pop-oriented than anything I've done previously.

I've written a few more Province tracks that I will put together over the next few months in readiness for another release, but for now I'm just going to see how far 'False Positive' can go and take things as they come. I'm looking to improve my recording setup and broaden my technical knowledge of vocal recording for more polished results moving forward. I feel my best work is definitely yet to come, though I suppose the point at which you stop feeling that is probably the point you should move towards a different pursuit.

I never stop. For me it's usually boxing first thing in the morning, then by day I work for a bank, and by night it's either making music, writing, cooking or learning languages. I've got a novel, 'Love In Bright Landscapes', coming out later in the year so that's been my other major creative project.

TSWS: This EP feels like a lot went into it!! Any advice you have for other up and coming artists out there?

The EP was made during the small hours over the first few months of the year in order to accommodate a full-time work schedule so there definitely was a lot that went into it. Credit has to go to Kathy Naunton at dB Mastering as well; it's the first time I've recorded anything approaching conventional pop vocals so I was pretty much clueless in terms of the technical aspects of that - as well as working with an extremely rudimentary recording setup - and she was able to provide a lot of helpful advice and massage the songs to a decent standard. I'm certainly under no illusions about being in a position to advise other artists but my general advice would be simply to back yourself. If you have a vision that you believe has merit, I feel you should stop at nothing to see it through to fruition because we only get one shot at this and I can't see the point in living with regrets and unrealised ambitions. Even a project that doesn't hit the heights you might have envisaged still represents more of a success than a dormant 'what if'.

If that's what the people want, then I'm sure I can make it happen.

TSWS: How do you write your songs? Is it production or lyrics first? How does it work for you?

As far as this EP was concerned, it started when I made the beat for 'Sunrays'. I had been listening to a lot of hip-hop at the time and just started making an instrumental one night vaguely in that vein. Later on the same night I decided to try something I could imagine hearing in the club, which turned into the instrumental for 'Canyons'. A few nights later I listened back and realised there were pop songs buried in there so I basically wrote the lyrics on the spot for both based on the feel of each beat and what was going through my head at the time. I've always been of the belief that good pop music has a sense of immediacy and that the spark is best captured when you adopt the same approach to the writing process. Ideas will spring forth when they are ready to; they don't need to be forced.

I think I'm probably similar to most creatively oriented people in that I gravitate towards creative pursuits when I'm in a rut. There's something quite therapeutic about being able to channel your energies into a project that is to all intents and purposes entirely detached from the daily grind. It's a form of escapism and the fulfilment that comes from completing a project that represents a part of you can't be underestimated. In terms of writing lyrics, it's a quick and instinctual process because I find that's the most effective way to get a result that is direct, catchy and memorable. I do that out of necessity because otherwise I start to gravitate towards being overly literary and verbose, which doesn't work with the tracks I'm making.

In an era where we are inundated with a barely comprehensible abundance of content, the concept of spending time to digest a record feels almost antiquated at times, but there is a certain magic about that experience. I have a genuine appreciation for anyone who chooses to devote their time to 'False Positive' because I know just how many things are vying for their attention at any given point. It's always special to be able to create something that connects with people, whether it's just nodding your head or singing along to a catchy tune or really feeling like a certain message resonates with you on a personal level, and I hope I have achieved that here.