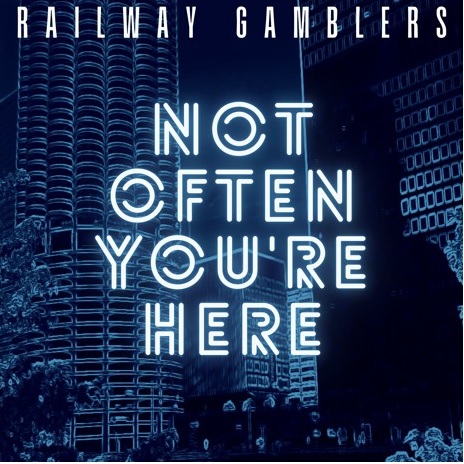 A new album release from Railway Gamblers gives off a genuine classic rock soundscape and feel with touches of southern rock just beneath the surface of anthemic choruses and warming presence and songwriting that becomes not only quickly addicting but also a little nostalgic at times.

The Not Often You're Here album is filled with these gorgeous tones and moving sentiments that feel cinematic and driving with just the right edginess and classic guitar sections and performances that feel like radio rock singles all the way through.

You get an array of lush instrumentation that beckons Americana and these massive and vast songs that feel like you've been listening to them on the radio for years now. They are welcoming  and have something about them that feels like magic.

The record feels like remembering. Like memories popping into your head from sound or scents, the record hits those sweet spots and calls out with passion to those inner thoughts and feelings that come with those memories.,

It's quite a beautiful thing really.

You don't always get this level of realness from a record but these guys pull it off with almost every single track.

There are tons of killer guitar hooks and some solos that als add to that anthemic feel and make you feel like you can get up and do anything half the time.

They come off inspirational and beckon artists like Springsteen and Dylan. Those tonalites are there and the influences come through with a shining force.

You also get such a live performance sense going on. Like these guys would be intense to see live. An arena rock vibe exists on the record and just when it gets ultra powerful, you get ballads and songs that have cinematic and personal approaches.

This is an incredibly gracefully performed record and it's as if the players are just feeding off of each other's energies the whole time. Which becomes infectious and fulfilling in a way.

You get this sense of sunset on a summer day. It's peaceful and fun, danceable, and rocking, it's something you can sing along to and listen with headphones or crank loud in the car.

It's got everything a solid rock record should have and more.

This was wonderfully woven and the songs were written with attention to detail but never lose their energy and that live rock feel.

Any true classic or southern rock fans will fall for this record in a heartbeat.