An Interview With Robin Shaw 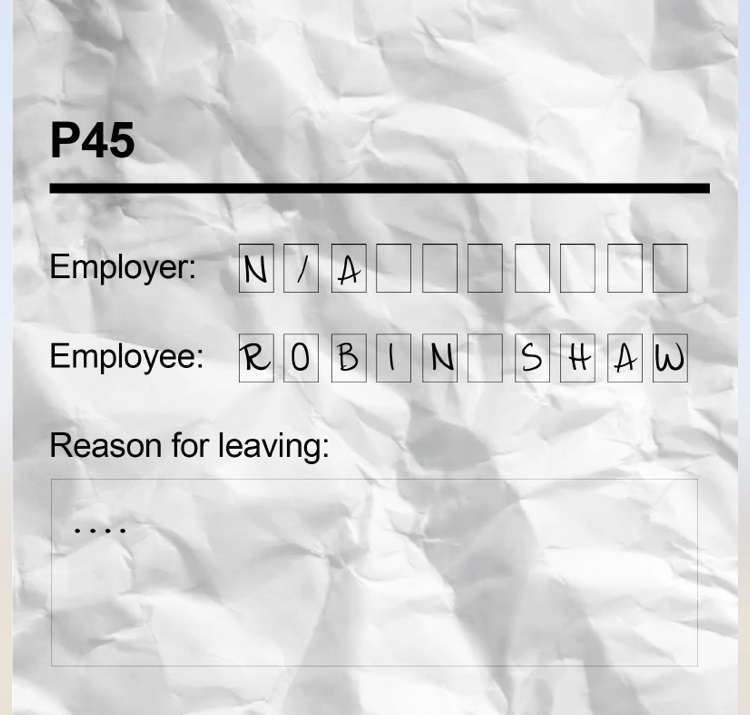 Robin Shaw recently released an insanely catchy pop banger called "P45" and it's got more hooks than you can handle.

The track is bursting with color, vibrancy, and honesty incorporating a pop beat, bringing it together with an R&B tone and sprinkling in sound effects and guitars to really add more flavor. And this song has loads of flavor.

Descriptive and straight forward words get descriptive and the song's message is a portrayal of the rat race we can all get stuck in. Times of struggle are tough to deal with and it's outstanding that Shaw put such an existential subject into such a lively pop song.

This track is absolutely fun, danceable, and incredibly radio friendly to boot. You will be singing along after the first chorus and it can get stuck  in your brain for hours after.

This is a great testimony to today's youth in songwriters and how  given the right situation, they can write a radio song as good as any other with what they have in front of them.

With such a great single, we wanted to have a sit down with Shaw and talk about where this track came from and what's coming next for the artist.

TSWS: Okay so let's start with "P45". This track has a very radio pop style that fuses in R&B and more. Where did this song come from?

Robin: The song comes from the frustrations of employment and unemployment and the knockbacks we can get with interviews etc. It took 2 years in all to write, record and master all together. It was so much fun to record in SoHo ‘ Regent Street Artists’ in London. The guitar sound at the start of the song was actually inspired by the start of Eminem ‘Lose Yourself’. The song allowed me to introduce other ‘characters’ and add more layers which was a new aspect for me.

TSWS: "P45" has a bit of a different vibe than some of your other songs like "Fight or Flight". What artists  or bands really influenced you?

Robin: I am inspired by a range of artists. I think wordplay is always key for me and is probably the most influential part to my music. Some artists and bands I’m inspired by include Professor Green, Post Malone, The chainsmokers, The Streets, James Bay, Eminem and more. I’m not one to box genres, if you enjoy music whatever style it is and you feel connected to it, that’s all that matters. I listen to more hip/hop and indie-pop music more. ‘Fight or Flight’ was done in 3 hours recording sessions, then when Ironik got involved it certainly boosted my streaming and Spotify which has now reached over 100,000 streams.

Robin: I actually started off competing in hip/hop streetdance talent shows. This certainly helped me develop confidence on stage and deal with being infront of the crowds. I also experienced some rejection as well which is really key in developing as an artist as rejection and learning is an important part of the process. I always was fascinated and passionate with writing and studied English Literature for A-Levels. I continued to Write poems and stories in my spare time. It was age 23, when I attended an audition at a music studios in SoHo where it properly started. I passed and have been working with the same producer Chris Hall ever since. Chris has becomeA great mate of mine and has helped me hugely in my musical career.

Robin: I’ve currently registered my songs with a licensing company called Sentric Music as I really want to try and crack the licensing/film aspect toMusic. I would love to have my music used in some commercial way. In terms of music, I have two new tracks which are still in recording process to be released when completed some time this year. The Songs are called ‘Jack the Lad’ and ‘Today’s Generation’. I also have around a dozen new tracks written out, ready to get back recording with my producer when the allowed to do so.

Robin: I love performing live and certainly miss it. My last performance live was in September in a smallBar in Hackney. I also managed to achieve a small dream of singing live in HMV last year before the pandemic as ‘P45’ is now being sold as a CD on their shelves in my local hmv store in Norwich which was a dream come true.

Robin: I try to write with imagery and as much story telling as possible. I write about things I’ve experienced ranging from subjects such as Adversity, love, friendships, employment, family, opportunities. I think it’s key to try and bring relatability to my music and writing. If you can make a song that people can imagine and interpret their own life into, that’s the best compliment you can receive.

Robin: Other things in life I Enjoy is walking my husky dog shadow. I play table tennis for a local village team and love that. I go to my local gym 3/4 times a week. Both physical and mental health is something I believe is important for self esteem and confidence. I love spending time with my family and close friends. All these things I can’t wait to do again, when the pandemic passes. I’m also a keen Norwich city football supporter :)

TSWS: You've been really doing well in the past year with the music. What sort of advice would you give to other up and coming artists out there?

Robin:  My main advice for up and coming artists is toBelieve in yourself and stay persistent. Things take time, I’ve still got a lot to learn but the small achievements I’ve managed to accomplish have been because I’ve practiced, worked hard and just kept pushing on. I’ve had many rejections and many ‘No’s but you will get yes’s and when they come, it can help you to the next stepping stone. Believe in your work and work on it.

Robin:  I wouldn’t say this person is a new artist but I’ve been enjoying listening to the pop star Lauv a lot over the last year or two.

Robin: A massive thank you to any individual person who has either downloaded, played, liked or followed my music. It doesn’t go unoticed and the support means a lot. Also a big thanks to radio stations, playlists and publishers like yourself who have given me the boost and confidence.