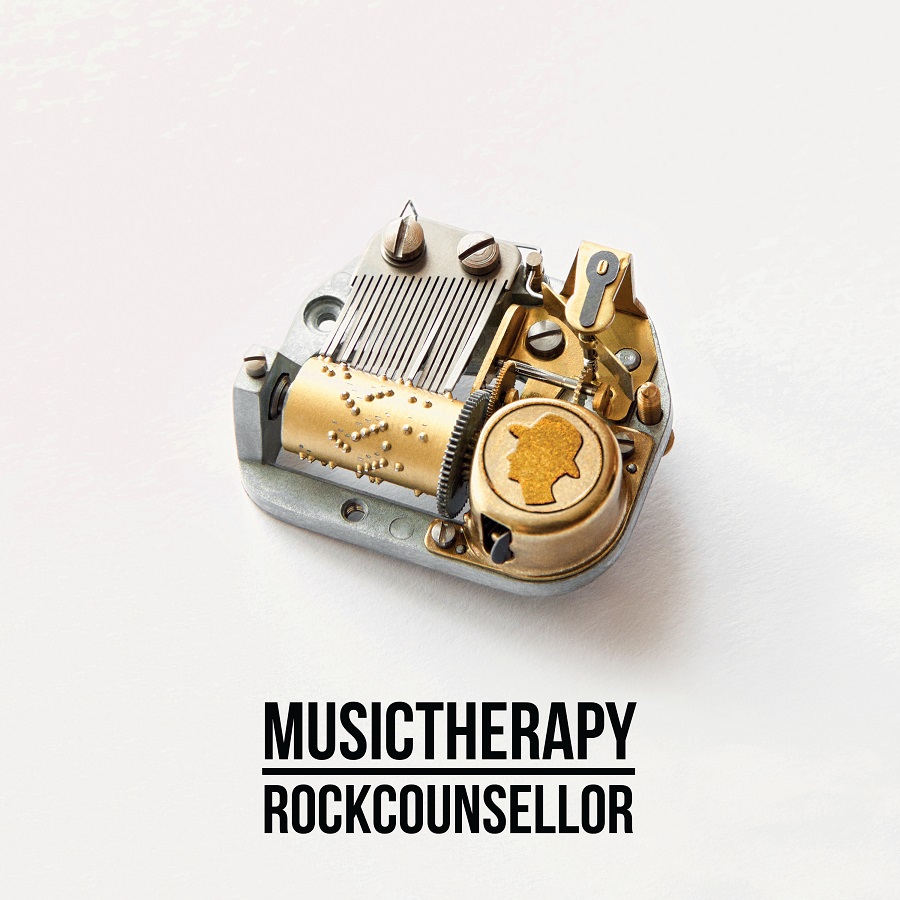 The brand new full length album from RockCounsellor hits that classic retro pop rock on the head with funk bass lines, bendy guitars, horns, and a heavy energy that brings an ultra vibrant style to the songs.

The Music Therapy album is oozing with fun and inventive guitar sounds, tones, and hooks that touch on harder rock and show a songwriting concept that has no walls built around it.

The songs are all incredibly poppy and most are danceable and even boast some alternative edge.

The record doesn't let up as song after song seems to get better and better, and introduce a new and additional form of pop.

You can hear a ton of classic rock influence especially in the guitar work while tasteful solos are scattered throughout the records play through.

The album gets descriptive and paints pictures well while vocals never lose gusto or life.

This record has a ton of heart and positivity flowing through its veins.

Either way, Music Therapy is endlessly addicting and alive.

With such a wondrous release, we had a chat with RockCounsellor to find out how this all came about.

TSWS: Okay let's start with the MusicTherapy album. This record is packed with pop, rock, and at times even piano and synth driven songs. Where did this album come from?

RockCounsellor: Early in 2017 I got diagnosed with bladder cancer. Luckily, it was caught reasonably early so I didn't have to go through chemotherapy, but I was looking at three years of immunotherapy. That involved a series of invasive and pretty undignified procedures, so I was dreading those and pretty daunted by the thought of that long journey.

Some years before my diagnosis, in 2012, after watching Paul McCartney play ‘Hey Jude’ at the opening ceremony of the London Olympics, I’d started teaching myself to play rock piano. Guitar had been my only songwriting tool before this so I was really keen to do something with a bunch of songs that I had been arranging on the piano with my drum machine. That something made sense to be taking them into a recording studio, as that would also serve as a little music therapy to cope with my dread and to distract me from thinking about my treatment.

TSWS: Did you collaborate with people on this record? Did it come out how you wanted?

RockCounsellor: Yes. So I had recorded with Richard Campbell at Orpheus Studio in London with other bands I had been in, and I liked him and the way he worked, a lot. He also offered to play bass and drums for me, and knowing what a brilliant musician he was, I jumped at this offer.

As the recording process went on Richard played more than those two instruments. He plays guitar and piano way more skillfully than me for starters, so if there is ever anything I want to hear but I can’t play very well or at all, Richard is alway happy to play it for me. He’s also brilliant at orchestral arrangements, so if I bring in a strings line that I have come up with on the piano, he is able to turn it into a small orchestra. I’d be crazy not to make use of his talent as a producer and musical arranger. So the process these days when we record is wonderfully collaborative, although I bring in the song written on the piano or guitar and an idea of the musical direction I want it to go in, we both then work together to make the best version of it production terms. We also share a love of classic 80s pop and rock, so we have a lot of fun with that. I think that’s pretty clear on the album!

In answer to your second question: yes, the album came out way better than I dreamed it would. It’s broader stylistically than I expected, which reflects the breadth of my pop and rock tastes. That’s in part because when I realised the options available to me in terms of Richard’s musicianship and his studio, I wanted to take full advantage of this.

RockCounsellor: If you're asking me about how I became a songwriter and musician, it’s a long story. The abridged version is that it began when a bunch of friends and I started a punk band called the Playschool Barmy Army. We were about 13. This was before we could play real instruments. We all played cardboard guitars instead, and vocalised the music. It was a cappella punk, I suppose. Needless to say it didn't last long, and we went electric as soon as we could play three chords.

During my teens I went from being into punk and new wave to being into new romantic music and then classic rock, before discovering the likes of the Pixies and Faith No More in my early 20s. This led to a grunge phase, which was when my band at the time got signed to Southern Records (Therapy?, Babes in Toyland and Silverfish). We released three vinyl singles with them, and got reviewed in the music papers, played support gigs with the likes of Jesus Lizard, Shellac and Girls against Boys, and recorded a session for Radio One. That was a lot of fun, but for various reasons that chapter ended in the mid-to-late 90s, and although I’ve played live and recorded with various musicians and bands after that, I think I’ve regarded myself as predominantly a singer and songwriter since then.

TSWS: What kind of bands and artists really influence you?

RockCounsellor: The desire to make music came from listening to punk in my early teens. The first punk song I remember hearing was ‘Oh, Bondage Up Yours!’ by X-Ray Spex. Back then, though, I would never have admitted to liking Supertramp, 10cc and ELO. I think looking back it was these bands that would have given me my love of a good pop melody. I was also a big Doors fan as a kid, and Jim Morrison was a big influence on me and my lyric writing as a school boy. That didn’t always turn out so well - singing about lizards and galleons and stuff -  but I still love the Doors. My love of synth-rock came from the new romantics and Roxy Music. Fugazi, Pavement and Nirvana were a big influence on me in the 90s before BritPop when I started listening to a lot more dance music, especially something they called French Disco. These days I still enjoy contemporary music. Among my favourites at the moment are Everything Everything, Idles, BC Camplight and King Gizzard.

RockCounsellor: I’m a husband and a dad, and I work as a psychotherapist and addiction counsellor, hence the RockCounsellor nom de plume. I don’t have the energy or time that I once did for hobbies other than music making now that I have a proper job - I used to draw and paint a lot  - so these days I mostly just watch TV out when I get home from work. But I do like to stay fit, and I run and cycle a fair bit.

TSWS: This album seems like a big undertaking. What kind of advice do you have for other up and coming artists and bands trying to get heard out there?

RockCounsellor: Never give up. That’s what my grandmother used to say. Probably don’t self-finance a vinyl album when you’re relatively unknown, unless you are ready to make a financial loss on it. And as we all know very well, social media is key these days to finding success and getting heard. Get some good advice on that. Make sure you or at least one person in your band is on top of that. It’s a dirty job but someone’s gotta do it!

RockCounsellor: I’m gonna keep making music with Richard for the time being. It’s still lots of fun and I’ve got lots of songs I want to record and which I plan to release digitally one-by-one every three months or so. Then, hopefully, if I can afford to, I’ll stick them all on another vinyl album, as I have done with MusicTherapy.

TSWS: Might you be focusing on performing live when the time comes?

RockCounsellor: That’s a good question. I stopped playing my original material live a few years back, cos being an relatively unknown older musician makes it much harder to get a good turn-out at gigs. It becomes demoralising playing to half-empty rooms. What's more, I would need a band of Richards, and right now I only have one! We’ll see. I do miss playing my own songs live. As it happens, I do play in another band called 14 Carat Grapefruit, which is a lot of fun, so at some point, hopefully I’ll be able to do that. That helps get the performance thing out of my system.

RockCounsellor: My therapy work is more recently where I get a lot of my ideas for songs. The types of issues people bring. I’m fascinated by people - the way they think and behave and the reason they do - and I’m interested in how relationships work and don’t work. Many of the songs on MusicTherapy reflect this by using relationships to frame their topics. There’s songs on the album about cancer, vulnerability, drinking, greed, ageing, loss, and self-righteousness.