An Interview With Roger Zambrano 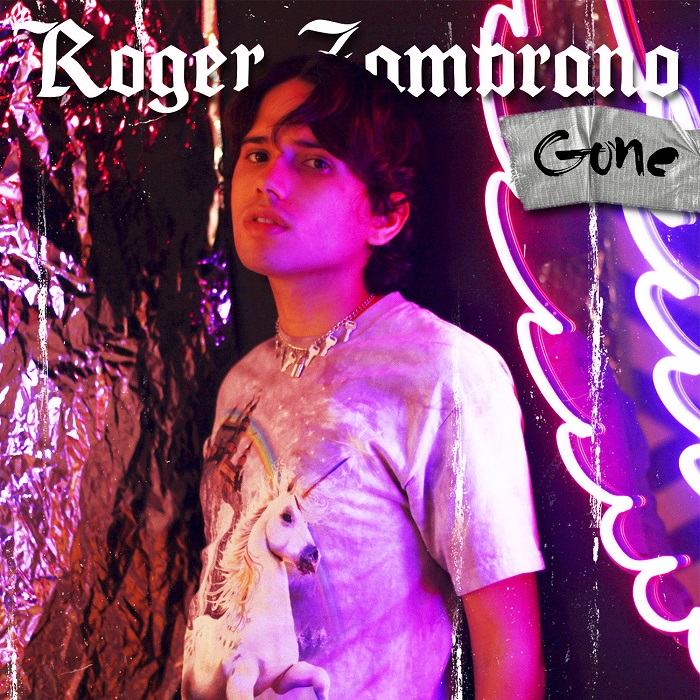 A new single from Roger Zambrano delivers a heavily cinematic pop ballad that bursts into driving ambient tones and a gorgeous palette of sounds.

"Gone" is a personal and heartfelt song and touches on retro-pop at times as layers of swelling sound and percussion swim around you and form into something anthemic.

The single features some outstanding songwriting and a vocal performance that shines with passion and the artist's ability to use his voice as an instrument.

Zambrano's singing comes through both angelic, and even haunting at times.

The song has some classic synth sounds and a dream-pop undertone that stays strong throughout its  course.

This was a wonderful and tasteful power pop piece that really shows a youthful artist's true colors and ability to write songs that are both catchy and moving at the same time.

You can really see this song in a scene of a film somewhere.

A very strong radio friendly song, Roger Zambrano is paving his way in the pop world and with "Gone", he's leaving a mark for sure.

With such a great release, we wanted to have a chat with the artist and talk about where this all started and where it may all be going.

TSWS: We want to start with "Gone". This song feels personal and comes through as a great pop ballad and grows into a cinematic style. Where did this song come from?

It is quite personal actually! I wrote it on a very late night after ''breaking up'' with this person that I dated for a few months, we didn't get to have a proper closure so the song helped with that a lot, it was quite therapeutical to write actually. I have to admit that I kinda exaggerated things in the song for the sake of the art, I wasn't as hurt as I sound, but I wanted to capture the disappointment of wasting months of your life after finding out that all the potential you saw on that person wasn't real, it was all an act. Also the contrasts between wanting to stay and expecting an apology, while fighting to find your worth again and move on with your life. The mood of the song kinda fluctuates from soft to strong trying to emulate the ups and downs that come with dealing with a heartbreak.

TSWS: For sure some great pop styles and influences on this track! Who are your actual biggest musical influences?

That's a great question! My music taste is so eclectic that I find this question hard to answer, In my teens for example I grew up with Ashlee Simpson, Avril Lavigne, Panic! at the disco, among many others, so now in my 30s I'm dragging inspiration from all of my teen idols for sure, not only in my sound but also in my whole aestehtic.

I always had a passion for singing, my first memories are a 4 yo me jumping on the bed, singing myself to sleep. Later on my childhood I started singing at church with my cousins. I went to a catholic high school so I kept singing there. Took me years to be confident enough to release my own stuff independently and put my music out there though.

I just released the video for ''Gone'' wich I'm quite proud of. In over a week I will be releasing my next single wich is a song in spanish called ''Agosto en Madrid'', so in the next few weeks I hope to keep promoting both songs and also to start working on the visuals for my new song in spanish. I will keep releasing singles for the rest of the year hopefully.

I live at a small town and there's not a lot to do here so I do travel whenever I get the chance. If I'm not traveling I'm probably  doing some photography or cooking at home with my dogs. (and thinking about what's next with my music for sure).

TSWS: This single feels like there was certainly a lot put into it. What  kind of advice would you have for other up and coming artists out there?

Just to put action into it, because no one else is gonna do it for you, also, manage your expectations when it comes to the support of the people you know, you might be getting way more support from strangers than from most of them! The whole process is gonna be quite eye opening for sure but also a nice way to filter people out of your life and to see who's actually there for you.

TSWS: What kind of things inspire you to write

?For now I've been writing about the heartbreaks I experienced in my 20s and my dating experiences from those years. I'm gonna be exploring that in my next releases for sure. I tend to romanticize and idealize everything so it's easy to me to get inspired and it makes my writing process quite easy and fluid.

These days I've been obssesed with Marina's latest album ''Ancient dreams in a modern land'', and a bunch of early 2000s classics of course.

Hopefully! For the rest of the year I'm gonna be focus on crafting my songs and getting a solid catalogue ready so I can hit the road next year. Can't wait to perform my songs live.

TSWS: Can we expect an EP or full album anytime?

Hopefully in the future but in the digital era that we're I believe that a body of work as an album is not quite needed, so for now I'm gonna keep releasing singles. Maybe at some point next year I will come up with a whole concept for an EP though, that would be very cool.

Stay passionate and vulnerable! Don't let the world change you.