An Interview With Shannon Clark & The Sugar 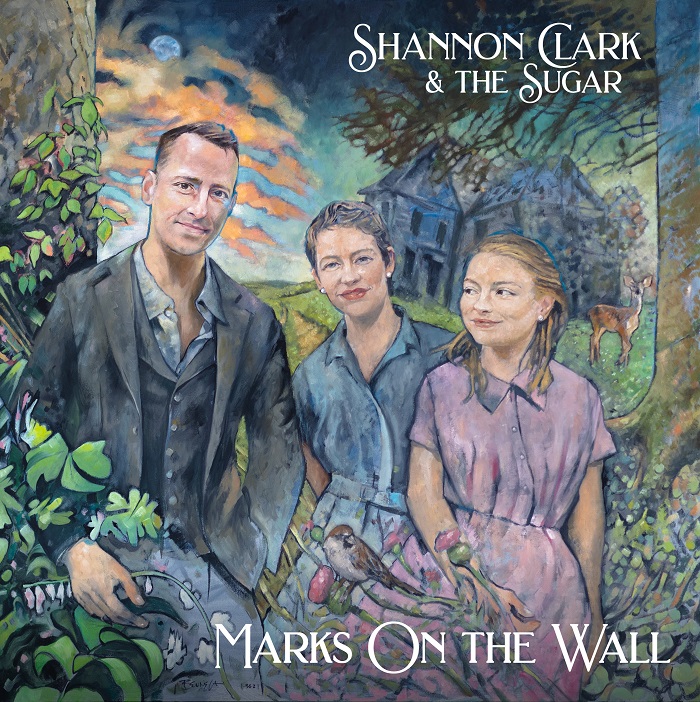 A new album from Shannon Clark & The Sugar puts forth a ton of soul in the form of smooth Americana with a contemporary style and a gorgeous array of instrumentation to go along with passionately performed vocals.

The Marks On The Wall record boasts a refreshing but familiar showcase of organs, harmonica, and a swirling southern sound that crawls under your skin in all the best ways.

The release feels cinematic and colorful as vocals swoon and the band sends you off into a massive soundscape that borders on dreaming from time to time.

These songs come from someplace real and the drive is emotional and honest which is a major part of why these songs work so damn well.

The guitars are lush and full, piano and organs flow throughout the album's course and there is heart pumping in the veins of the release.

Vocal harmonies are beautiful and compelling at times while the songs paint pictures and the record begins to feel like a concept album.

This album was clearly a big one for the band and we decided to have a chat with them in regards to how it all began and where it's going.

TSWS: Okay let's start with the Marks On The Wall album! This record has an eclectic feel with southern roots overtones of Americana but also plenty of pop infused! Where did this album come from?

Thank you!  This album came from Hope but ultimately came from a place of loss and perseverance.

TSWS: I'm certainly hearing several styles on this record. Who are some of your biggest musical influences?

Like all artists we have a huge range ,  being that we have varying ages it changes . I (Shannon) am a huge fan of artists like  Jason Isbell, Gary Clark Jr, John Lennon, Rodney Crowell, John Prine  the list is extensive, Brittany loves Mary Chapin Carpenter , Fleetwood Mac Brandy Carlile , Guy Clark, Navie loves Dolly Parton , Radiohead, Glen Hansard , and The Smiths .

My wife and I met playing music when we were very young ,  became friends and eventually fell in Love .  We had a family and sort of ended up here after years of playing and touring we finally decided if we were going to keep doing this we wanted it to be a family affair .

TSWS: What's next for the band? Any live performances upcoming?

We love to travel and take family vacations as well gardening, we love dogs and chickens .  Hiking and anything nature .  We also work together on our Food truck as well when we aren’t playing music .

TSWS: Can we expect any music videos coming from this record?

We put out a video for Red River and it’s on YouTube now as well as we will have one additional video in the fall .

TSWS: This album feels like it was quite the undertaking. Any advice you'd have for other up and coming bands out there?

Work on being inspired, and creative not so much on being perfect .

TSWS: What sort of things inspire you guys to write?

TSWS: How do you guys write your songs? Is it chords first or lyrics? It's different for everyone.

It varies , sometimes it’s just a poem or lyrics first and other times it’s a melody or guitar part first .

Okay so you all wake up in the middle of the night starving. What's your go-to midnight snack?  Shannon -milk, Brittany - chips , Navie -mushrooms (not the drugs lol )

TSWS: I feel like there is an almost film-like influence in the album. Is this true? Are you influenced by movies?

We are all huge movie buffs !!! So for sure , movies and music go together like white on rice !

TSWS: Is this a concept album? It sounds almost like it is.

Not intentionally , but the album was mostly written a lot about family and loss and perseverance, success and failure .  We come from a huge family and gives us a lot of material to work from and we love more than anything to write songs that are real, true and lived or directly inspired .

You are our biggest encouragement, when you listen to us , buy a record , or a shirt or come to a show , you will never know how much it keeps us going and helps us remember why we share our art and continue to create music.