An Interview With Shelby Snyder 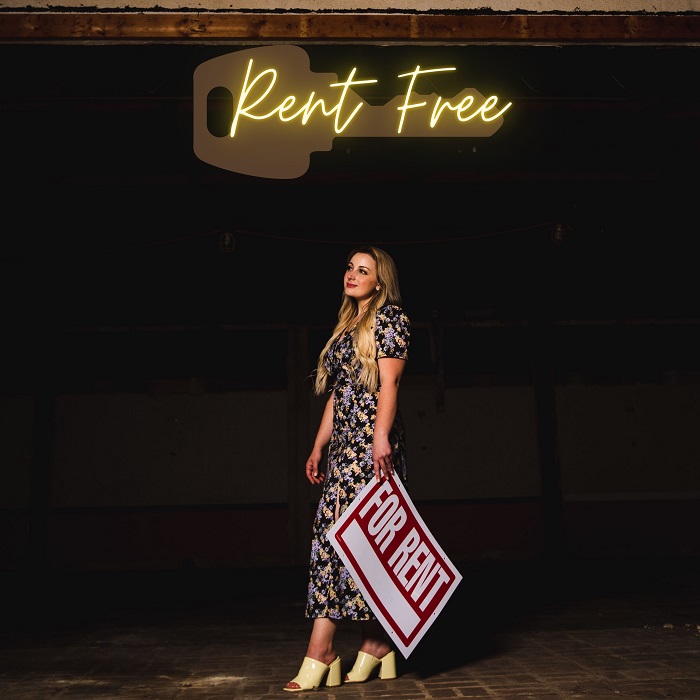 A debut release from Shelby Snyder paints vivid pictures with words and comes through with a powerful and cinematic tonality that sticks with you long after it's ended.

"Rent Free" is loaded with gorgeous textures composed of piano root notes that drive emotion, acoustic guitar, and musical swells and sways that flow around you and create a certain atmosphere.

Snyder performs with a major vocal passion and almost operatic at times, the drive and energy behind her singing is addictive right from the start.

This track has an intensity that has the ability to pull you in and let you just wash away with the sounds and it feels great to let it happen.

You can hear the gusto of a youthful songwriter utilizing her music to let out personal feelings and this is exactly what we need right now.

Music that tells stories and that people can relate to.

The song has a theatrical undertone and really has a graceful tough to it.

This being such a beautifully woven debut single from the artist, we wanted to sit down with her to have a chat about where this came from and if we can look forward to hearing more in the near future.

TSWS: Okay Shelby, let's start with "Rent Free". This track has a personal and freeing feeling to it and carries a cinematic tone. Where did this song come from?

Shelby: This song is definitely personal! I wrote this in a time of healing after heartbreak. Most things were going really well in my life, but I still couldn’t get that person and our memories out of my head. …and so in the middle of a lunch break during a long Zoom meeting, “Rent Free” wrote itself into existence!

TSWS: I'm hearing several styles musically and vocally on this track. Who are some of your actual biggest musical influences?

Shelby: I like to take a bunch of different elements from musical and vocal styles I love, and bring them together. Some of my biggest musical influences are Taylor Swift, Ingrid Michaelson, Shania Twain, and Fiona Apple. I spent my most of my life listening to show tunes too, so the great musical theatre composers have no doubt influenced me.

Shelby: It’s kind of crazy how the limitations of the pandemic brought songwriting into my life. I’m a musical theatre performer and I felt lost without my normal creative outlet. I’ve always written down random lyric ideas, but they stayed notes on my iPhone. One day when I was really struggling, I bought a ukulele and decided right then to begin writing full songs. I let myself explore and be messy for the first time in my life. I haven’t looked back since! It somehow feels like I’ve been doing this my whole life.

TSWS: With things getting better out there, will you be planning on live performances soon?

Shelby: I don’t have any scheduled at the moment, but I’m not one to say no to a performance, so stay tuned. I am performing in a different way this summer as Sherrie in the musical Rock of Ages though!

Shelby:  I’m writing constantly and working to be able to release more music in the upcoming months! I want to focus on developing my skills and sharing what I create.

Shelby: Ooh so much haha. I love JP Saxe’s new album “Dangerous Levels of Introspection,” American Dream” by Baby Queen, and Jensen McRae has a song on her EP called “Adam’s Ribs” that is my current obsession!

Shelby: Well usually I’m performing a different kind of music and acting onstage for theatre! I’m also finishing up my B. A. in English, so I spend a lot of time reading and writing papers. Poetry is a big focus of mine and that blurs over into songwriting at times. In my spare time I do a lot of yoga and I give my cat Tortellini plenty of cuddles!

TSWS: You're gaining followers fast on Spotify! Any advice you'd have for other up and coming artists out there?

Shelby:  I would say to focus on writing the songs that express what YOU want to say. There are so many overwhelming factors to consider, but at the end of the day, you should be happy with what you put out into the world. As cheesy as it sounds, be yourself and the people that resonate with you and your music will follow.

TSWS: You wake up in the middle of the night starving. What's your go-to midnight snal? (a question of character here)

Shelby: Tortilla chips are always nearby. My friends make fun of how much I eat them at this point.

TSWS: Will there be another single or an album coming this year?

Shelby: I’ll be making some exciting announcements on my social media soon….

Shelby: Having “fans” is still a very wild concept to me, but I would first say thank you! It is a dream come true to even have one person listen to the thoughts I put to chords. I hope that those who connect with my music know that they’re never alone in their feelings.  <3