An Interview With Slow Walk 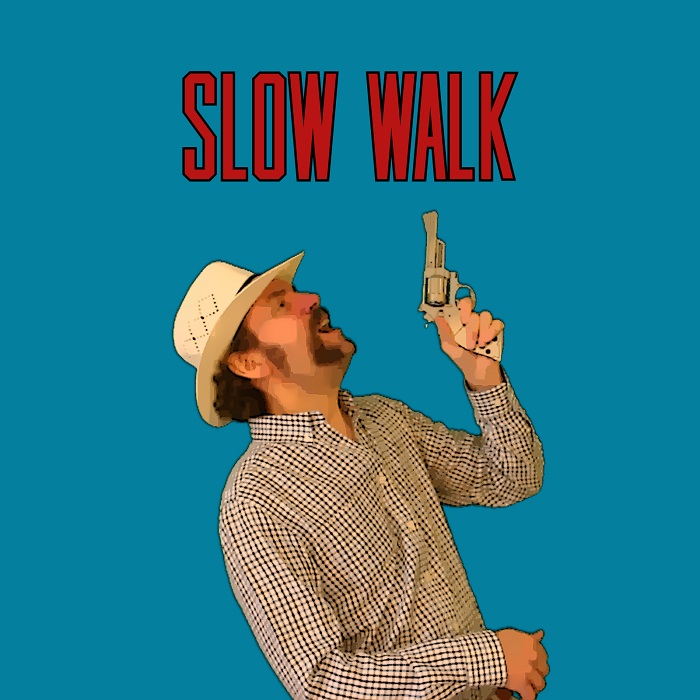 Slow Walk returns with an addictive alternative pop opus that builds and grabs hold with a unique energy and a classic rock undertone that hits hard with some raw guitar sections and a driving feel.

"Hangman" is incredibly fun and has a great edge to it that has become a staple part of the Slow Walk sound and we can't get enough of it.

This single is enough to get you up and dancing around your living room or have your kids jumping around the room and it's excitement is infectious.

The track has a swagger to it and a touch of alt rock undertones in its veins as the rhythm rocks on and vocals are performed with character and charm.

What's even better is the accompanying music video for the song as it's acted out wonderfully and keeps that fast paced fun moving forward.

A creative and message sending track and video both show the artists presence as an artist and how much he loves what he does.

With such a great release, we had to sit down with Slow Walk and a talk shop. Here's what happened.

TSWS: Okay so let's start with "Hangman". This song has a pop rock vibe to it and feels

very driving. Where did this track come from?

Hangman just sort of fell out one day. I was seeing a lot of cases of online witch hunts,

bullying and trolling and that’s where the idea came from. I am all for justice and people

paying the legal and social price for their crimes and being made to answer for them,

but the court of opinion scares me as sometimes we humans are prone to overreaction.

much like the wild west. This is where the wild wild web cowboy idea came from, this

idea of frontier justice and mob mentality. This also had a big effect on the style of the

music as I wanted the song to sound urgent, a bit like a galloping posse. I also put

certain sounds like harmonicas, a honky-tonk piano and some quirky Ennio Morricone

style percussion in to help set the scene and of course some rocking guitars.

TSWS: The video was awesome! Did it come out how you expected? Were you happy

Thank you so much. I co-directed it with the amazing Luke Galloway from Space Face

Films so I knew that would massively help. He also played the coat vlogger. My usual

collaborator Diortiz also helped out a lot. I’m really happy with the end result and it

and more epic. We started off making a few websites and in the end we made 7 and

some you only see for a few seconds hahaha. We also asked our friends for some extra

content and they gave us some amazing stuff. My brother who played the gamer came

up with the idea of unboxing a box of tissues haha. I asked another friend Paul Angear

to film a blog and he made a Wombling video, which I’d never heard of. If you don’t

know, Wombling is a real thing where people go hunting for free money off vouchers in

the car parks of big supermarkets. Diortiz came up with the very cool Western

Meditation and painting blog ideas which she acted in. Then of course all the awesome

people who did angry reaction videos that we scattered throughout the video. That’s

why there is so much going on all the time. We had so much to squeeze in but it’s great

to have so many of our friends and collaborators in there. It makes me smile when I

watch it so I think it worked out. Plus, I got to dress up as a cowboy and mess around

which is always fun.

TSWS: I'm hearing all sorts of rock influences and pop as well. What bands really

Ohhh, so many. When I was growing up my brother was really into Rock bands like

Guns N Rose, ACDC as well as New Wave bands like The Police and I think you can

really hear that influence in this song. When I was younger I was really into Britpop and

so bands like Supergrass, Pulp and Blur have always been a big influence too. I think

through my parents. The 80’s were also a massive influence and my parents introduced

collection. So, I think like a magpie I’ve stolen inspiration from everywhere. I also used

to love hunting around second-hand music and charity shops. I remember getting Ziggy

Stardust on tape when I was 16 and it blew my mind. David Bowie was another big

moderately sane ever since. Listening to artists like David Bowie, The Smiths and Pulp

made me realise that it was okay to not fit in and to follow your own path. That’s what

I’ve been trying to do since.

TSWS: Now that things are getting back to normal (slowly but surely) will you be

focusing on live performances at all?

miss it even more so I’m definitely hoping to get back out there.

It’s just me at the moment so I will keep knocking out the tunes and videos. I have a

new song called Drive coming out on May 7 th and this one has a bit of a different vibe.

You can definitely hear the Cure’s influence on this one. It’s the story of a man living his

autobiographical. I’m currently working on the video which is essentially more of me

having fun in front of a green screen. This one feels a bit more like the Sherlock Holmes

Would Know video and was definitely easier to make than Hangman hahaha. Plus, I’ve

got help from my awesome friend, musical collaborator and Photoshop legend Bean so

I work as a freelance editor when I can, which really helps with the music videos.

Outside of that, I watch a lot of films and TV shows. Too many. I am a bit of a film geek

and I studied film. I think this really had an effect on the music, hence making a cowboy

tune and a Sherlock Holmes story. Maybe next I should try a Romantic Comedy or a

super hero film. Probably anything but a musical.

I listen to Vinyl a fair bit these days and I’m a bit of a charity shop bargain hunter. I’m

listening a lot at the moment to a great Kenny Rogers album called Gideon, Canadian

Railroad Trilogy by Gordon Lightfoot, the Best Of Michael McDonald and one of my few

more recent full price vinyl albums, Other People’s Lives by Stats, which is an awesome

album. Other current bands I’ve been getting into are The Lathums and Colours Of One.

I love the new Black Midi tune and am excited for the album. I’ve been discovering a lot

TSWS:We loved your last release and also love where you are headed musically with

"Hangman". What sort of advice would you have for up and coming artists out

This is more creative advice than career advice, but try different things. Try not to go in

to making a song with an idea of the music or genre you want to make. Leave it free

enough to see what comes out. For me, that’s the exciting part. Try starting from

different places, a lyric, a beat, sample your electric razor, anything. Always embrace

the madness haha. Also let the music tell the story along with the lyrics. That way every

song feels like an adventure into a new world.

Thank you firstly for listening. It really means everything. I hope that when you listen to the

songs they make you smile, laugh, nod your head and throw yourself around the room a bit as

much as they do for me when they fall into my head and I record them. If they do, then they’ve

done their job and if not, I apologize and will try harder hahaha.