An Interview With The Agency... 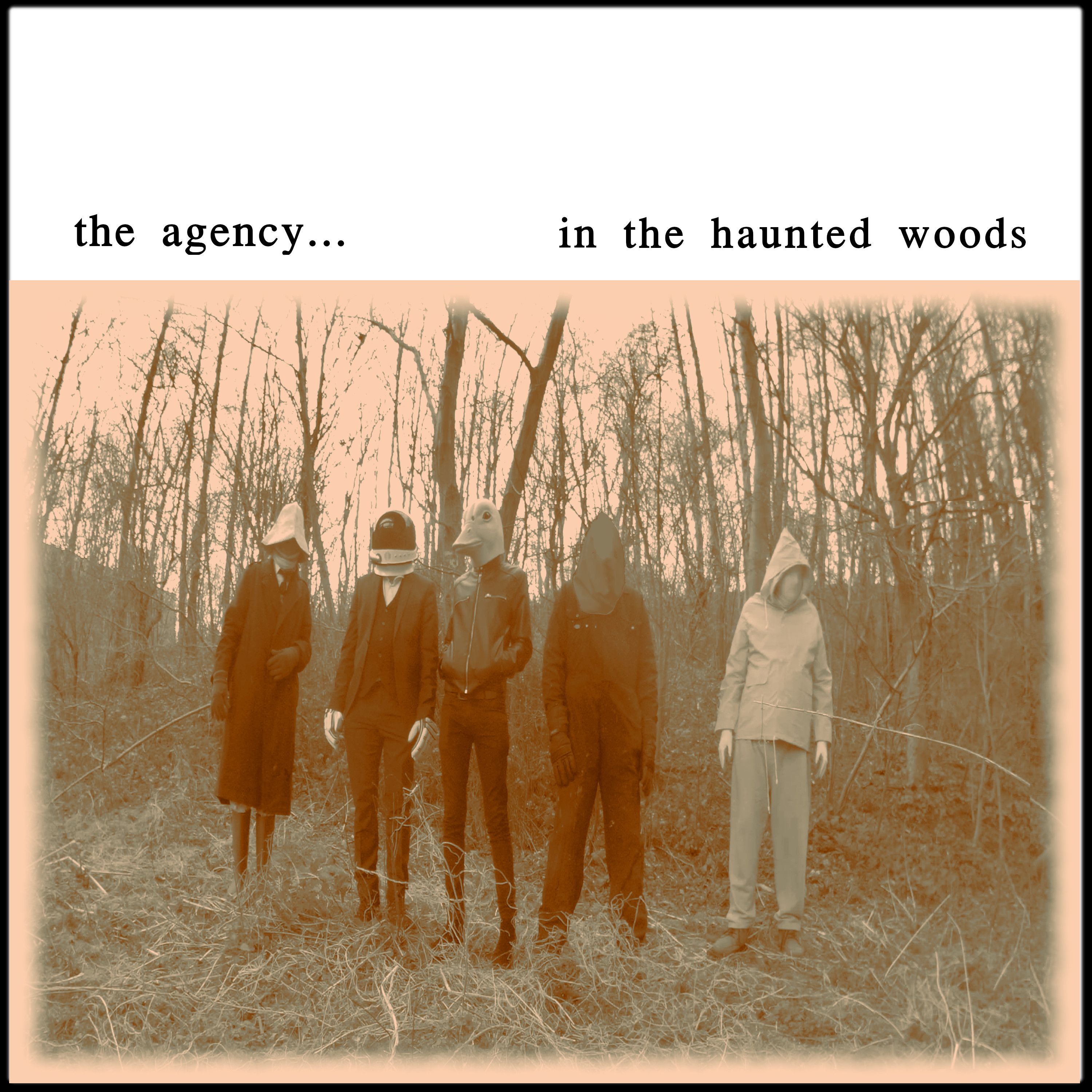 The latest album release from The Agency... dubbed In The Haunted Woods gives you that warm feeling you get listening to bands like Nick Cave & The Bad Seeds or Tom Waits.

Deep vocals and a dark undertone plays out super well with this record. As it unfolds it feels like you're listening to an old western concept album.

Touches of jazz and ambient rock fill the atmosphere and songs swell with intensity and whirlwinds of sound surround you.

Tremolo guitars and detailed storytelling creates somewhat of a different world as you listen on.

The Haunted Woods has a way of giving you the calm before the storm, and then the storm hits and you're thrashed.

The next track begins, and you get up and do it all again.

This is an absolutely astounding album to indulge in with headphones by yourself. Like a good film, the less interruptions the better. It's a massive piece of work to soak in but damn it's fun to do.

We wanted to sit down with The Agency... to find out where this came from. So that's what we did.

TSWS: Okay guys, let's start with In The Haunted Woods. This is a huge album and at times feels theatrical and ambient. Very cool genre bender of a record. Where did this come from?

The Agency...: Thank you. I like the term ‘genre bender’. It’s hard to say exactly where it comes from. Lyrically there is a lot of story-telling that maybe borrows from folk tradition. But sonically its even more ambiguous. We have such mixed influences and really want to explore them all and even try to get them all out on the same record. The other thing is that there’s four of us (Andy, Steven, Ben and me) that are the set line-up…but as a collective we can have as many as twelve on a recording or on the stage with us. We really try to encourage different people to leave their stamp. To create space for themselves on the songs. To start with I write the melody and lyrics but things bloom from there. It’s also taken us a long time to put this record together. We think its time that’s been well spent - to fuse all the layers of sound and introspection together that you hear on this album.

TSWS: Listening through the full album it almost feels like a concept record. Is that true?

The Agency...: We try to write albums around themes rather than concepts. So, ‘In the Haunted Woods’ is about being lost in all of its guises. In ‘To Fumble is Divine’ the narrator seems most literally lost, but the other tracks are more about feeling lost. There’s some pretty unscrupulous and misanthropic characters on the album, which is typical of our writing. I think one of the reasons people often feel lost is because they don’t take responsibility for themselves and their actions. ‘Affluent’ is a good example where the narrator seems to blame everyone but himself for the loss of one love while treating another in a pretty despicable manner. Sometimes people can’t see what’s in front of them. ‘Numb’ is the story of a banker going on the run, our ,mini-epic, and ‘Poor Robin’ is about a guy getting caught up in the middle of a political conspiracy. It tends not to end well for the characters on this album. That’s especially true of the last song ‘Two Strangers’ where an entire village is lead astray…it’s a meditation on human fallibility and mob mentality. Fitting given the current political landscape…

TSWS: You guys have been releasing music professionally since 2013 and have accomplished things most indie bands would love to. Is there any advice you'd give to aspiring bands or artists trying to get heard out there?

The Agency...: Well, we’ve listened to a lot of ‘industry advice’ over the last seven years, but have tended not to follow it. The old cliché about being true to yourself is really important. If you’re told to only write pop songs that last three minutes thirty seconds and to release as many tracks as you can to feed Spotify algorithms ignore it, unless you don’t really care about your art. Steve Lamacq just chose to play the track ‘Numb’ off ‘In the Haunted Woods’, which is a six-minute epic – if its good enough the music finds its reach. Also, consider that there is no easy money and that the whole shebang requires a lot of hard work. We always get PR type stuff ‘wrong’…it’s important to keep ‘stirring the pot’ with contacts and letting them know you’re there. We kind of disappeared while we wrote and recorded this album and are just super grateful that people seem to have picked back up from where they left off with us.

The Agency...: We’ve all been in different bands for years before the Agency… Me and Steve were in our first band together as teenagers. We’re also of different generations…so I guess it started at different times to. The Agency… was actually an accident. I was working on songs for what I thought was a solo collection and got Andy, Garry (currently residing in Berlin) and Steve to help. Then it became apparent it wasn’t really a solo record but something more. I only started writing songs after I asked Garry to write with me. He said he wouldn’t write with me, but he would play if I wrote the songs. It was a bit of a challenge. By the time the second album, ‘Of Ghosts’ came around I was writing for a band and for ‘In the Haunted Woods’ we really seem to have found our sound. Hence, some pretty sonically different songs now sound like they belong to a collection.

TSWS: Did you used to play live? Will you get back to that when the time comes?

The Agency...: Yeah, we love to play a bustling live show and we were really looking forward to the album launch gig. We did a tour and played festivals in the summer after we released ‘Of Ghosts’. We’re planning to do something similar again to celebrate ‘In the Haunted Woods’. Obviously, the world is a bit changed at the moment, and all that is delayed for now – so we’re biding our time but plan to get back out there as soon as we can. In the meantime, its been livestreams on facebook and mosaic videos.

TSWS:  So, there are a bunch of combined styles throughout your catalog. What bands or artists influenced you? ANy bands that really changed you?

The Agency...: I spoke to the others about this. For Andy the Beatles were a big influence and discovering them really changed the way he approached music. But Andy has dabbled and still dabbles in dance music and trance. Steve also digs the Beatles but mentioned Velvet Underground and Pink Floyd among his influences. He’s also a fan of Godspeed You! Black Emperor, which helps explain our occasional post rock tangents. Ben has been really getting into classic son g writers like Tom Waits, Elton John and Rufus Wainwright. My tastes are so varied. I used to DJ Jazz, Soul, Funk and House Music, but I also love good song writing. So I never stopped listening to Bob Dylan (I’d sneak Dylan songs into DJ sets at the end of the night) and at the minute I’m getting into Christian Kjellvander in a big way. Anyway, I guess you put all those influences together in the shaker and you get something like the Agency…

TSWS: What's next for you guys? Anything in the works even now?

The Agency...: Lockdown has been productive and I more or less have the sketches for another album. We’ve already been memoing back and forth…hopefully we won’t be quite so long between albums this time.

The Agency...: We work. Andy is soundman on film and television productions. I’m busy working on a PhD at the moment. Otherwise we pick up what we can that allows us to keep making music.

The Agency...: We’d like to thank everyone for their support. We supper appreciate every listener – we’re a bit of a niche sound. And also, we promise to get the next record out for you all sooner.