An Interview With The Daily Spreadsheets 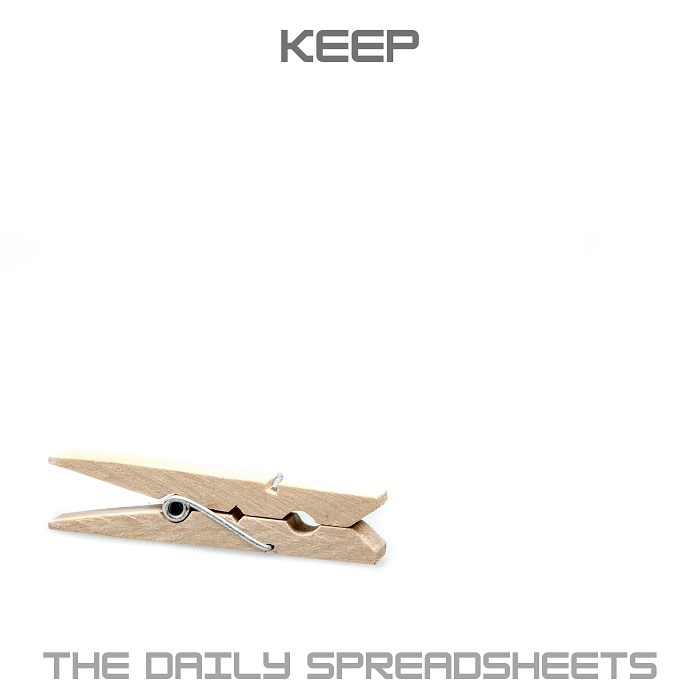 A brand new single from The Daily Spreadsheets brings that tasty pop-punk back with a bright and colorful vengeance with catchy guitars, and radio friendly rhythm, some classic rock influence, and more hooks than you can handle.

"Keep" is a vibrant and textured pop rock song that comes through with a sheen and polish that brings a warmth to everything and feels great to listen to as a whole.

There is that raw energy throughout the entire thing and the chorus sounds sweet and familiar almost like you've heard it before somewhere.

The track boasts some killer guitar melodies and vocals are refreshing and give the feel of old school Nada Surf and keeps to a classic 90's radio rock sound that feels like it should be in a montage scene of a film.

This was a shining example of straight forward, catchy, danceable, and clean rock music that becomes quickly infectious and has that summer time tonality to it that makes you just want more.

The song has a short but sweet vibe and when it's over you catch yourself humming melody lines in your head when you least expect it.

It really only takes one listen to get hooked on this single.

"Keep" is the latest in a string of singles released from The Daily Spreadsheets this year and each one gets better and better.

They all have a little something new to offer but stick to the staple sound the band has honed and is well worth your time to say the least.

With the release of "Keep" we wanted to have a chat with the band to find out where this came from and maybe even what's next for the band.

TSWS: Okay so let's start off with "Keep". This track has a bright pop rock vibe and feels like a warm
summer day! Where did this track come from?

T.D.S: So, it came from a weird place. I'm a huge fan of The Wonder Years, the TV show from the late
90's. There's a song in it which is a theme from Kevin & Winnie, "Wild Heart of the Young", by Karla
Bonoff. It's quite unknown outside the series fan circle, but it's a lovely late 70's pop ballad.
I was trying to write a ballad back in 2014, and the melody came out quite similar to "Wild Heart", at
least in my head. I recorded a rough demo and shelved it back then. Now, couple of months ago I was
searching for a hidden tune I could use with a pop-punk style arrangement, then I found that 2014
ballad and played it with an upbeat rhythm, it seemed to fit perfectly, in a way I can't even remember
anymore how it was before.

T.D.S: My first and biggest musical influences were and are The Beatles and The Beach Boys. They're the
strongest foundation in everything I do. When I reached my teenage years I was deeply into Britpop and
all things British rock at that moment, beside the fact that I was loving The Smashing Pumpkins too.
So, this pop-punk influence on my music came from bands like Ash, Supergrass, Feeder, Manic Street
Preachers, early Oasis, not from American acts like Green Day or blink 182 actually.

T.D.S: I'm a one-man-band at the moment, so for me it all started when I first heard The Beatles, back in
1992 and decided I wanted to be in a band and make worldwide success just like them. After that, from
1995 to 2006 I was always rehearsing, playing gigs, local festivals, released two CD's and even appeared
on national TV broadcasts. From 2006 to 2020 I kept writing songs and doing demos, while working 9 to 5,
going to college and paying bills nonstop, until a pandemic locked me down and I turned myself to music
24/7 again.

T.D.S: I got a huge amount of songs which I plan to consistently  record and release to see what happens
beyond my personal sense of accomplishment. As soon as I empty the shelves I'll try to focus on some
more contemporary in terms of songwriting, now as a forty-something in a world completely upside down
and falling apart.

T.D.S: Probably not touring as if I were a kid, but I would consider gathering some old mates to make a
sound in an alternative stage of one of these huge rock festivals all around.

TSWS: What are you all doing when you're not working on music?

T.D.S: I work for the government, but even before the pandemic I was already in the home office, so I do my
duty while I watch TV and listen to a lot of music.

TSWS: This track has some killer production. Do you guys have a home studio? How do you record your stuff?

T.D.S: Thank you! Apart from the drums, which were recorded and mixed by this Argentinian guy I hired
online named Guille Gardeazabal, I produce, record and mix all by myself. All in a spare bedroom with
my cheap gear and much noise coming from outside. For "Keep" I used online AI mastering service, and
I really liked how it sounded.

TSWS: Do you write songs together or is there one main songwriter?

T.D.S: I always wrote my songs all alone. I think it's such an intimate moment, I don't know if I would
ever be able to write with someone else watching me, although I know it could be great for improving
my skills.

T.D.S: I'm often listening to so many artists it's hard to point out a few, but I'm enjoying a lot of classic
pop rock bands from the late 70's like Heart and Journey. That was such a great time for rock and music in
general, 1975 to 1985!

TSWS: Can we expect anything more coming from you guys this year?

T.D.S: Sure, I plan on releasing some 5 or 6 more singles 'til the end of the year. The next two are
almost ready for mastering actually.

TSWS: You guys have a good chunk of followers on Spotify alone! Any advice you'd have for other up and
coming bands out there?

T.D.S: Consistency! Release all your stuff no matter if you're not 100% happy with how it sounds. I'm
always trying to connect with other artists, going after free promo stuff all around the internet,
pitching playlists. I have had some rough demos added to big playlists. You never know what's gonna
stick, so I think the better strategy is to keep releasing and making connections.

T.D.S: Well, thank you, I'm really glad you're enjoying my music and I'd love it if you could support The
Daily Spreadsheets by showing and talking about it to as many people as possible!