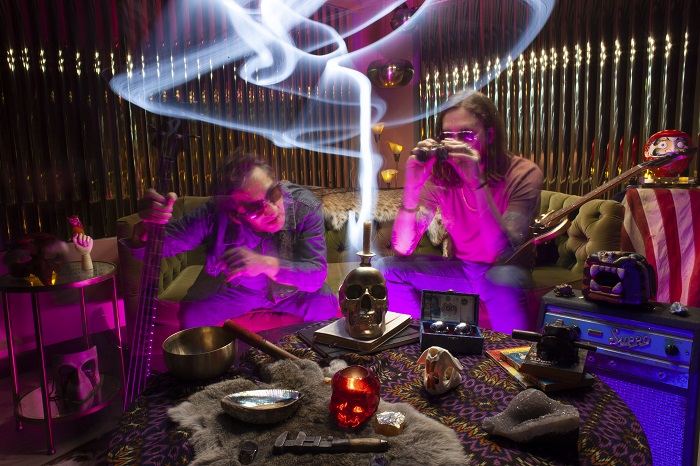 The latest release from The Gama Sennin is a righteous rock opus that gives off a desert rock sound fused with a real deal classic rock energy and approach and a youthful gusto that honestly, is hard to beat.

"I Kill You" is a blistering and bright track that rocks with swagger and style as vocals belt out hooks and guitars wail and fuzztoned bass bleeds through and drums smash with just the right vibrancy.

The track has life. It's alive and breathing and by the end you're singing along with the chorus, outloud in the car or in your living room.

Really this track gives off a sort of live performance feeling to it. Like the players are feeding off of each other's energies and this is part of why it has that live sound to it.

It's like Queens Of The Stone Age meets MC5 and listened to some Foo Fighters but wanted it all to be a touch grittier.

The song does have that added edge to it but still comes through ultra tight and packs one hell of a punch.

It's alternative radio rock with a colorful power behind it that sticks.

"I Kill You" has balls and style and we need more of that in rock music as a whole.

This track doesn't really follow as much as it does lead.

You can also just hear how much fun they must have had making this song. That bleeds through really heavily and you do feel like you've just seen them live after the song is over.

It's refreshing to hear some straight up Rock N' Roll that can scoop you up like this track does.

Now, " I Kill You" is part of their full length album that actually just dropped and the whole thing has that staple feel and sound thank god.

The record boasts influences like Iggy Pop & The Stooges and each track has something a bit different to offer.

We suggest digging into this record especially if you're a fan of real deal rock music.