An Interview With The Walk Offs 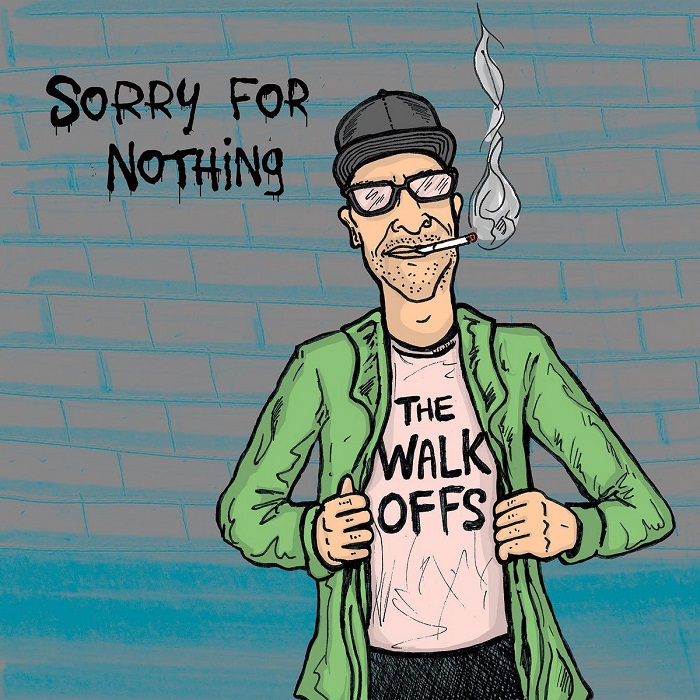 A new release from The Walk Offs brings on some classic punk rock style and swagger complete with ripping guitars, a killer attitude, and more hooks than you can sing along to.

The Sorry For Nothing EP is packed with fun fun fun in the form of fists in the air, shout out loud bangers.

A nearly perfect classic rock and pop punk feel the band gives off that Ramones tonality and the songs are super addicting and just a damn good time.

The record really makes you want to see these gus live in person as it feels like it would just be a great performance.

The EP itself shows the bands character and presence enough to jump around the room using any random object as a microphone and air guitaring until you drop.

Pretty much all of these tracks should be in a movie somewhere and it's all quite colorful and bright but not without its edge.

There are even some southern rock elements that peek through at times and give the release added flavor.

Sorry For Nothing is a power packed summer EP that you can cruise to and have yourself some fun.

This record certainly gets you in a good mood as well which can be much needed these days.

By the 2nd time through the release, you know most of the choruses and you feel almost like you're in the band.

Guitars are tasteful and perfected but still loose soulful and vocals are loaded with melodic and metallic attitude that works.

With such an awesome release, we wanted to have a sit down with the band and find out where this all comes from and where it's all going.

TSWS: Okay so let's start with the Sorry For Nothing EP. This record had a folk rock style but also classic punk rock undertones. Great combo! Where did this EP come from?

First off the band is Rob Hankosky - Guitars, vocals, Frank Lewis - Drums, backing vocals, Nate Jaworski - Bass Fred Fechter - New guitarist but he did play bass on "Sorry For Nothing",  Dave Guerrero - Old guitarist who played on "Sorry For Nothing" Me, Frank & Fred are all old punk rockers so that's cool you caught that vibe from the songs.

I'm a big Replacements & Clash fan so I mix a lot of those influences when writing my songs. Wilco is starting to creep in as well. But yes I do love the classic punk rock sounds. Steve Jones had great tone. The recording of the songs came by accident. We had a mid-west tour planned in July 2020 that was canceled because of Covid. The money we had saved for the tour we used to go to the studio.  Dave came up with the name “Sorry For Nothing”. We are all veteran players and the logo "Sorry For Nothing" seemed appropriate.

My biggest influence would have to be The Replacements. The Clash's recording are all so damn good. The urgency in Joes voice and the bands playing grabs me. Growing up The Sex Pistols were huge. Tommy Stinson has a band called Bash & Pop that is straight up R-N-R. Supersuckers rock & country songs are great. Wilco to Black Flag to Bad Religion. Alejandro Escovedo is a great songwriter.  I could go on & on.

Well Frank & I have been playing in bands for about 30 years. Fred has been included in about 15. For me it was plugging in a guitar cable to an amp and cranking it up. Playing lousy notes and playing anywhere that would have us. The Walk Offs is a continuation of that attitude. Plug in, play & see what comes out. I love it! The Walk Offs came together in 2017 with a batch of songs that I had. After a couple practices we decided to move in this direction. This band is all about moving forward. In 3 years we have recorded 3 cd's and have played all over the place.

TSWS: How does songwriting work for you? Do you guys write songs together? Riffs first or lyrics? Its different for everyone.

My favorite way to write a song is to already have the lyrics and then grab my guitar and just start playing chords. Eventually something will fit. I almost always have the song and then show the band and then they add their parts. Although on "Moving Forward", that was a song we would jam to to warm up for practice for about a year. I made up the initial chords and then added a small bridge. It really took a life of its own so I wrote some lyrics and boom. The song is actually one of my favorites on the cd.

Playing live! I love it. I love packing for the show, loading the gear, setting up. The anticipation while driving to the show. I like it all. We've already played a handful this year and it was a complete blast. Otto Records has some stuff coming up for the fall that we will be doing. I'm always writing so we may try the studio again as well. With Fred joining the band as a permanent member I'm really excited to see what happens next.

It's so un-rock-n-roll to say but I couldn't careless. We all have jobs and families. We all get great support from them. I dig the beach and the bars at the beach.

You've been releasing songs on Spotify since 2018! What sort of advice would you have for up and coming bands out there? I don't know if its advice or a sad fact but don't plan on making any money from Spotify. It's a double edge sword. I think bands are getting ripped off in the format. That being said our music get out all over the world thru Spotify. Make your music and put it out anyway you can.

TSWS: Okay so you wake up in the middle of the night starving! What's all of your go-to midnight snacks? (a question of character here)

Pizza. In the movie Sid & Nancy,  Sid has a line that goes "Pizza my favorite food"

TSWS: Before we go, is there anything you'd like to say to fans of the music?

Go out and support live music and the venues. The touring bands and venues have been hurting long enough. Support the community of music. We are all in this together. Buy their merch. Nobody is gonna get rich from this but it does show support and that's what the music scenes need right now.