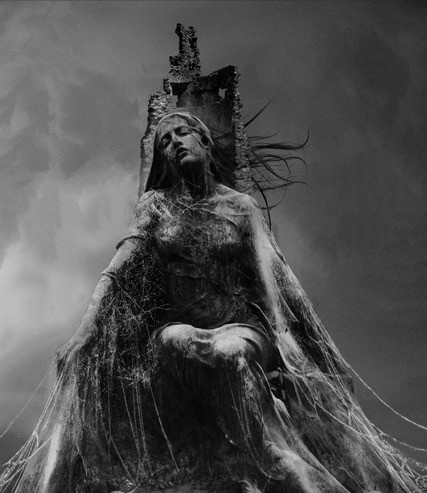 Theyrgy just dropped a 5 track EP dubbed Exit Strategies and it beckons all the best elements of classic darkwave, post-punk and an alternative synth-pop style all rolled into one very vibrant and alive feeling record.

The record nails that late 90's aesthetic aura of underground and popular bands with a bit of doom and gloom.

Songs vary and each one has a little something new to offer including some great choruses and keys sounds that add so much to the atmosphere of the EP as a whole. The record feels very big especially for a 5 track release.

Some inventive combinations, hooks, and instrumentation coated in effects, distorted tones and cathedral reverb to get you nice and engulfed by its sonic presence.

Exit Strategies gives you that warm fuzzy feeling when you listen to it mainly because of the vocal attitude and character along with the synth and guitar work. It all comes together smoothly and the heart is still incredibly evident in every single song.

With such a great release, we wanted to sit down with Theyrgy to talk shop. Here is what went down.

TSWS: Let's start with the Exit Strategies EP. This record has a darkwaveundertone with synths and rock infused sounds. Where did this record come from?

John Doyle:Well, it really all started from the ashes of I Decline, a band I’d been a part of for close to 20+ years.Having sort of shelved that project, I was eager to create new music that was a departure from thatband, stylistically. Jack and I had been working on music together on and off for a number of years buthad yet to release a record together. I reached out to Jack one day and we decided to get togetherand improvise some new music.It had been a long time coming, really. Jack and I were both yearning for a musical departure from ourindividual projects of I Decline and Yakuza. We also had a nostalgic draw to the musical tastes of ouryouth such as Wax Trax era bands, Post-punk and New Wave. It was only fitting one day that Ihappened upon a social media feed where my childhood friend, Mike Fabiano posted a photo of hisrecently acquired modular synthesizer. I reached out asking if he’d be into jamming with Jack and I.That first rehearsal was so inspiring that shortly thereafter Tony came into the fold, and we were off tothe races. It was all very organic. It just felt right.As far as “Exit Strategies“ goes, that record really depicts our collective exits from prior projects aswell as a rebirth of sorts. The songs germinated from that initial jam session with exception of the track“Walk Away”. That track was written close to 20 years ago while I was in I Decline. It wasn’t stylisticallyappropriate for that project, so I shelved it. The guys in Theyrgy urged me to dust it off and rework itwith them. The rest of the tracks are all very much coming from a spiritual place. One of magic andwonder. We all share a fascination with the occult and unexplained phenomenon. I think that’s why thebands name has its origin from “white magic”.

TSWS: With such a killer mix of sounds, what bands really influenced you?

John Doyle:We have a mixed bag of influences, but certainly this project is centered around an eclecticinterpretation of new wave and post punk stuff like Depeche Mode, Joy Division, the Cure. We’re alsovery much influenced by abstract, aggressive artists like Godflesh and Scorn. Shoegaze is also ofnote. We’re all over the map. I think vocally, I tend to be truly inspired by female vocalists with a tingefor lyrical complexity and that really emote. Artists like Florence and the Machine, Lorde, Tori Amos.

John Doyle:For me, my foray into music started in High School with a band called Blu Laugthr. That was withmyself, Pat McLaughlin on bass and vocals (I Decline) and John Conta on guitars and vocals. Wayback in 1995 we were making some pretty crushing psychedelic rock. We never put that stuff out but Iknow Jack has talked about trying to remaster the demos for Dead Sage Records.

John Doyle:We are incredibly excited to be wrapping up our sophmore release right now. We're having it masteredby the legendary Howie Weinberg (RHCP, The Cure, Killers, Rammstein) and its sounding amazing.We also hope this pandemic lock down subsides with vaccines reaching the public, so that we can finally perform the new repertoire live. We'll likely be doing some video efforts as well, to accompanythe new release at some point.What kind of non-musical things inspire you to write?John Doyle:Personally, I find standup comics inspiring. Their ability to command an audience and especially digthemselves out of a hole is so exceptional. I'd love to somehow channel that into our ownperformances live. I also really love visual artists like Karyn Jerzyk, Mirek, Florian Bertmer, justcountless artists that are making incredible work. Besides that, I think Jack and I have a mutualappreciation for True Crime stories and the whole band is fascinated with the occult and just mysticismin general.

John Doyle:I work as an Audiovisual design consultant, where I help organizations outfit their facilitieswith the appropriate sound reinforcement and video support to run their meetings and events.I also dabble in acoustic design. Jack is an audio engineer and producer who just secured hisownership of a recording studio, which is super exciting! Tony and Mike do IT support for aliving. Besides work, I have 2 daughters aged 1 and 5.

TSWS: What kind of advice would you have for up and coming aspiringartists trying to get heard?

John Doyle:Just keep pushing hard on capturing your work on media and get it out there on all the platforms(Spotify, Apple music, etc.). Besides that, you gotta spend some time on your public persona, getyour message out through social media sure but I think finding other means to promote your music iskey. We don't all live on islands. It takes a village.

TSWS: What kind of recording hardware and software do you use to recordyour stuff?

John Doyle:We use Logic Pro and a ton of great mics, mic pres and compressors in Jack's arsenal.

TSWS: Before we go, what would you say to fans of the music?

John Doyle:Thank you for all the support and love. We hope to bring you more and more music and art soon.Please continue to subscribe to our artist platforms and share our music with the ones you love!