An Interview With Three At Home 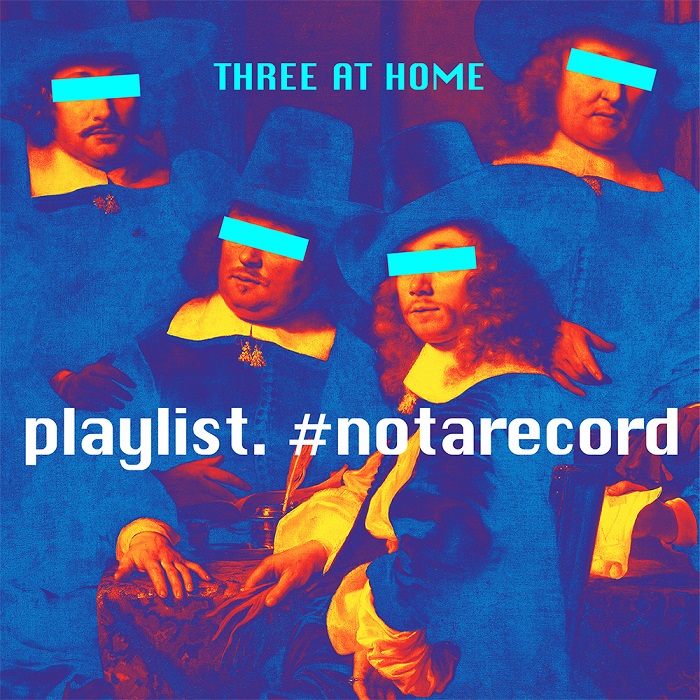 A new release from Three At Home hits all the soulful sweet spots you can handle with tasteful organs, acoustic pop, and sultry vocals that take you on a musical journey with each track.

The album is called playlist. #notarecord and it's got a ton of driving pop force behind it with a contemporary undertone and a theatrical feel.

These songs do really sound like you are watching a play and each one is a new act.

Power pop choruses, rocked out hooks, and duet vocals all draw you in and tell stories in detail as percussion creates the alive and breathing sound the band feeds off of.

You can clearly hear classic rock influence and alternative edge that peeks through complete with 90's radio rock vibes and insanely catchy tunes that give way for the next until the albums end.

These tracks are addicting and super colorful and most can get you shaking your ass in your seat.

Both singers bounce off each other with ease and every single instrument complements the other so well it's crazy.

The songs have power and gusto as the band seems to have this one massive energy that makes everything alluring and fun.

With such a great release, we wanted to talk shop with Three At Home to find out where this all came from.

TSWS: Okay so let's start things off with the Playlist. #notarecord...well, record. This album has a cinematic indie-rock vibe to it and fuses some classic rock elements and theatrical styles. Where did this record come from?

TAH: Back in 2018, we played a release show for our EP, Perfectly Unclear, with a loud band – including a horn section! – for a packed house at The Burren in Somerville, MA. We had been playing as a duo for a couple of years prior to that, and still do, but realized that ultimately, that’s where our music sounds best. We wanted that to come across on the notarecord.

A few of the songs were solo tunes for each of us that got absorbed into the band repertoire. (Dann actually released “We Were There” and “Two Roads” previously as a solo artist.) A lot of them were tunes we’ve been working on over the last several years but haven’t had a chance to record and release.

TAH: Our usual elevator pitch is if Bruce Springsteen and Sara Bareilles formed a duo, and asked The Black Keys and/or Fleetwood Mac to be their backing band, that would be pretty close to what we sound like. Specifically, Mary listened to a lot of 90s R&B growing up and Dann was steeped in bands like Counting Crows and Pearl Jam.

TSWS: You guys are a duo and the songs come through ultra strong! Do you both take on multiple instruments?

TAH: In studio, we were joined by our producer, acclaimed songwriter and Berklee professor George Woods on lead guitar, and our engineer Patrick Hanlin (RevivalHouse Records, Kid:Nap:Kin, Rebuilder, Billy Gilman, Dead Messengers) on drums and organ.

TAH: There is evidence that we have known each other for much longer, but we remember meeting at an open mic in 2013 and bonding over the fact that we’re both parents. When “Dearly Departed” by Shakey Graves & Esme Patterson was getting regular radio play, Mary asked Dann to cover it with her. It went so well that we decided to form a band, and played our first show together at the beginning of 2016. By 2017, we had started writing and playing together regularly, and the rest is history.

TAH: The pandemic has complicated the release process of “playlist. #notarecord” and the next thing in our minds is continuing to get the music to people and have them be excited about it. We’re planning a proper release party for the fall AC (After Covid) and even a tour for April 2022. In June, we’re headed back into the studio to record a handful of acoustic tracks that will be released as we tour next spring.

TAH: We’re both parents of two kids apiece, which of course is an important part of each of our lives. Additionally, Dann is a teacher at Boston College High School in Boston, MA, and Mary teaches private lessons and has directed musicals at multiple high schools in Massachusetts.

TAH: Dann has been obsessed with The Hold Steady recently as well as Chulahoma, The Black Keys’ album of Junior Kimbrough covers, especially when doing work for his grad classes. Mary has been reliving her 90s youth by relistening to Lauryn Hill, En Vogue, Mariah Carey, and Destiny’s Child.

TSWS: You guys have been dropping songs on Spotify since 2017! Any advice you'd give to other up and coming bands out there?

TAH: Don’t stop doing the thing because somebody tells you to or because you think you’re supposed to. If you love it there is no reason to walk away.

TSWS: Now that things are getting better slowly but surely, will you be putting any focus on live performances?

TAH: We have built a great online community around our weekly pandemic livestream show, SpotiFriday LIVE, where we each cover a handful of tunes on a theme. We started last March and have been going strong for the last 14 months, so we don’t want to completely abandon that community spread throughout the world.

TAH: That said, we just played our first show together in months on May 1st, and we cannot wait to play together in front of a crowd this summer and into the fall. We’re booking shows now if anyone is interested! ;)

TSWS: Okay so you each wake up in the middle of the night starving. What's your go-to midnight snack? (this is a question of character)

Mary: something salty and quick, probably CheezIts, maybe a handful of almonds if I feel like my vegetarian self needs some protein.

Dann: in a perfect world, there will always be leftover pizza in the fridge, and there is something amazing about cold pepperoni pizza when it’s late (or early) and you’re hungry.

TSWS: Can we expect any music videos for any tracks off the EP?

TSWS: How do you write your songs? Is it piano or guitar chords first? Lyrics? How does it work for you guys?

TAH: Definitely depends on the song. For example, on “Fill It Up,” Mary brought it to Dann almost fully written and he helped to perfect the chorus. “Just Like This” started on Dann’s parents’ piano when he went home to visit for Christmas.

We live about an hour’s drive apart from one another, so historically a lot of our songwriting has been over voice memo and texting, with once-a-month marathon work days. The pandemic has definitely put a hold on a lot of that, so we’re super excited to get back to working on tunes in person again.

TAH: THANK YOU. We have an amazing, fierce, loving community around our music, and we’re excited to see it expand. We are humbled with the amount of money we have been able to donate to different social justice and relief causes in the last year from livestream tips, in addition to keeping the lights on at our respective houses. We can’t wait to feed off the energy of a live show and promise to give that energy back to the audience exponentially.