An Interview With Tricia Fitz 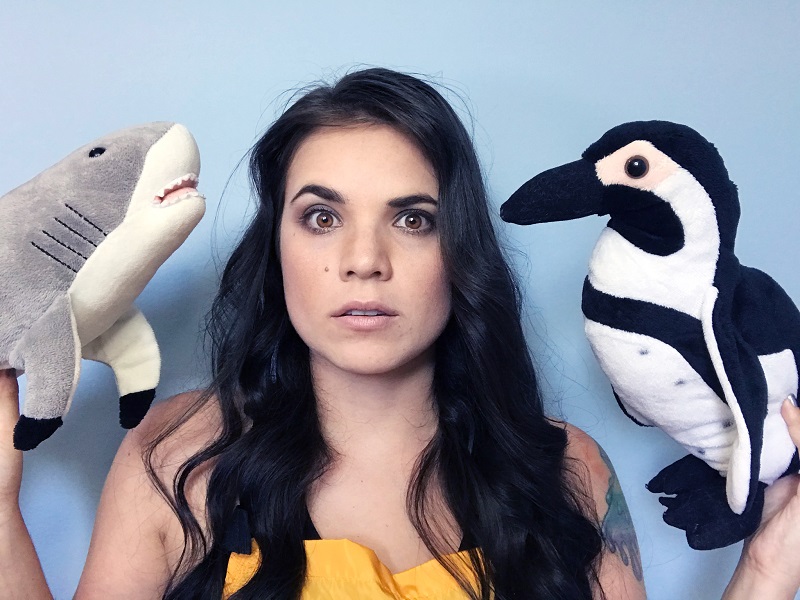 The new single from Tricia Fitz is an absolute testament to a certain generation and it's a total rock anthem from top to bottom.

"Millennials" is a powerhouse of a pop rock opus that brings a bright and alternative edge to the table with a colorful character and vibrancy that becomes insanely addicting.

Tricia's got one hell of a set of pipes as she belts her hands in the air, sing-along chorus and holds on theat punk attitude and undertone.

Guitars give a massive sonic presence and you can literally hear the amount of fun the artist had recording this track (as a matter of fast, you can watch it on her website as well).

"Millennials" comes with an endlessly fun music video that really amplifies Tricia's character even more and you can get a great feel for her sense of humor, if you haven't picked up on that from the song already that is.

The single is part of a full length album release dubbed Epic Penguin Sharks and the record has a refreshing pop sound with a tasteful hard rock sound that makes the whole thing feel good to listen to.

The album is filled with some outstanding tracks that certainly don't abandon her humorous touch but also has other layers to peel back. It's a killer record and should be cranked throughout its course.

With such a huge album, we wanted to have a chat with the artist to find out where it all came from and maybe even what's next for her.

TSWS: Okay so let's start with the Epic Penguin Sharks album. This record has a major fusion of

pop, alternative rock, and a humorous and fun attitude. Where did this record come

There are so many sides to Epic Penguin Sharks, but I deliberately choose to highlight the

bright side of it. To sum it up, EPS was a way to remind myself that happiness comes from

within. I found myself giving up after constantly being told that I was out of my prime and will

never amount to anything. I was very close to waving my white flag once and for all, until a little

voice inside said, “You know what? Let’s toss the rule book out the window. Forget what anyone

thinks or says, and let’s see how far we can take this creatively.” and I did exactly that. That

music. I’m now the happiest I’ve ever been and this album was the guiding light I needed. So

positivity, and I want that to spread to others like...a pandemic. (Too soon? You can take that

out if it’s too much. “Like butter on a hot piece of toast” There, that’s more family friendly.)

TSWS: This felt like a massive record! Did it take you long to complete and are you happy with

how it turned out?

It was! It took roughly 4 years to complete from the moment I came up with the concept to its

midnight release. I didn’t give myself a specific timeline because I wanted ideas to come

organically, and I think that worked in my favour. I worked with mostly one other person, Matt

Nozetz, who was the recording engineer and co-producer on the album, and we REALLY took

our sweet time. A lot of things sat and marinaded for months before we even thought about

touching them again, and some things were spontaneous and fit perfectly right away. Not to

mention the huge delay because of the pandemic where I had to wait to finish recording vocals.

But it was all very carefully planned and stitched together, and I am extremely proud of the final

product. It was well worth the wait!

TSWS: I'm hearing all kinds of pop rock influences on here. Who are your actual biggest musical

I have a whole bunch of influences scattered here and there, depending on the song. It ranges

from Fall Out Boy to Avenged Sevenfold to Aqua to Queen. But in general, my biggest

influences are Devin Townsend, Andrew W.K. and Hobo Johnson. They’re all artists who have a

sense of humour and are clearly having the time of their lives while making music. I have so

much respect for them and want to be like them when I grow up.

staging and costuming and choreography. I also really wanted a singing role that sang a song

about baseball that I knew would make my parents point and say, “That’s my Tricia!” But in the

2nd graders and they gave me a small monologue. But yo, I’ve been after that creative high

So yeah, I’ve been musically inclined since I was very young. My home videos are all of me

amateur home videos) whether it be a musical, magic show, or me improvising Christmas

songs. I was a teenager when they finally let me take music lessons for voice, piano, guitar, and

it’s a hootenanny of a good time. Fast forward to today, I focus mostly on helping other artists. I

am a vocal and performance coach, artist mentor, and recently started my own music publishing

company. I work with music full time, mostly behind the scenes with my students. But this time,

I’ve decided to step into the spotlight myself just for fun.

TSWS: You've been dropping records on Spotify since 2016. What sort of advice would you give

to other up and coming bands trying to be heard?

It may seem I’ve only been making music since 2016, I have actually been at this as Tricia Fitz

since 2006. It’s been more than a decade of lessons, mistakes, regrets, exploring, more regrets,

and more mistakes...mostly mistakes. The music industry is incredibly cutthroat and constantly

upgrading and changing. Being in the big leagues is not for everybody and there is absolutely

nothing wrong with that and don’t let anybody tell you otherwise. Be honest with yourself and set

realistic goals, and you’ll never be disappointed. A little bit of wisdom goes a long way!

Not gonna lie; I’m pretty much working on music all the time, mostly in daydream format. But I

for relaxing while exercising creativity. I also absolutely adore spending time with my husband

and cats. We’re expecting our first child soon, so I’m assuming once she makes her debut, I’ll

LP and Mother Mother have been the latest obsessions. LP has inspired me to learn to whistle

and while I am failing pretty badly at it at the moment, it’s ok cause I know I am good at other

things. I try to listen to a lot of local and independent artists as well, as there are some true

hidden gems out there that really deserve some more attention.

You wake up in the middle of the night starving. What's your go to midnight snack? (A

Fun fact: I’m a diagnosed Nyctophobic, which essentially means I am terrified of darkness and

tend to avoid it at all costs. I’ve gotten way better over time, and have done some awesome

exposure therapy to power through it...which sometimes I do...but most times I don’t. So

basically, I would probably starve until morning. BUT, in the beautiful daytime when the light is

blasting through my windows, you’ll find me snacking on grapes, salted cashews, or ice cream

Gotta find a way to follow Epic Penguin Sharks somehow... But I still have some cool behind

the scenes videos coming, perhaps maybe an acoustic version of some of the tracks off the

album, and maybe perhaps who knows a live performance? It’s really hard to plan around the

pandemic, but I’m staying optimistic as always! But I will say: the next album is already in its

fetus stages, but that’s not for like another 3 years so can’t say much about it at the moment.

I am always eternally grateful for those who took the time to listen, share, tag, comment, and

engage. It’s been really cool to see how many people have resonated with the album, despite its

unconventional title and format. Don’t be shy to say hi, and once again thank you for giving the