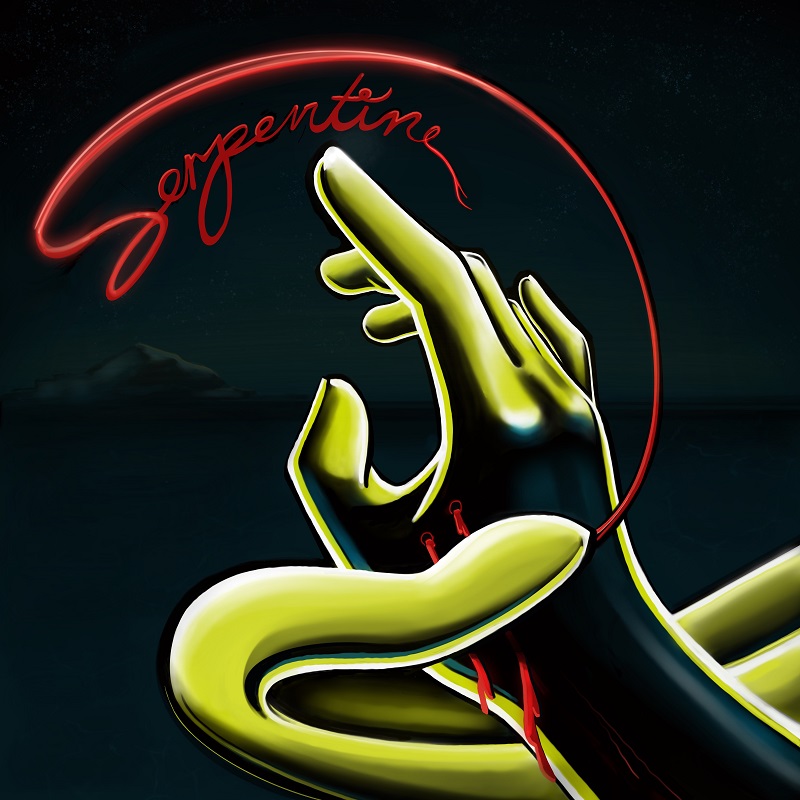 We recently had the chance to have a chat with the gang to find out more about where this all came from. Here's wha happened.

TSWS: Okay let's start things off with "Serpentine". This track is pretty hard hitting with some edge to it as well. Where did this track  actually come from?

Shawn: Elisabeth's brain and a lot of band practice.

Mitch: Yes, lot’s of practice for that one. Elisabeth usually starts with the core ideas/form/riffs etc for the song and then we all workshop it together in practice, adding new ideas and getting it in sync with each other. Seems to work well for us.

Elisabeth: Weirdly enough, it’s compiled mostly from the words of an Edgar Allen Poe poem called “dreamland”... but the original idea was just to write a dark and edgy song that followed the storyline of our album: where the main character is betrayed. I wrote the concept and then came across the poem when doing some research. Everything fell into place when the band was introduced to the song idea and it just took wings.

Marc: Trying not to repeat what everyone else said the process for this one was kind of interesting actually. I think we wrote the outro 2 days before (maybe even the day before) getting into the studio  to track it and ran with an idea from Shawn’s head. Then my part in the choruses was a total accident, because I was actually just playing 1 note at practice because I was having a brain block and didn’t know what else to play. Everyone seemed to like it though so it stayed.

TSWS: So what's next for you guys? You have an album releasing soon correct?

Elisabeth: Yeah! Long time in the works! We plan to release it February 12th.

Marc: This is really just the first half of a longer album, so after this release we will have no choice but to finish the second half of the album. So there’s reason to stay tuned for the rest!

Shawn: I came across this band looking for a guitarist on Craigslist. Every once and a while the moons align on there and you hit the lottery.

Mitch: I also came on board later as a Craigslist find. The power of the internet.  I was looking for a group to gig out with and liked what they were doing with all the original stuff. Shawn is right though, the stars really aligned because we all mesh well together I think.

Elisabeth: I always wanted to write progressive music but had previously only dabbled in singer songwriter type music, jazz, and pop - after meeting Shawn and Mitch the music just kind of lead itself to where we are now. I made a very specific ad on Craigslist that lead us to find Shawn. Shawn then wrote an ad and we found Mitch. I love the group we have- Definitely no longer underestimate craigslist!

Marc: Elisabeth and I met in college and have been playing music together since then. So we’ve been in various configurations of bands together and separate in the past but have never clicked into place with a group the way we have as the four of us here.

TSWS: Will we hear more songs  like "Serpentine" on the album?

Shawn: I think you'll find there's a bunch of moments that sound like they're related, but in some other interesting contexts.

Mitch: Each song has its own personality but each share common themes. I think that’s the ideal scenario.

Elisabeth: Not “no” but also not “yes”...its somehow our specialty. You can tell the songs share the same blood but the mood is different. Mitch kinda nailed it.

Marc: The album definitely fits together as a whole piece, but there’s definitely variation between the songs and a lot for people to grab onto. So the short answer, like everyone has said, is yes and no.

TSWS: What bands and artists really influenced you?

Shawn: I love that we all have different influences. I'm big into Bowie, King Crimson, Soundgarden, and Queens of The Stone Age. This band lets me take my influences a bit out of their element, it's a lot of fun.

Mitch: My influences change all the time. Lately I’ve been listening to a lot of ambient and drone music, stuff like Brian Eno, Gas, The Necks, things that maybe don’t have a lot of drums. I really like improvisational music and that’s what my playing is rooted in.

Elisabeth: I grew up with the Beach Boys and the Beatles, but also love progressive/ avant garde artist like Ben Allison, Gavin Castleton, Tool, The Dear Hunter, Baroness...I like dissonance with amazing harmony and time changes. Obviously female bassists inspire me as well. Tal Wikenfeld’s new album is DOPE.

Marc: I think we all have a wide variety of listening habits, which is pretty reflected in our overall wound.  If I had to say most commonly these days I find myself listening to a lot of instrumental music, everywhere from ambient film soundtrack to instrumental metal and post rock, like Russian Circles, Pelican, Animals as Leaders, Covet, Explosions in the Sky. That sort of thing.

Shawn: Does watching and reading things about music count?

Mitch: Teaching music...work on other music projects....also listen to and read about music… Oh, I got really into chess over quarantine!

Elisabeth: I teach music to little nuggets (kids) in a public school. In my free time I like to draw portraits and make complicated cocktails.

Marc: I watch an embarrassing amount of youtube content. A lot of music and music gear videos (probably too much), but also content from makers, artists, and woodworkers. I guess a big hobby of mine as well is to work on and build guitars, so I guess that’s a spot where those worlds collide.

Shawn: When someone has a great song that needs some guitar, another guitar part I could accompany, a tasty riff, or a cool drum part.

Mitch: When I hear new sounds or styles. Also my friends and the music they make.

Elisabeth: Looking at beautiful things and playing the piano. Not always together or in that order.

Marc: Either listening to or trying to create sounds or soundscapes with effects really inspires me to sit down and write. Things like hearing a sound or texture in a movie or television score and figuring out how to jam that into one of our songs is one of my favorite things to do.

TSWS: Do you get together for rehearsal?

Mitch: In the before times we did a lot. I eagerly await the return of rehearsals.

Shawn: I second that. Rehearsal is my second favorite thing in life.

Marc: I miss everyone.

vWill you be focusing on playing live when the time comes?

Shawn: Playing live is my actual favorite thing in life.

Mitch: Yes I really hope, I miss it a lot.

Marc: No need for me to add anything here. Haha.

TSWS: What sort of advice would you have for other up and coming bands out there trying to get heard?

Shawn: If you make it as genuine as possible then listeners will keep coming back.

MItch: Exactly what Shawn said. Make what you want to make and chances are someone will also like it as much as you.

Elisabeth: Make sure YOU love what you’re creating. It can be pressure to get music out, but people can smell that pressure and the music can suffer. Hearing a song that you know the artist is proud of is like butter. Mmmmm!

Marc: I think for me a big part is to do whatever you want and don’t worry about trying to confirm to a certain genre or sound. So much of my favorite music happens when someone does something they’re not supposed to do. So if you want to be the next jazz fusion band with an acoustic rhythm section and a lead accordion player then go for it. And please send me your demo.

Shawn: Thank you, and I can't wait for you all to hear the rest of the songs.

Mitch: A big old thanks and also wear your mask so we can play a release show (hopefully) in the fall :)

Elisabeth: Thank you! We are always so flattered and grateful for everyone who has/is supported/ing our music.

Marc: Same for me. Thank you all , we can’t wait to see you all again, and hopefully meet some new folks when the time comes!